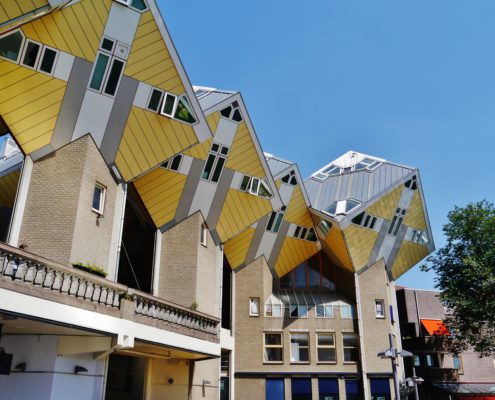 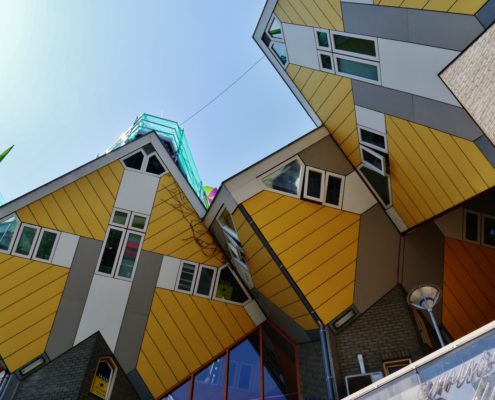 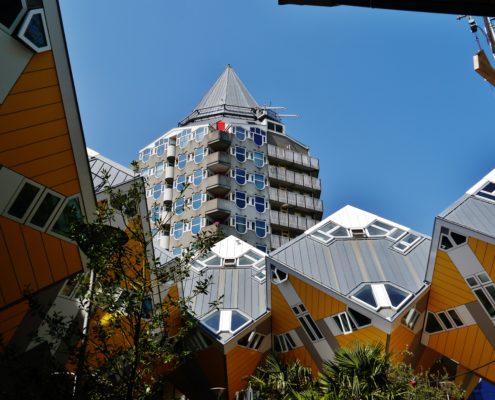 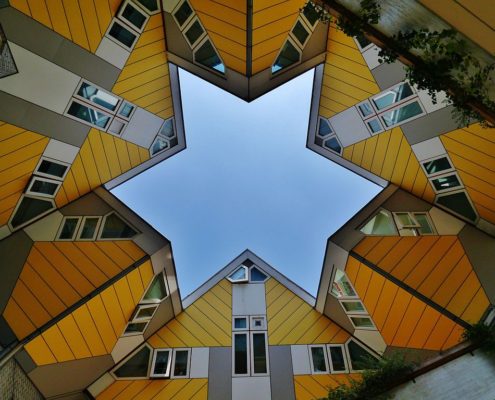 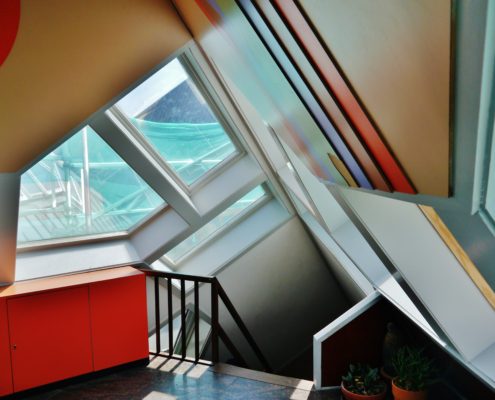 A popular tourist attraction and bizarre architectural experiment, the Kubuswoningen is located in the Oude Haven, the most historic section of Rotterdam's port. Following the destruction of the Oude Haven during the Second World War, architect Piet Blom was asked to redevelop the area with architecture of character, presenting him the opportunity to apply his earlier cube housing exploration in Helmond to a more urban context. Known for his desire to challenge conventions, Blom did not want the Kubuswoningen to resemble typical housing; he strived to dissolve the attitude that “a building has to be recognizable as a house for it to qualify as housing.” During a time when the rebuilding of Rotterdam was pivotal, the Kubuswoningen served as an influential precedent for progressive and innovative architectural development.

Few buildings survived the 1940 bombing of the Oude Haven. As a result of a change in government in 1974, urban regeneration and housing became top priorities for the municipal council. Hans Mentink, the politician in charge of spatial planning at the time, had grown tired of the utilitarian architecture which was increasingly prevalent and believed that Rotterdam was in need of architecture with some life in it.

Impressed by Blom's cube houses in Helmond, Mentink awarded him the contract to create a development plan for the Oude Haven area. Having not had work since Helmond, Blom was both excited and motivated to do his best work for the city of Rotterdam; however, he was also overwhelmed by the challenges, importance, and scale of the project. Wanting to avoid a dominating intervention, he told his client that he would design it so that you cannot tell that it has been designed by one architect. This objective led Blom to divide the housing development into three distinct projects: Blaaktoren, a 13-story hexagonal apartment tower that resembles the shape of a pencil; Spaanse Kade, a complex of terraced buildings that surrounds an inner courtyard; and the Kubuswoningen, a succeeding exploration of cube houses on a larger-scale grid. The municipal council appreciated this, as they believed that Rotterdam needed more than just cubic housing. The entire development contains 270 dwellings, 1000 square meters of catering and shops, and parking for 300 cars.