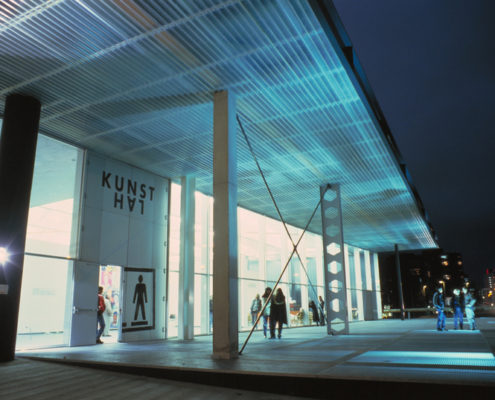 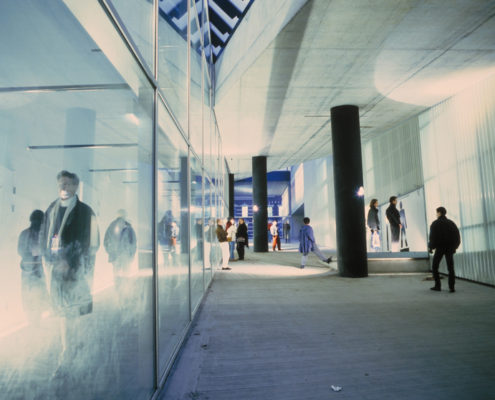 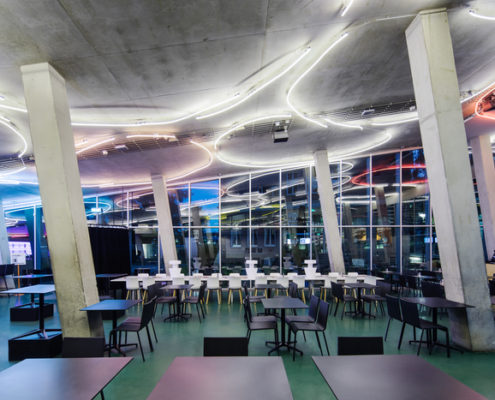 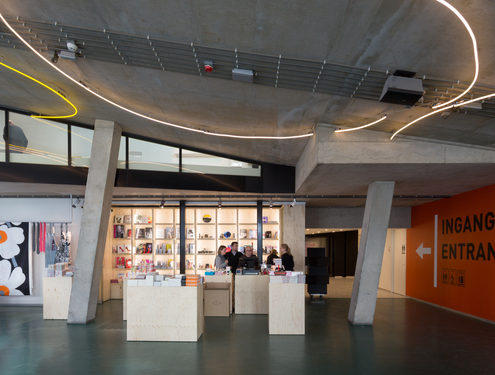 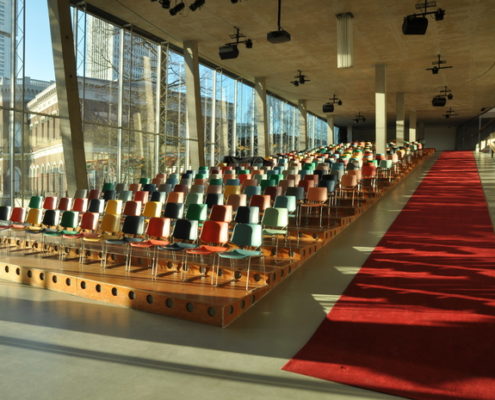 The Kunsthal combines 3300 square meters of exhibition space, an auditorium and restaurant into one compact design. Sloping floor planes and a series of tightly organized ramps provide seamless connection between the three large exhibition halls and two intimate galleries. Its position, wedged between a busy highway and the network of museums and green spaces known as the museum park, allows it to function as a gateway to Rotterdam's most prized cultural amenities.

The program demanded three major exhibition spaces - to be used jointly or separately, an auditorium and an independently accessible restaurant.

The site presents a dual condition: the southern edge is bordered by the Maasboulevard, a 'highway' on top of a dike. The northern side, a level lower, faces the Museum Park - conventional contemplation. The building was conceived as a square crossed by two routes: one, a road running east / west, parallel to the Maasboulevard; the other, a public ramp extending the north/south axis of the Museum Park.

With these givens, and the fact that these crossings would divide the square into four parts, the challenge became: how to design a museum as four autonomous projects - a sequence of contradictory experiences which would nevertheless form a continuous spiral. In other words, how to imagine a spiral in four separate squares. The concept of the building is a continuous circuit.

The pedestrian ramp is split, with a glass wall separating the outside, which is open to the public, from the inside, which is part of the circuit. A second ramp, running parallel and reversed, is terraced to accommodate an auditorium, and beneath it the restaurant. On the level where the two ramps cross, the main entrance is defined. From there the visitor enters a second ramp which goes down to the park and up to the dikelevel.

Approaching the first hall, one confronts a stairway and an obstructed view, which is gradually revealed - a landscape of tree-columns with a backdrop of greenery framed, and sometimes distorted by the different types of glass of the park facade. From there one follows the inner ramp leading to hall 2, a wide open skylit space facing the boulevard. A third ramp along a roof garden leads to a more intimate single-height hall and further on to the roof terrace.