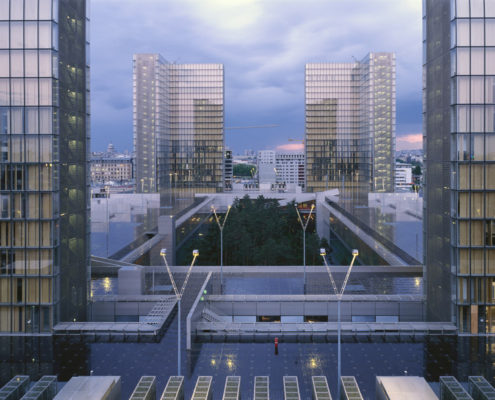 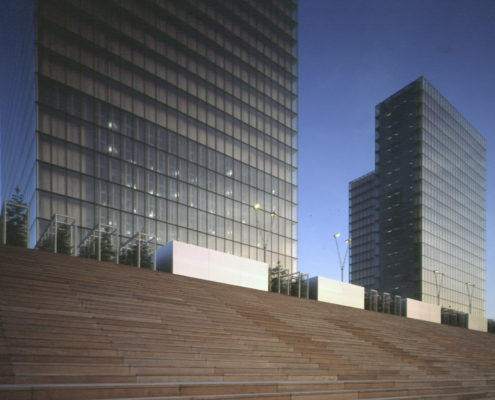 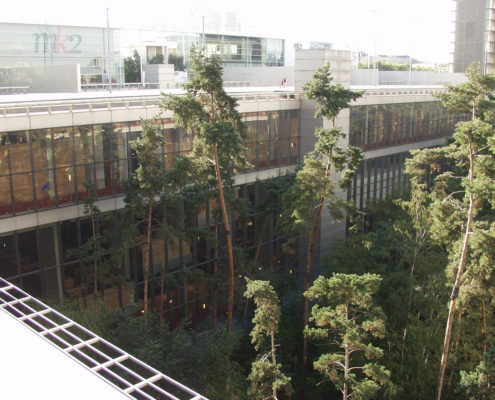 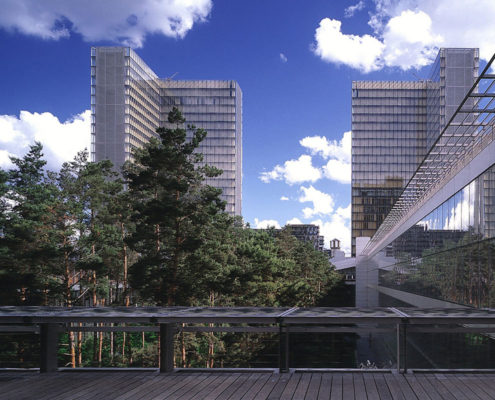 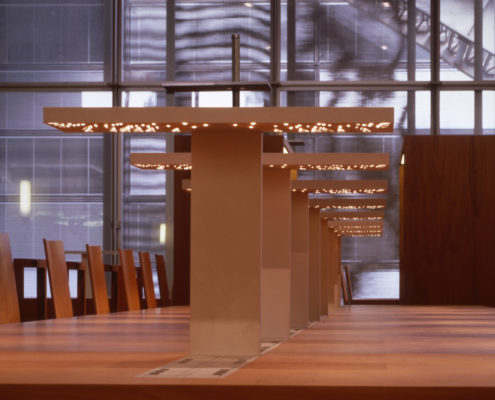 On the banks of the river Seine, just east of the Île de la Cité and downtown Paris, stand the four glittering towers of the National Library of France. Bent around the outskirts of a public esplanade, these towers are Dominique Perrault’s modern take on the age-old Parisian tradition of monumental public architecture. The project is both volume and void, enclosure and exposure, a juxtaposition of contrasting ideas that is as reverent of its place in a thousand-year-old legacy as it is deliberately self-critical.

The library began as the most ambitious in a long line of architectural undertakings—the Grands Projets—spearheaded by President François Mitterand in the 1980s and early 90s. Alongside the Arab World Institute, the Parc de la Villette, the famously controversial Pyramide at the Louvre, and others, these projects aimed to create a new set of modern monuments for a city long defined by its architecture.[1] In 1989, Mitterand launched a major competition to design the new national library, drawing entries from 244 architects around the world.[2] It was to the great astonishment of most when the young Frenchman, Perrault, won the contest at only thirty-six years of age.

Perrault’s design is a provocative play on the traditional role of great public architecture in Paris. It carries a sense of monumentality and visual iconicity that is, of course, familiar to Parisians, but the library is distinctly modern in affect and progressive in ethos. Frivolity and indulgence are spurned in favor of a language of minimalism. Classical arcades, stone carvings, and ornamental expressions of wealth and power are replaced by glass, steel, and weathered wood, the understated and economical palette of the urban masses and a throwback to midcentury ideals. In the interiors, red carpeting, natural woods, and elegant fixtures are stately but tastefully restrained.

For visitors and residents of the 13th Arrondissement, the library is accessible and inclusive, using its massive footprint not to appropriate but to create liberated public space. From the riverside, a dramatic block-long staircase leads visitors from the sidewalk to the public esplanade and elevated walkways that connect the four towers. Between its open design and its educational functions, the library is a programmatic and symbolic monument to socialist ideals, a quality surely not lost on the leftist President who enthusiastically sold the design to the French people.[3

At the core of the elevated esplanade is a vast central courtyard. It is hollowed out and filled in by trees, as if the urban environment had itself rotted out and been filled with life. Two hundred and fifty oaks, wild pines, and birches are planted within it, an oasis emerging from the ashes of a derelict industrial site.[4] The message of the design is clear: at the core of the project—and perhaps at the center of human knowledge—is nature, not man and his urbanism. In contrast with other models of Parisian monumental architecture, the building does not work to glorify itself, but rather to play with the drama of emptiness and void.

The surrounding enclosures, along with the towers themselves, contain a seemingly endless sequence of library facilities. Nearly 3,600 study spaces fill the reading rooms, adjacent to acres of offices, galleries, and conference rooms. With four hundred kilometers of shelves, the library's collection is capable of housing an astounding twenty million volumes, making it the largest book repository in France and among the largest in the world.

Although they are physically and symbolically displaced from the center of the project, the four corner towers were far from peripheral concerns for the architect. Built using an elaborate double facade, they are visually complex and layered, refracting a prismatic display of natural and artificial light that is both artistic expression and purposeful signage. Perrault describes his inspiration: "A diaphanous light will rise up through the interiors of the glass towers, culminating in four topmost points, which will shimmer like four lighthouse beacons. This liquid light will spread over the square, while the towers will be reflected in the Seine."

Upon its completion in 1995, the library received a bevy of prestigious international awards, including the European Union's Mies van der Rohe Award in 1996. But its critical reception was decidedly mixed, especially for those who had fought to steer architecture away from the decontextualized languages of post-war modernism that the library seemed to reincarnate. Anthony Vidler in particular cautioned against the urban consequences of Perrault's visions of "asphalt wilderness," arguing that the library "returns us to a contempt for the urban street not voiced with such ferocity since Le Corbusier's fulminations inL'Intransigeant in 1929."[6] Nevertheless, for the young Perrault, Mitterand's ambitious competition was nothing short of the commission of a lifetime, singlehandedly launching Perrault's since-prolific international career.

The Louvre Scroll to top