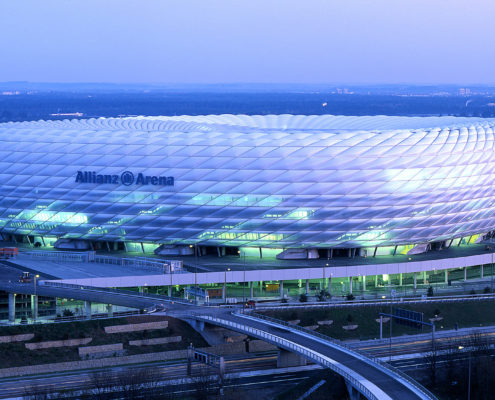 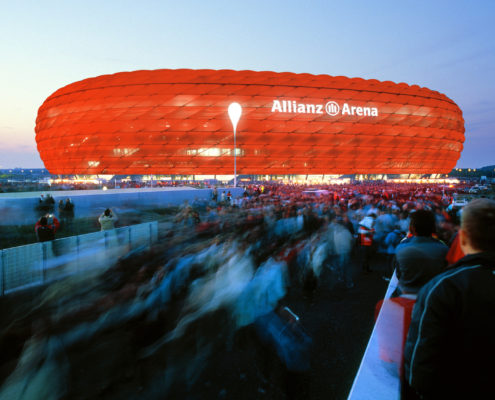 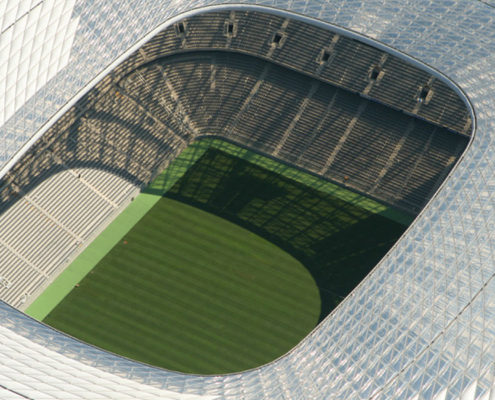 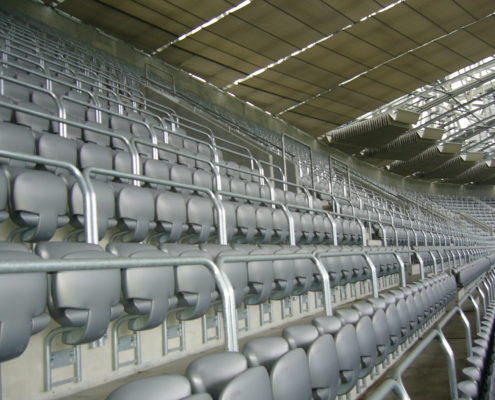 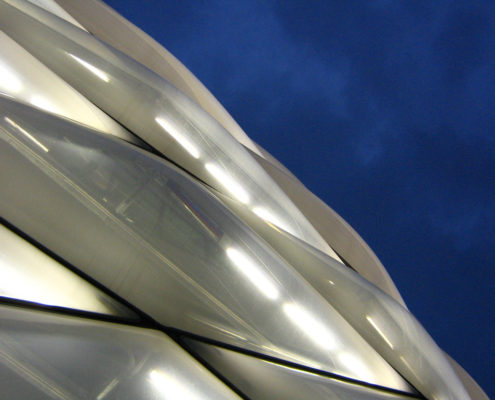 Three themes define our architectural and urban concept for the world championship football stadium in Munich (the Allianz Arena): the presence of the stadium as an illuminated body that can change its appearance and is situated in an open landscape, the procession-like arrival of fans in a landscaped area and the crater-like interior of the stadium itself

Both the shell and the structural skeleton of the stadium are designed throughout to implement these three key concerns. Hence, the main stairs along the outside of the shell follow the line of greatest slope, underscoring the procession-like approach of visitors to the stadium.

These themes lend the project its distinctive character, while other locations and rooms, such as the VIP Lounges, Lobbies, Catering Zones, etc., are functionally indistinguishable from those of other stadiums and are subject to the changes inevitably introduced by their users.

The stadium as an illuminated body

As a huge luminous body, the stadium marks a new location in the open landscape to the north between the airport and downtown Munich. The skin of the luminous body consists of large, shimmering white, diamond-shaped ETFE cushions, each of which can be illuminated separately in white, red or light blue. The football stadium will be the home of two local football clubs, FC Bayern Munich (club colours: red, white) and TSV 1860 (club colours: blue, white). The color of the cushions can be controlled digitally so that the home team playing in the stadium can be identified from the outside: Red for FC Bayern Munich, blue for TSV 1860. The changing appearance of the stadium will enhance its attraction as an urban monument even for people who are not interested in football.

The arrival of fans at the stadium

The car parks are laid out between the underground station and the stadium so as to create an artificial landscape for the arrival and departure of the fans. This landscape contains swathes of green that blend in with the vegetation of the surrounding Fröttmaning Heath. Meandering asphalt paths determine and shape the rhythm and flow of the throngs of visitors, somewhat like a procession.

The interior as a crater

Since only football will be played in the new Munich Stadium, the seating is directly adjacent to the pitch and each of the three tiers is as close as possible to the playing field. The incline increasing from bottom to top creates additional special density. As in Shakespeare’s Globe Theatre, spectators sit right next to where the action takes place.