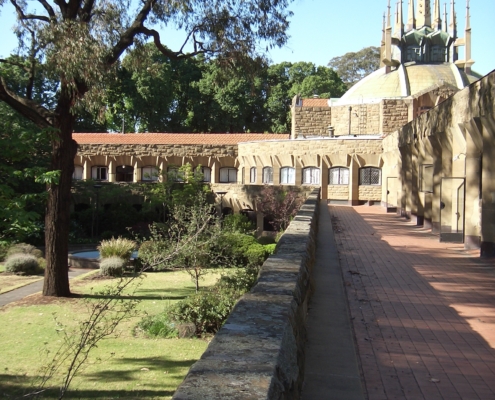 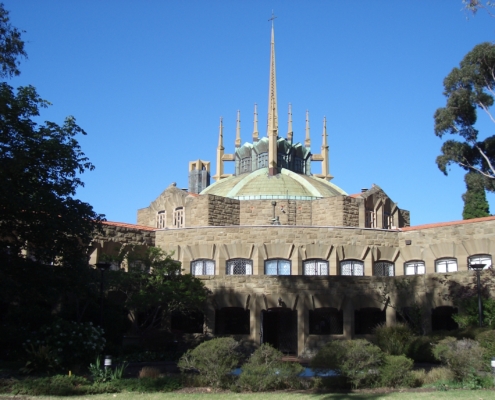 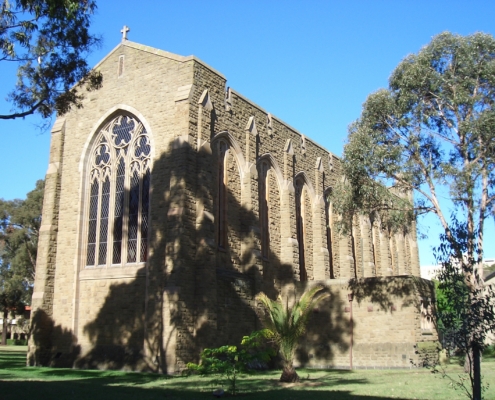 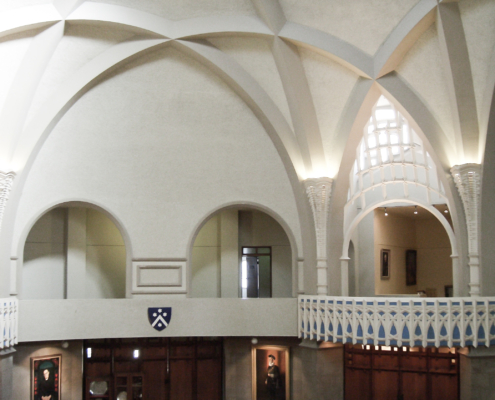 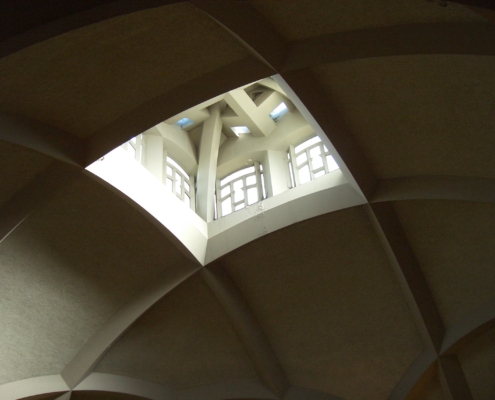 "The L-shape of Walter Burley Griffin’s initial structure, completed in 1918, was a remarkably simple plan pattern compared to the plans of the other three colleges affiliated with the University of Melbourne and seen in the right-hand half of the campus plan of 1919.

Although there have been shifts over the decades in the location of some College functions within the initial structure, the fabric of the Griffins’ original building has remained largely intact. The basic construction was reinforced concrete with a veneer of stonework outside and hard smooth plaster wall surfaces inside. The exterior and interior finish to the reinforced concrete dome was originally exposed cement render. During the 1930s, the dome outside was sheathed in copper sheet. Expansion of residential facilities on other parts of the site has been required during the last 85 years. For example, additions of student rooms in two extra blocks, to the west and south of the site, occurred during the 1950s and 1960s. During the 1970s, a women’s College, the new St Mary’s Hall, was constructed on the site to the south.

The architectural qualities that Griffin envisaged for the Newman College initial structure have endured. The straight planes of the Student Residential Wings connect with the amply rounded form of the Rotunda like an escarpment that collided with a soft hillock in Nature’s geological history. The Initial Structure has a battered base that looks like the sloping edge of a platform upon which the whole building rests. The visual theme of a battered base, a two-story band of windows, and the parapet strip, exaggerates the horizontal form of the building. The force of gravity can be read in the massive stonework relieved by the sharp-edged verticals of the smooth angled piers. The splayed window surrounds have faceted keystones crystalline in the light.

The dome appears to float above a fortress of rusticated walls, as if to protect aspirations within from the profane world outside. The dome in another light appears to be a smooth rounded mound capped with four chiseled rock-faces and a crystal mast with an attendant growth of budding young stems. The embellishment of the dome portends that lofty signs are in sight. Christ and his Twelve Disciples are manifest in the central flèche and the four groups of three pinnacles. The four cardinal directions of the Earth are marked by the geometric alignment of the four sides of the lantern with the pinnacles on the diagonals between. The quest for knowledge and truth enjoyed in companionship by the College members assembled below in the Dining Hall can reach out to the world through this iconography.

Information provided in part by: The University of Melbourne