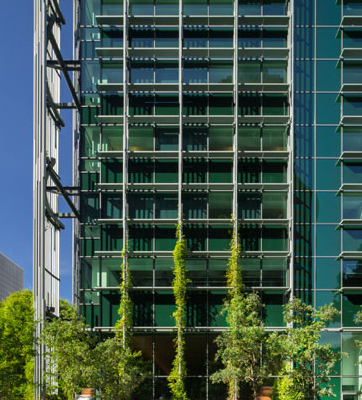 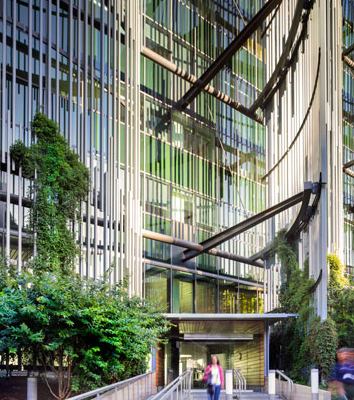 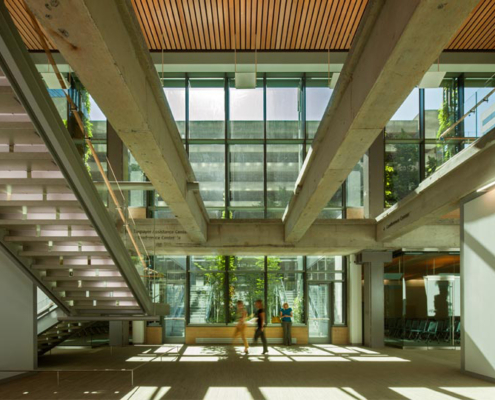 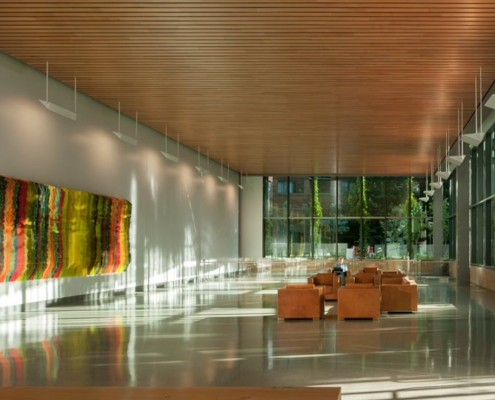 The Edith Green-Wendell Wyatt (EGWW) Federal Building is an existing 18-story, 512,474 sf office tower located in downtown Portland. Completed in 1974, the building’s MEP systems were worn out and out-dated. In addition to upgrading building systems, updating the work environment and improving accessibility, the design also needed to meet the stringent energy and water conservation requirements of recent executive orders. With a unique facade of “reeds” that support plant growth and provide a native ecosystem, shades tuned for each facade to reduce solar gain, and a roof canopy that supports a180 kW photovoltaic array while collecting rainwater - the project pushed design boundaries. The strong connection between the landscape and the building, provides a unique setting for the re-birth of this urban building, with a tapestry of climbing vines, unique to each solar exposure, communicating GSA’s green commitment to the City. The primary design goal was to transform the existing building from an aging, energy hog to one of the premiere environmentally-friendly buildings in the nation. Starting with a High Performance Green Building (HPGB) Workshop that identified a variety of potential Energy Conservation Measures (ECM’s), the design team spent 3 months analyzing which measures brought the best value using physical, virtual, and energy models. After the team completed the analysis, the Design Excellence Architect began the process of translating the data into a synthesized aesthetic expression. The focus was to communicate the sustainability measures on both an emotional and physical level.

Additionally, the building renovation sets a precedent for how a mid-century high rise can be reused and adapted to new functions and requirements, another important green strategy. Recognizing this, the design deliberately reveals the history of the building, exposing the artifacts of EGWW’s original builders by juxtaposing the old steel and concrete with modern glass railings and smooth walls. With an energy savings of 60% compared to the existing building, EGWW is a model project for GSA nationwide, both as a premier federal office space and as an energy efficient renovation project. The resulting LEED Platinum project, is projected to exceed the requirements of the ARRA, and is on track to being one of the lowest energy use buildings in the US. "