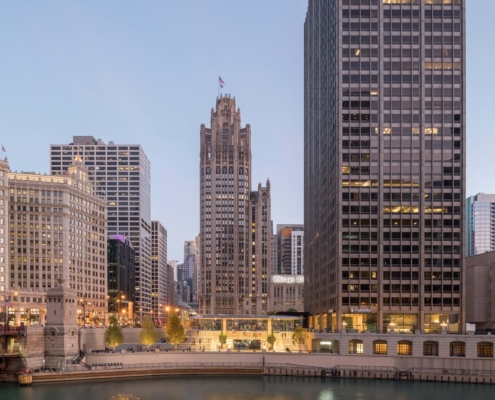 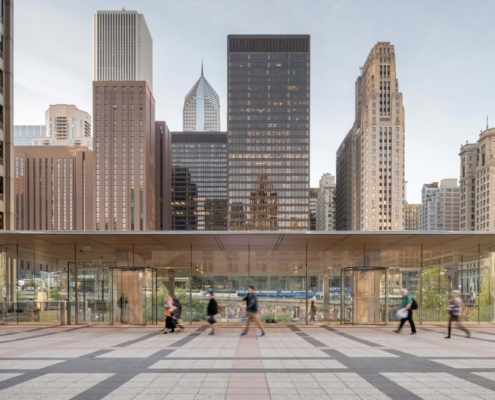 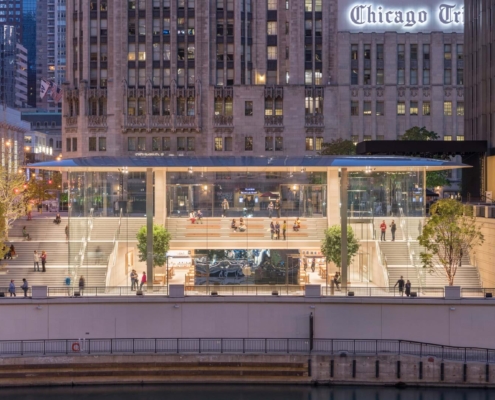 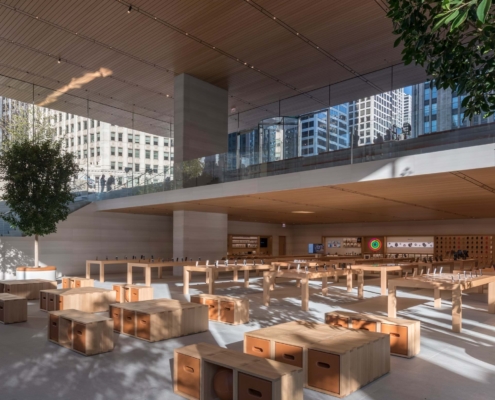 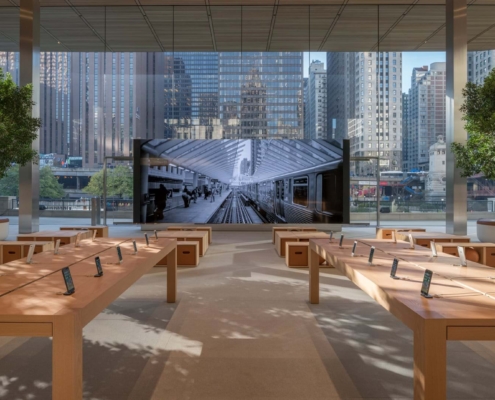 "Inspired by the pulse of Chicago’s artistic energy, Apple has created a new platform for performance in a city charged by music. Located at the intersection of the Chicago River and North Michigan Avenue’s ‘Magnificent Mile’, Apple Michigan Avenue cascades down from Pioneer Court to the river’s edge, creating new connections between the city and the river. The project reflects Apple’s commitment to the cities and communities it inhabits, and is the result of a close collaboration between the design team at Apple led by chief design officer, Sir Jonathan Ive and Angela Ahrendts, senior vice president of Retail and Online Stores and Foster + Partners. Pioneer Court is an urban plaza steeped in Chicago history. It is the spot where Point de Sable – the founding father of Chicago – first lived and worked. Apple Michigan Avenue sits atop a wide new public stair, created to lead down from the plaza to the river. The gentle descent of levels creates active spaces where people can connect, create, and experience the city and river together. The stairway transitions seamlessly between the outside and inside. It passes through the building’s walls – dematerialized to pure glass – and connects to the store’s buzzing center, sheltered by an impossibly thin carbon fiber roof, supported on slender stainless-steel columns. As the interior steps down to the river, it acts as a seating space around the Forum – the hub of Today at Apple and a live source of creativity, education and entertainment. Stefan Behling, Head of Studio, Foster + Partners said: “We fundamentally believe in great urban life, creating new gathering places, and connecting people in an analog way within an increasingly digital world. The design of Apple Michigan Avenue embodies this in its structure and materiality with a glass wall that dissolves into the background, revealing the only visible element of the building – its floating carbon fiber roof.”"

Reva and David Logan Center for the Arts Scroll to top