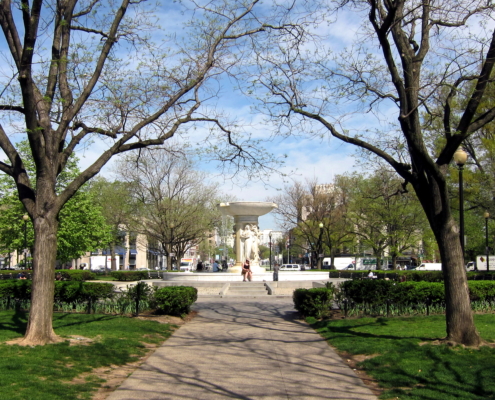 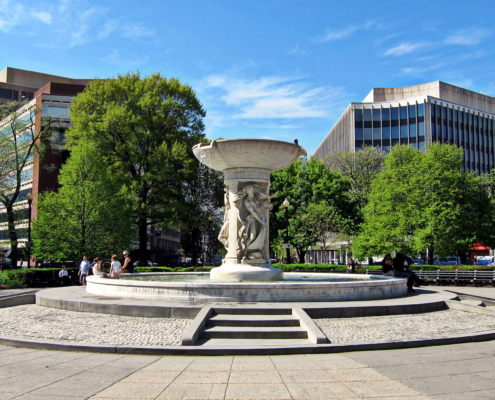 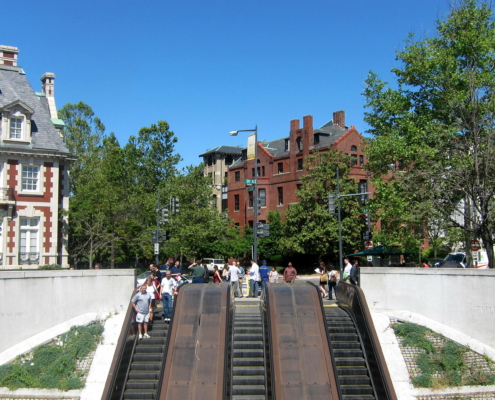 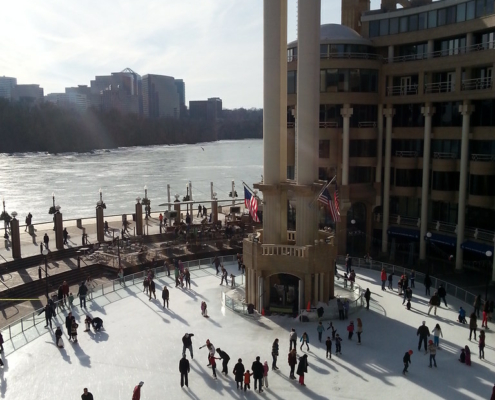 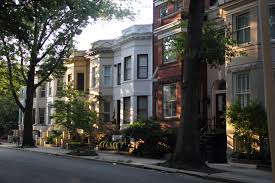 It was the Board of Public works under the leadership of Alexander Shepherd that spearheaded the way for the development of Dupont Circle. Nevada Senator William Morris Stewart led the "California Syndicate" which bought up tracts of undeveloped land. The style of the neighborhood was set when Stewart erected his mansion in the 1870s. By the late 1880s the Dupont neighborhood was an affluent and vibrant neighborhood. In 1871 the Corps of Engineers began construction of Dupont Circle itself which at the time was called Pacific Circle. In 1882 Congress authorized a memorial statue of Rear Admiral Samuel Francis duPont in recognition of his Civil War service. The bronze statue was erected in 1884. In 1921 the statue of Dupont was replaced by a double-tiered white marble fountain. It was designed by sculptor Daniel Chester French and architect Henry Bacon. Three classical figures, symbolizing the Sea, the Stars and the Wind are carved on the fountain's central shaft. The Dupont Circle Historic District is a primarily residential district extending generally in all directions from Dupont Circle. The area was developed in the last quarter of the 19th century and the early years of the 20th century. Two types of housing predominate in the historic district: palatial mansions and freestanding residences built in the styles popular between 1895 and 1910, and three-and-four-story rowhouses, many of which are variations on the Queen Anne and Richardsonian Romanesque Revival styles, built primarily before the turn of the century. The mansions line the broad, tree-lined diagonal avenues that intersect the circle and the rowhouses line the grid streets of the historic district. This juxtaposition of house types and street pattern gives the area a unique character. When the Dupont Circle area first became a fashionable residential neighborhood some of this community's wealthiest residents constructed houses there. The styles employed in designing these rowhouses which were built from the 1880s into the first decade of the 20th century, range from Queen Anne to Richardsonian Revival to Renaissance and Georgian Revival. Variations on Queen Anne and Richardsonian Romanesque were most prevalent in this area of D.C. Some of the rows were designed as a unit by a single architect while others were individually built and designed. The row on the south side of the 1700 block of Q Street, designed in 1889 by T.F. Schneider, is one of the most impressive Richardsonian rows in the area. The north side of the 2000 block of N Street is one of the finest Second Empire rows in the district. These houses were built between 1879 and 1881 by Christopher Thom. The 2000 block of Hillyer Place contains a variety of styles, especially Queen Anne and Richardsonian Romanesque. One of the most varied and architecturally intact blocks is the 1700 block of N Street which reflects the breadth of architectural talent in the area. A commercial corridor along Connecticut Avenue and P Street west of the circle developed in this district. The early commercial buildings are small in scale and do not detract from the district's character. In recent years, pressure for large-scale commercial office development on Connecticut Avenue has been intense. A number of new office buildings, some unsympathetic to the historic district line the northern and southern fringes of Connecticut Avenue.