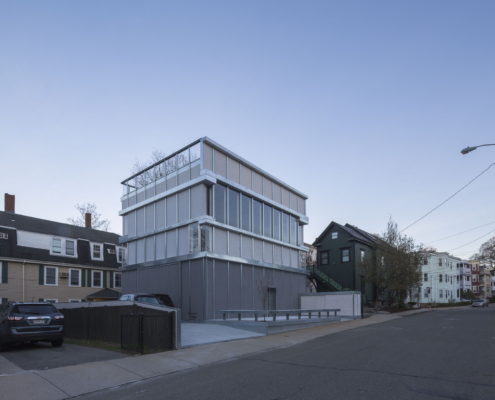 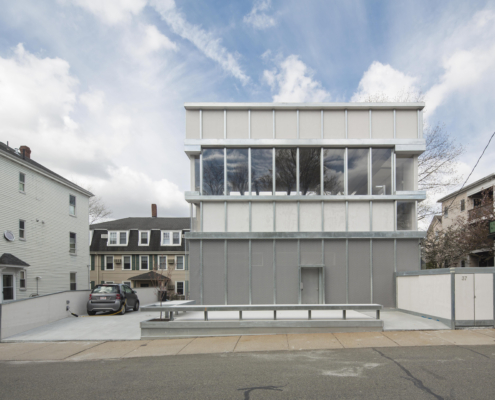 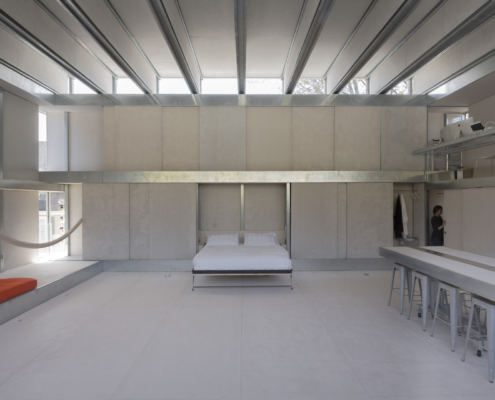 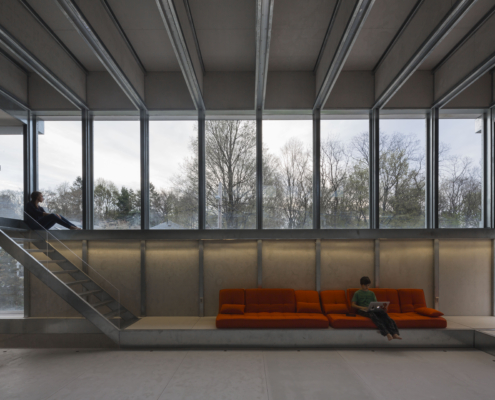 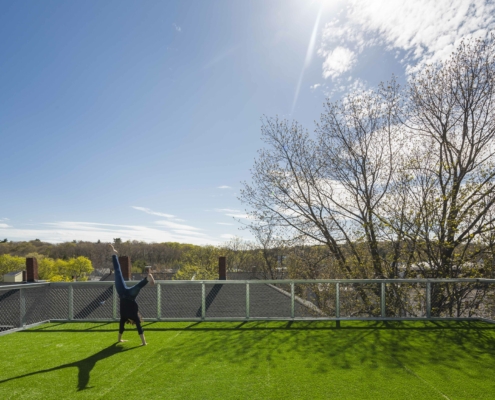 " In his first stop on the way home, Ulysses reaches the cave of the Cyclops, a fierce and strong builder who looked through one single point. And there he is locked up until he uses his ingenuity to escape and goes where the winds take him. Cyclopean House is built, using the vigor of the builder, and the ingenuity of the engineer, to start a journey from the place of its manufacture –Madrid- to the place where it can definitely lie -on top of an existing garage, the ugly duckling of the area, located in a calm residential neighborhood of Brookline. The one-story gloomy construction accommodates the parking, workshop and service spaces, following its basic structural logic, and is completed with the big room built on it by the assembly of the large prefabricated elements that rest after their long transatlantic voyage. This open-plan double-height living area includes the main domestic activities and enables the transformation of the residual building into a two-story residential unit, technologically and spatially adapted to its time and the life of its users. The new architecture concentrates structure and infrastructure in the perimeter: seven beams –of monumental scale- which specialize in one action each -cooking & bathing, storing, seating, dining, sleeping, working, projecting-. The rest of the plan is then cleared to be shared by different events succeeding in time and functions have the option to expand into the central space as needed deciding its temporary layout. The seven programmatic beams configure a thick enclosure that minimizes visual contact with the exterior on the three sides that adjoin neighbor houses and creates a big opening on the street side where the interior space can look at the trees in front and imagine itself in the midst of a park. Complementing this one eye, as beams assemble together embracing space, they lose their mass in the points of contact where flanges touch and the web recesses to provide additional light and ventilation to specific functions. Privacy and thermal insulation is thus guaranteed while maximizing light and view. To avoid overloading the preexisting structure or having to dig new foundations, ultra-light construction systems give form to the new elements: solid cores made of foam -98% air- reinforced by steel profiles and fire-proofed by a thin layer of cement & fibers. Dry joints and material lightness enable the different elements to be produced out of site –including finishes and fixtures- easily transported by ship and regular trucks and quickly placed together following a rhythmic sequence -carefully planned beforehand. Unlike the heavy, cold stone that prevented Ulysses from leaving the cave, Cyclopean House is light and warm, light due its lack of mass, and due to its air coat. It sits and watches without being seen, interlacing its elements after the trip."