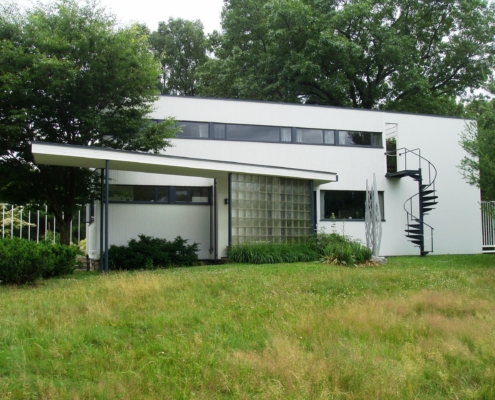 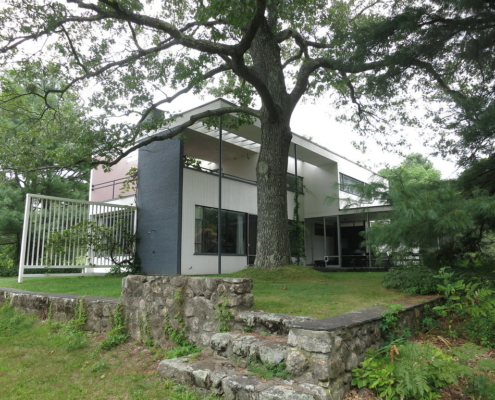 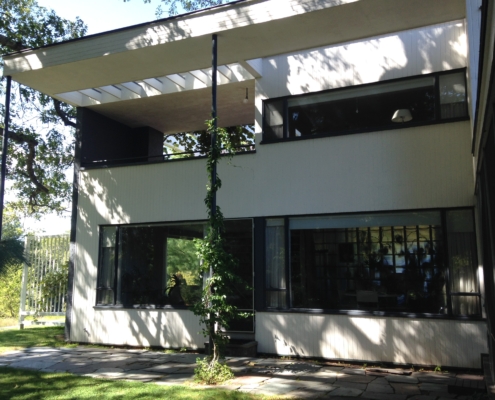 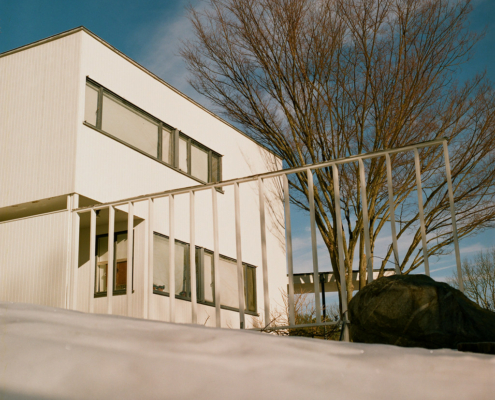 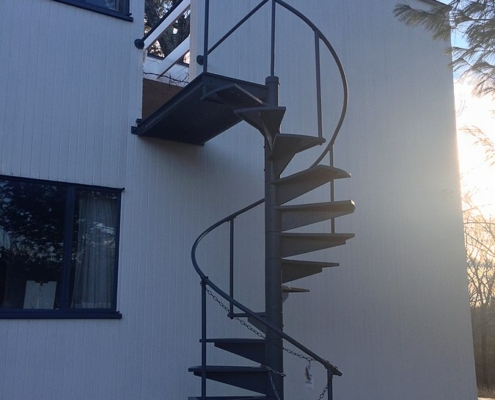 The Gropius House was the residence of Walter Gropius (founder of the Bauhaus school of architecture) and his family during his tenure at Harvard University during the mid 1900s. Completed in 1938, the Gropius House was his first commissioned project in the United States. Located in Lincoln, Massachusetts the house is a hybrid of traditional New England aesthetic and the modernist teachings of the Bauhaus. Located approximately one hour outside of Boston, Massachusetts and Harvard’s campus, Gropius selected a site in the town of Lincoln to accommodate the interests of his daughter’s education. The site for the house is set adjacent to the main road that cuts through the town. It sits among fields, forests of trees, and farmhouses. In Gropius’ mind keeping with the vernacular of the surrounding New England farmhouse aesthetic was of primary concern, while also introducing modern, mass-produced, pre-fabricated elements into the design. The Gropius House is a fairly modest building that maintains the scale and material identity of the surrounding area. The facade of the house combines common brick and local clapboard with manufactured ribbon windows and glass block, evoking a sense of stability and balance between old and new, traditional and modern, New England and European. While maintaining a connection with tradition, Gropius imposed a modernist aesthetic on the local materials by painting the house stark white. This color, combined with the tinted ribbon windows and glass block, projects the appearance of a slightly-Corbusian, foreign object placed in the landscape. In the interior, Gropius did not consider the New England architectural vernacular. The interior is a mix of fabricated pieces from the Bauhaus and furniture by Marcel Breuer. In accordance with concurrent trends in Europe, the house employs an open spatial organization filtering light throughout the house with large windows. Gropius used a minimalist color palette insidel--black, white, pale greys, and earth tones with only faint splashes of red. At the time of its completion, the Gropius House created a stir among the architectural community and the New England area. The house was the first sign of the International Style appearing in America’s residential milieu, an assessment that Gropius found unnerving: “As to my practice, when I built my first house in the U.S.A. - which was my own - I made it a point to absorb into my own conception those features of the New England architectural tradition that I found still alive and adequate. This fusion of the regional spirit with a contemporary approach to design produced a house that I would never have built in Europe with its entirely different climatic, technical and psychological background.” The Gropius House was home to Walter Gropius and his family until his death in 1969, when it was officially transferred back to the owner of the land who was so enthralled by Gropius and his work that she opened her land to other architects to create similar structures. In 2000, the house became a National Landmark, which is a testament to the influence of Walter Gropius’ life work.