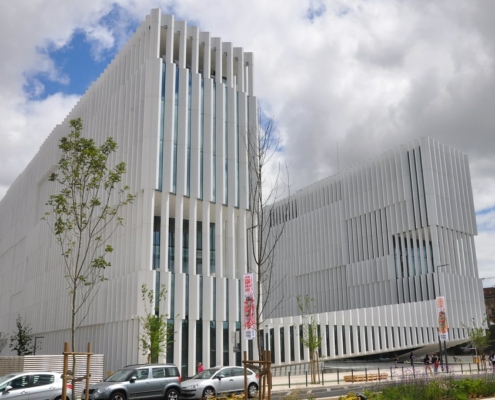 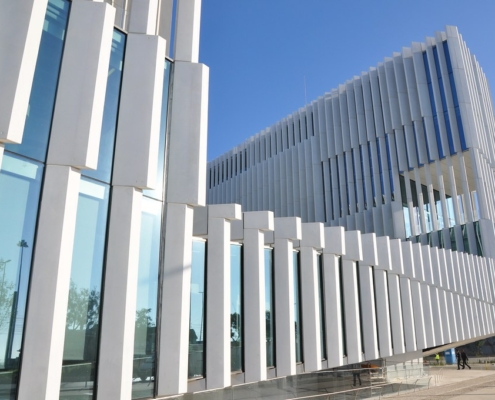 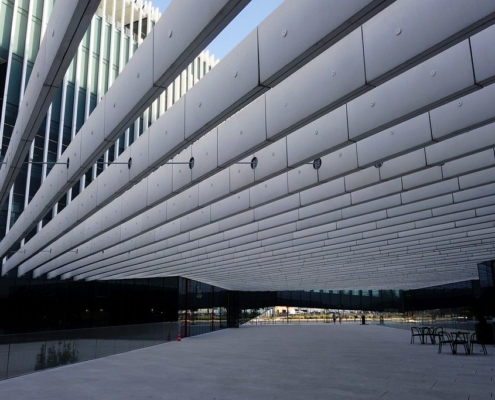 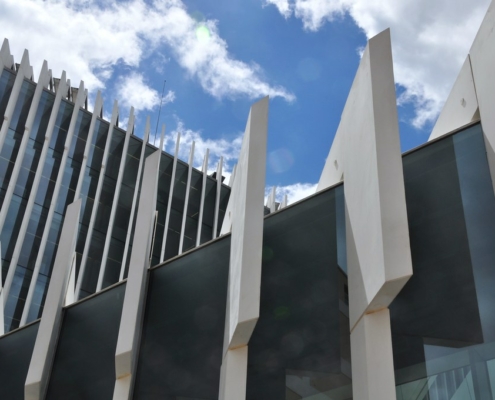 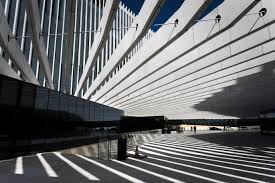 The structure is etched with vertical elements which give modulation, structure, protection from the sun, and resolve the whole building. Variable profiles are subtly modeled within a smooth and continuous design, where plans delicately suggest themselves. An ever-changing facade varies with the light, half-light, or shadow, and changes from more opaque and mysterious, to more transparent, revealing the light pulsating within it. The gesture resolves the project, protecting working space, creating courtyards in section, and public functions within the horizontal square. Mateus explains the reasoning behind the project as if it could not have been done any other way. First, to avoid blocking the connection to the city on the north and the river on the south, he and Francisco placed all the large programmatic elements underground, including parking, the entrance lobby, and an auditorium. The workspaces are grouped in two slender eight-story towers. To emphasize the sense of flow, transparency, and continuity at ground level, the team created a public square shaded by a lattice-like structure linking the east and west towers. Pedestrian bridges gently lift above the square to connect the towers on the site’s southern and northern edges. Finally, the desire for open, flexible offices, with light and views for EDP’s corporate and administrative departments, led the architects to create a glass facade supported by a complex structure of steel columns coated in white prefabricated GRC elements. These vertical finlike forms both shade the interior and lend the building its distinctive, ever-changing appearance. The architectural design shows an apparently effortless rationality underpinning the building’s steel and concrete structure. Yet the rigorous calculations were as much cultural as mathematical. In order to reaffirm EDP’s profile as a supporter of the arts, the company invited several internationally renowned architects and designers to execute the interiors.

Champalimaud Centre for the Unknown Scroll to top