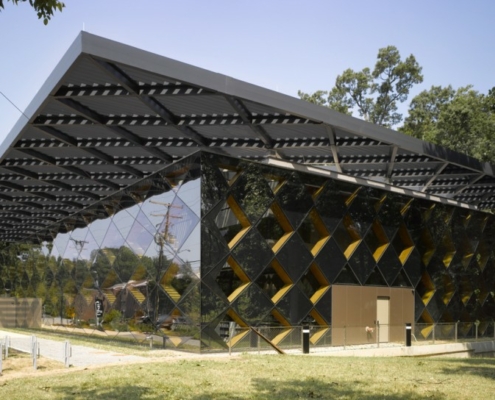 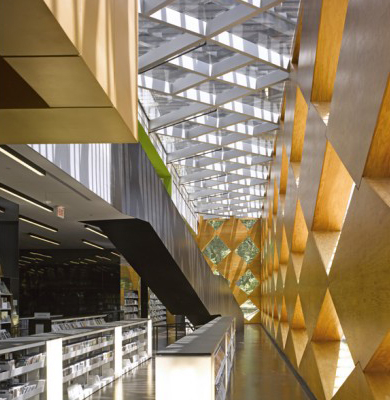 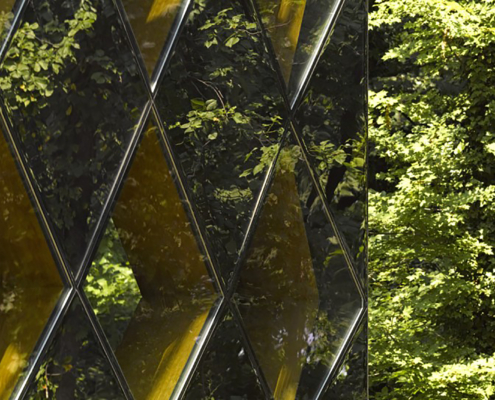 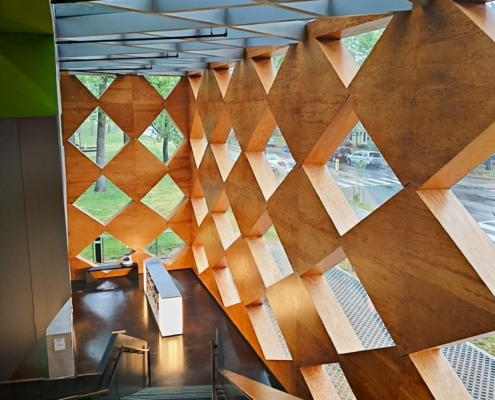 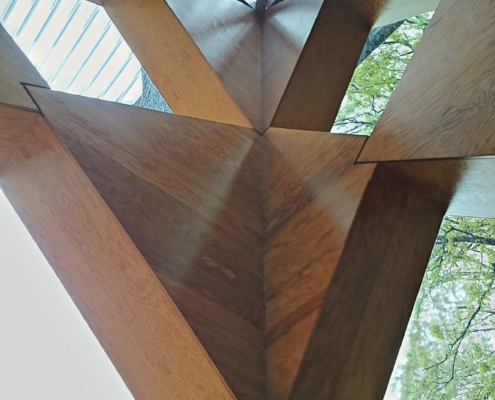 The Francis A. Gregory Neighborhood Library was designed by Adjaye Associates who won an open competition to design two new neighbourhood libraries for the District of Columbia. The brief called for the new buildings to be flexible, accessible, welcoming and inviting. Resonating with the Idea Stores in London’s Tower Hamlets, the libraries challenge the traditional closed typology, introducing a social element that establishes a strong urban and cultural remit. / The sketch-like quality of the 22,500 square foot Francis Gregory Library suggests a woodland folly – a building that is a pavilion within Fort Davis Park. Views of the park are framed from within, while the exterior of the building both reflects and complements the dense composition of trees and the striking natural environment. / Viewed from the street, the building appears to flicker with the changing light, providing a lens through which to see into the park. Its two-stories provides space for three major library services: adults, teenagers and children. There is also a public meeting room and conference rooms. / Achieving Leadership in Energy and Environmental Design (LEED) Silver certification, the design strategy is highly sustainable, taking advantage of the natural vegetation, maximizing the winter sun exposure and controlling the summer sun with a large canopy over the pavilion. The canopy welcomes the public inside, providing an effective transitional space from the street. The structural system is articulated in the reflective geometric façade that supports the curtain wall and roof, while the network of quadrilateral openings continue inside and frame the views of the park. / A number of windows are deep set to enable seating within the aperture, itself, encouraging visitors toward the perimeter of the building to reflect and enjoy the views. The material palette inside the building is largely timber – again, resonating with the woodland setting. / The National Museum of African American History and Culture Adjaye Architects was design competition won by Adjaye Architects in 2009. Located on Constitution Avenue, adjacent to the National Museum of American History and the Washington Monument, the museum will house exhibit galleries, administrative spaces, theatre space and collections storage space for the NMAAHC. As lead designer for the Freelon Adjaye Bond/SmithGroup (FAB) team, David Adjaye’s approach was to establish both a meaningful relationship to this unique site as well as a strong conceptual resonance with America’s deep and longstanding African heritage. The design rests on three cornerstones: the “corona” shape and form of the building; the extension of the building out into the landscape – the porch; and the bronze filigree envelope.