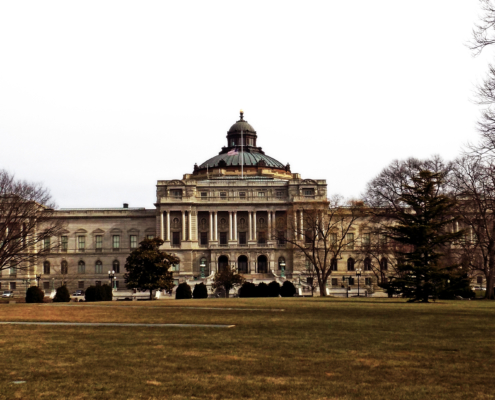 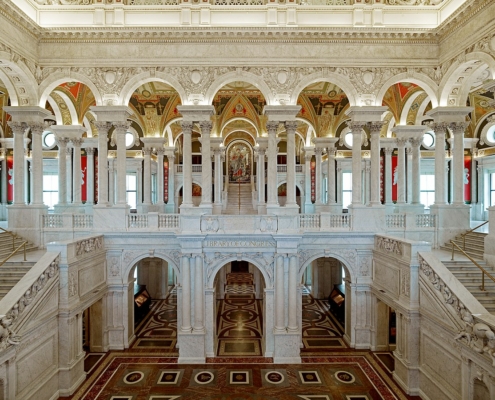 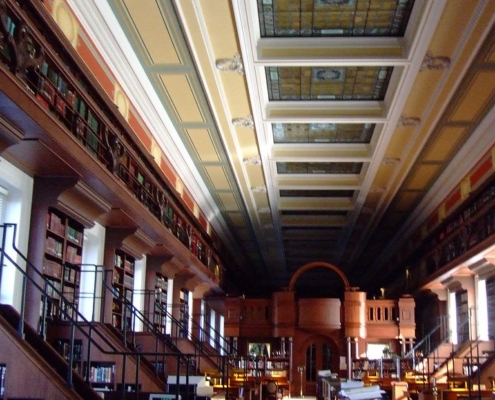 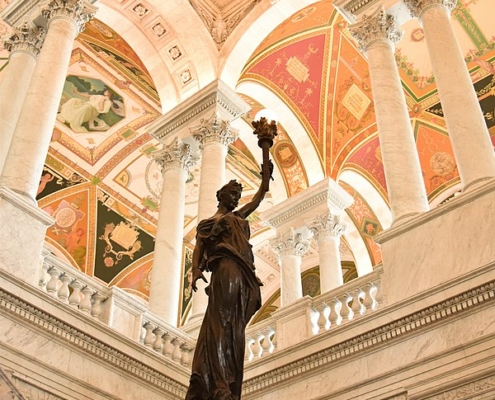 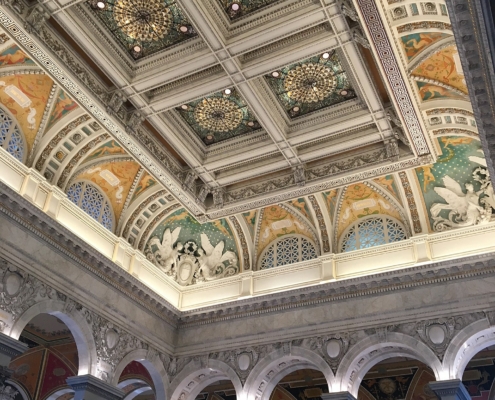 The current Library of Congress is housed in the Thomas Jefferson Building facing the Capitol Building. The library originally began in 1800 with a small appropriation to buy reference books. Unlike Philadelphia or New York where Congress had previously met, there were no libraries in the infant city of Washington so one was created out of necessity. To replenish the collection that was destroyed by the British during the War of 1812, Congress purchased Thomas Jefferson's 6,487 volume library. From that time the congressional library has steadily grown into what is today the largest in the world. Until 1897, the Library of Congress was housed in the U.S Capitol's west center building. Despite enlargements and remodeling, there was never enough space to shelve the collections properly and it was decided in 1886 to move the library into its own building. The grand design of the library's Thomas Jefferson Building was based on the Paris Opera House and seemed to proclaim America's faith in learning and knowledge as vital strengths in upholding the republic. With its synthesis of architecture, art, decoration and ambition, the Library of Congress's Jefferson Building ranks among America's greatest achievements. When it opened November 1, 1897, writers could not find enough ways to herald the new day they saw for American civilization. The grandeur of the building, its size and scope, the noble artwork and fascinating sculpture left many Americans breathless. Many saw the new building as the fulfillment of American intellectual promise and the perfection of American art. One said that it was "likely to long remain unrivaled in this or any other country," while another opined, "Not until I stand before the judgment seat of God do I ever expect to see this building transcended." In the late 19th century the architectural style of the Jefferson Building was said to be "Italian Renaissance." Today, it is recognized as a premier example of the Beaux Arts style, which is theatrical, heavily ornamented and kinetic. It is a style perfectly suited to a young, wealthy, and imperialistic nation in its Gilded Age. The materials — marble (15 varieties), granite, bronze, gold, mahogany — were expensive but would last a thousand years. In plan the Jefferson Building is a hollow rectangle with a rotunda, bookstacks and four courtyards occupying the core. Corner and central pavilions are connected by hyphens (called "curtains") and create five-part compositions on the west and east fronts. The principal front faces the Capitol Building, rising four stories above grade with a low dome covering the central reading room. A monumental split stair featuring the Neptune Fountain rises in multiple flights to the main entrance, with three pairs of sculpted bronze doors. The granite exterior is heavily rusticated and vermiculated at the lowest level but grows finer and smoother as the walls rise. Paired Corinthian columns were employed at the central portico, which also has portrait busts of famous writers framed by circular windows. At the building's pinnacle the "Flame of Knowledge" is gold leafed, as was the copper dome until the 1930s.