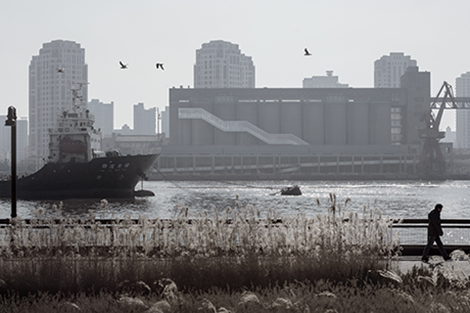 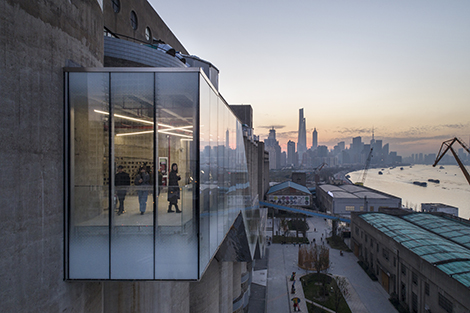 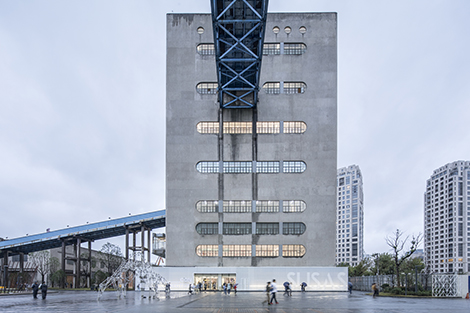 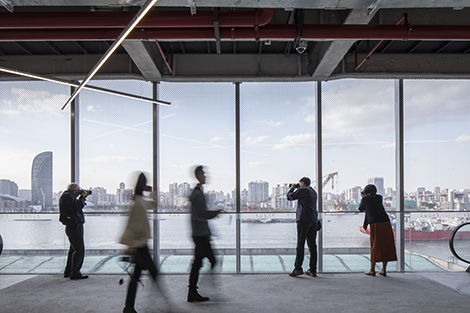 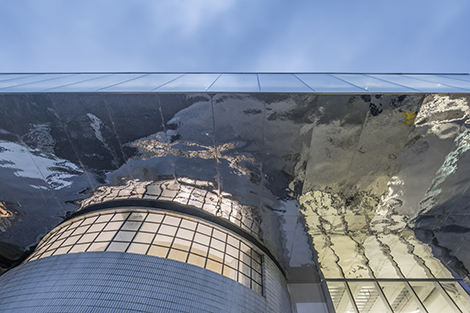 The 80,000-ton silo warehouse is the most powerful industrial heritage on Minsheng Wharf. Although having existed for only 22 years, it possesses great conservation value in its extinct architectural typology. According to classification method of Alois Riegl - the Austrian art historian, the silo is something of "unintentional monument (Ungewollte Denkmal)." The previous productive building, while its function in production fading away in the process of urban renewal, has stood as urban relic with the skeleton. The labor once happened in the space has no longer been the focus, but the unexpected wild force in urban context, brought about by the instrumental rationality reflected in the construction logics of industrial production, that stuns.

There are always certain conflicts between the concept of "renewal" and the conservation principle of maintaining "originality". In effect, the originality is irretraceable without original time and social background. The renovation and conservation of industrial heritage should be based on reserving and continuing its historic value and cultural meanings, and be given new connotations in new era.

The "Adaptive Reuse" of historic buildings proposed by ICOMOS' The Burra Charter has received greater attention these days and has been promoted in industrial heritage conservation projects. The key in "adaptive reuse" is to "identify a use or combination of uses or constraints on uses that retain the cultural significance of the place. New use of a place should involve minimal change to significant fabric and use…" The "adaptive reuse" defined in the Burra Charter, for its objective of adjusting a place to accommodate new program that does not impair the cultural meaning, is encouraged. "Identification of appropriate use" should be an important prerequisite for transformations of industrial buildings.

The 80,000-ton silo warehouse, serving as the main exhibition space for 2017 SUSAS, is an active attempt of spatial reuse with the guidance of "adaptive reuse" principle. Public cultural space, for art exhibitions mainly, is a suitable use identified for the silo that accords with its relatively closed spatial image.

The art season this time mainly uses the ground and top floors of the silos. With the height of 48 meters, a nice flow of circulation must be organized so as to integrate these two spaces. The strongest move there is a series of hanging escalators that introduces the people from three different levels directly to the top exhibition hall. Besides the exhibitions, visitors could also enjoy the spectacular views of the north Huangpu River and the entire Minsheng Wharf. The silos per se almost left untouched; thus, a juxtaposition of the new energies instilled and the original façade could be sensed. Such a move cuts straight into the major conflict faced with silo transformation: how to acquire certain openness when enclosed warehouse is made a public cultural space, and how to establish new senses of time and site? These hanging-escalators undoubtedly resituate the 80,000-ton silos; by introducing the view of Huangpu River, its waterfront position is highlighted and thus the architectural publicness emphasized. The new time is inscribed into the old time.

For the bottom plate of the hanging escalator, we collaborated with the artist Zhan Wang to create décor of his signature rugged texture out of reflective stainless steel. It reflects the surrounding context and, in a manner, makes the huge hanging volume lighter.

In the future, after the grain carrier connecting the riverside and the third floor of silo warehouse gets transformed into automatic pedestrian ramp, a continuous public space will be formed, from waterfront to the top of silo warehouse, as an important bond of East Bund waterfront connection and Minsheng Wharf urban renewal project, and hence new public character be built up.