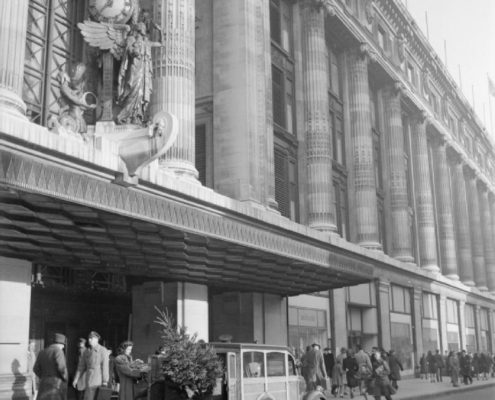 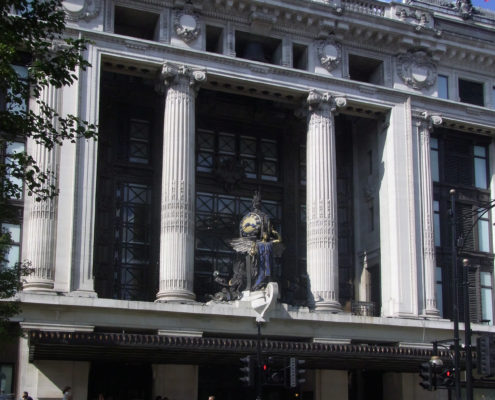 The building was designed by American architect Daniel Burnham, who was respected for his department store designs. He created Marshall Field's, Chicago, Filene's in Boston, Wanamaker's in Philadelphia, and Gimbels and Wanamaker's in New York City. The building was an early example in the UK of the use of a steel frame, five stories high with three basement levels and a roof terrace, originally laid out to accommodate 100 departments.

American-trained Swedish structural engineer Sven Bylander was engaged to design the steel frame structure. As the building was one of the early examples of steel frame in the UK, Bylander had to first agree appropriate building regulations with the London County Council, requiring amendments to the London Building Act 1844. Using as a basis the regulations which covered the similarly-designed London docklands warehouses, Bylander then agreed changes which enabled greater spans within lesser beam dimensions due to the use of steel over stone.Bylander designed the entire supporting structure which was approved by the LCC in 1907, with a steel frame based on blue brick pile foundations, supporting a steel frame which holds all of the internal walls and the concrete floors.Bylander designed in additional supported internal walls, as LCC would not approve store areas above 450,000 cubic foot (13,000 m3) due to the then approved fire safety regulations, many of which were removed 20 years later in light of new legislation. Bylander submitted a 13-page fully illustrated account of the design of the building to Concrete and Constructional Engineering, which was published in 1909. The work of Burnham and Bylander with LCC led to the passing of the LCC (General Powers) Act 1909, also called the Steel Frame Act, which gave the council the power to regulate the construction of reinforced concrete structures.

American architect Francis Swales, who trained at the École Nationale Supérieure des Beaux-Arts in Paris, was briefed to design the frontispiece. Aided by British architects R. Frank Atkinson and Thomas Smith Tait, the final design was highly influenced by John Burnet's 1904 extension to the British Museum. The steel supporting columns are hidden behind Ionic columns, to create a facade which present a visually uniform, classical, Beaux-Arts appearance. The distinctive polychrome sculpture above the Oxford Street entrance is the work of British sculptor Gilbert Bayes. The final frontage, through use of cast iron window frames to a maximum size of 19 feet 4 inches (5.89 m) by 12 feet 0 inches (3.66 m), means that both the Oxford Street and Duke Street frontages are made up of more glass than stone or iron works.