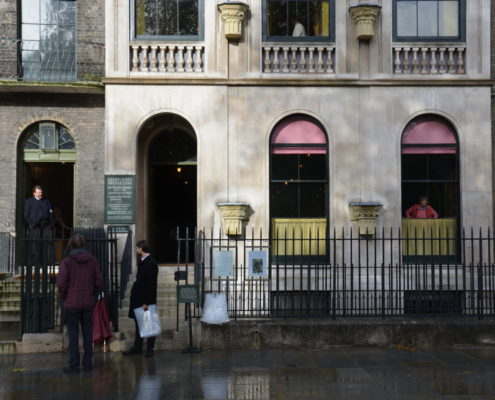 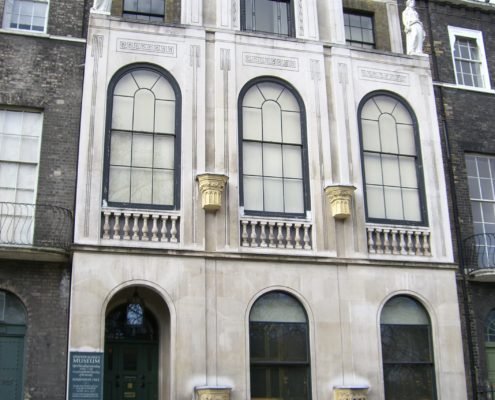 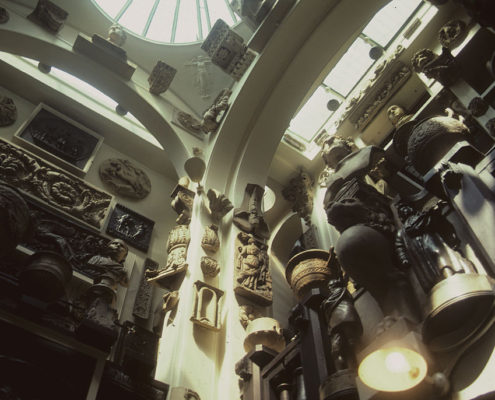 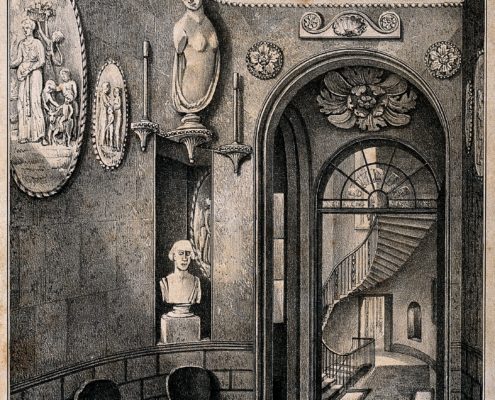 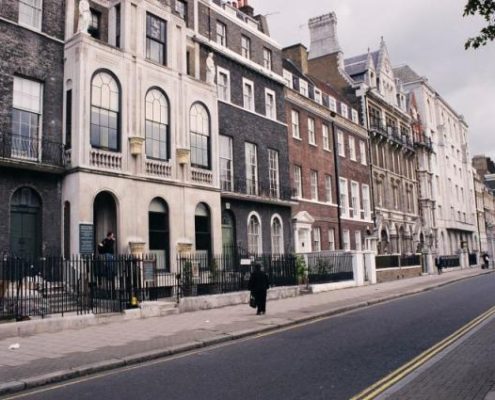 Sir John Soane (1753 – 1837) was one of the most inventive architects of his time. He built the Bank of England and Dulwich Picture Gallery, as well as his own extraordinary home by buying, demolishing and rebuilding three houses in Lincoln’s Inn Fields.

First, in 1792, he bought number 12 – pleased, perhaps, with its proximity to the Royal Academy, then at Somerset House, and the coaching inns on High Holborn. This was to be his home, office, and a space for his collections.

He created a distinctive façade in white Norfolk brick – a material which would have stood out on the street. And at the back of the house, he built a two-storey architectural office.

Then in 1807, Soane bought number 13 in order to acquire its stable block. He rebuilt the stables into a new office and museum space, which he filled with plaster casts and Roman marbles.

Soane wanted this space to be educational. In 1809, he toyed with a big idea: turning all of numbers 12 and 13 into a museum for architectural models, casts and drawings –organised into rational categories. He announced this idea to his students at the Royal Academy. However, this ambitious plan was impractical and was soon abandoned.

Soane continued to acquire objects and display them, but instead of categorising objects, he decided to show his collection in creative, eclectic ways instead.

In 1812, Soane’s unusual collection had taken over the space once occupied by the stables at the back of number 13. He needed more room, so he acquired the rest of the house and moved in. He rebuilt the front part, connecting it to the back, giving him plenty of new space to display his collection.

Soane now opened up the house to his students, hoping to aid their studies with his collection. Magazines began referring to the house as ‘an Academy of Architecture’.

Soane’s collection grew further. He ended up with some spectacular items – like the sarcophagus of the Egyptian king, Seti I. He was constantly arranging and rearranging these objects throughout his life, not just to incorporate new acquisitions, but to enhance their poetic qualities through inspiring juxtapositions. The organisation of the museum can seem chaotic. It is, in fact, quite purposeful – each room a work of art in its own right.

In 1824, Soane acquired and rebuilt number 14 Lincoln’s Inn Fields. The front part was a separate house which was rented out. The stables and courtyard at the back were demolished, replaced with an extension to number 13 which became the Picture Room.

In 1833, he negotiated an Act of Parliament: to preserve his house and collection, exactly as it would be at the time of his death – and to keep it open and free for inspiration and education.

Four years later, Soane died. A board of trustees took on the responsibility of upholding Soane’s wishes – as they continue to do so today.

And – as he intended – Soane is still inspiring us, nearly 180 years later.

We’verecently completed a £7 million project to restore previously unseen parts of the building, and to create a new shop, exhibition gallery, and flexible space for displays and events.

Today, this unique house attracts more than 100,000 visitors a year. We hope that they enter curious and leave inspired – as our Founder intended.

Information provided in part by: Soane.org