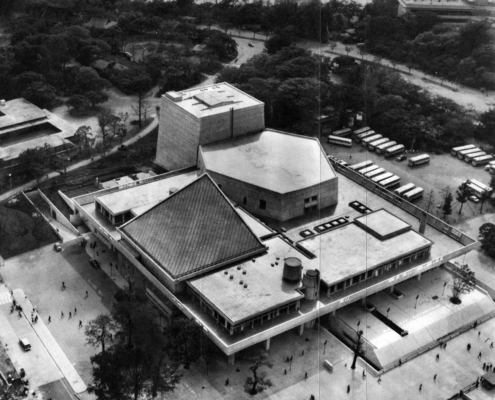 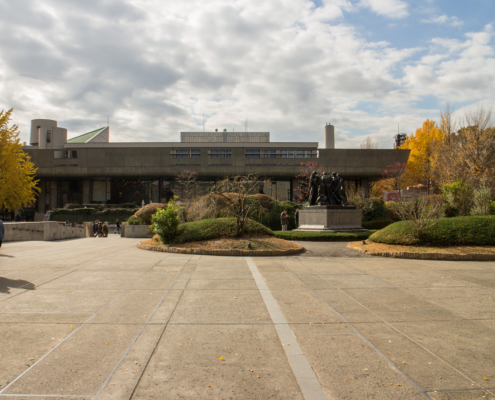 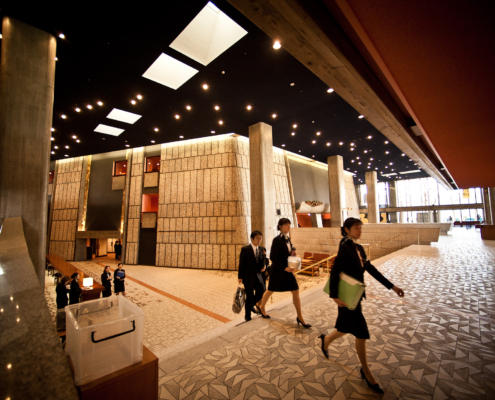 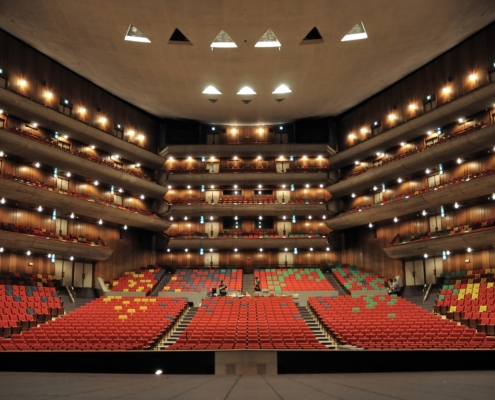 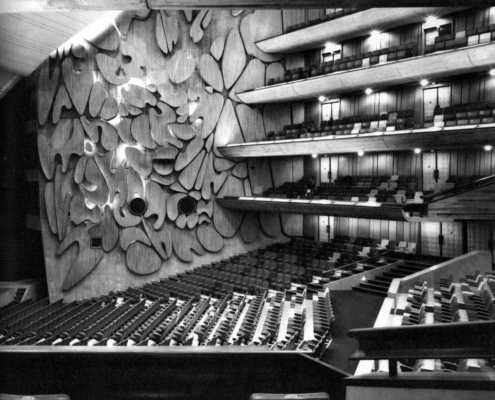 The Tokyo Metropolitan Festival Hall (Tokyo Bunka Kaikan), designed by Kunio Maekawa in 1957, opened in April 1961. The building was Japan’s first concert hall and was located in Tokyo’s Ueno Park. The heavy cornice and roof superstructures are reminiscent of Le Corbusier’s works, for whom Maekawa had previously worked. Directly adjacent to the hall stands the National Museum of Western Art, designed by Le Corbusier himself.

Ever since Bruno Taut and Frank Lloyd Wright-related the idea of “Japanese-ness” with Japanese architecture at the beginning of the 20th century many Japanese architects struggled with the question of how to create a building that on the one hand had a modern approach while also searching for a way to express the cultural identity and heritage of the country.

Maekawa, however, seemed to have always searched for a more pure modernist expressive form of architecture, rather than this search for a Japanese-ness in architecture. Maekawa mentioned that during the war, he was publicly attacked by his student Kenzo Tange questioning him of how architecture could express the new national Japanese identity. In true Aikido-style, Maekawa answered that the naval architecture with its swift lines stood for the new, imperial architecture. Maekawa’s non-political stance almost made him look like a traitor. Trained at Le Corbusier’s office in the late 1920s, Maekawa remained a true modernist architect throughout his career.

His influence on the dissemination of modern architecture in Japan can hardly be overestimated. The Tokyo Metropolitan Festival Hall, a concert and events hall at the east entrance to Ueno Park, became the most crucial stage in Tokyo for orchestras and international stars immediately after its inauguration in 1961. Later the NHK Hall (1972), the Suntory Hall (1986), the Orchard Hall (1990), the Geijutsu Theatre (1991), the Takemitsu Memorial Hall, and Sumida Triphony Hall (1997) started competing with the Tokyo Bunka Kaikan. However, the Latter is still known for its excellent acoustics.

The Tokyo Bunka Kaikan project used acoustical designs engineered by the NHK Technical Research Laboratories. The project pioneered and established in Japan the role of the architectural acoustical design professional as we know it today.

The Large auditorium has 2,300 seats; the smaller Recital Hall 649 seats, is for chamber music and conferences. There are eight rehearsal rooms, five seminar rooms, and a music library. The Tokyo Metropolitan Festival Hall is considered to be Maekawa’s best work. There are dramatic marble interiors but also references to vernacular architecture, especially the Minka (traditional Japanese farmhouse). The Tokyo Metropolitan Foundation for History and Culture operates the Tokyo Bunka Kaikan.

The Main Hall presents concerts and performances such as ballet and opera. Ryokichi Mukai created the cloud-shaped acoustic components. Scattered blue-green and yellow seats suggest a field of flowers, which also makes empty seats less noticeable. The movable features allow the stage to switch and to accommodate concerts or opera/ballet performances. The entire hall entrance is covered in salmon pink.

Information provided in part by: ArchEyes

The Gallery of Horyuji Treasures Scroll to top