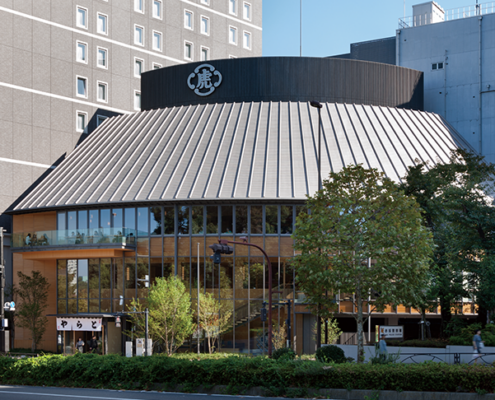 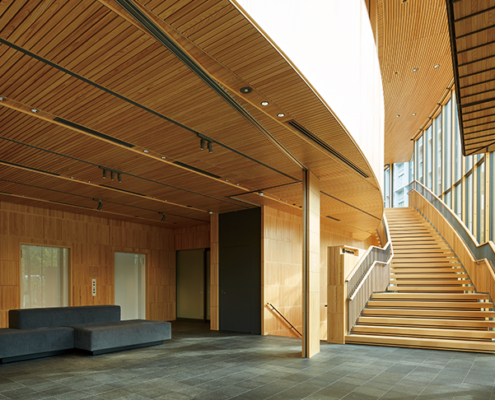 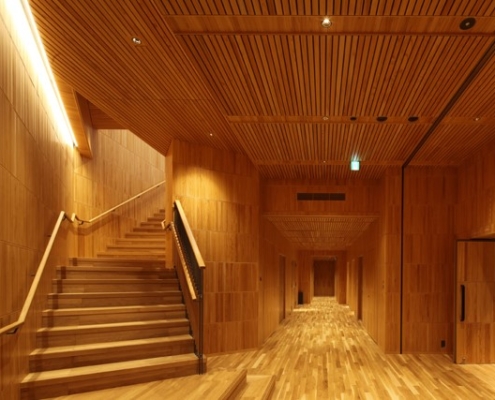 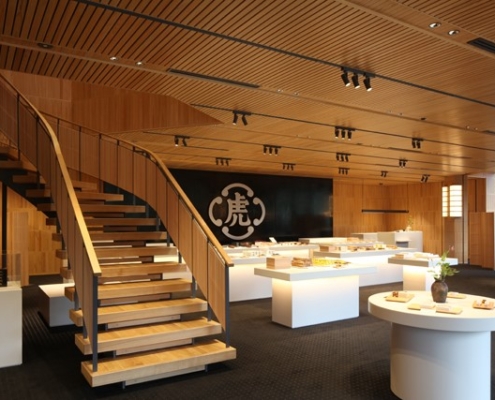 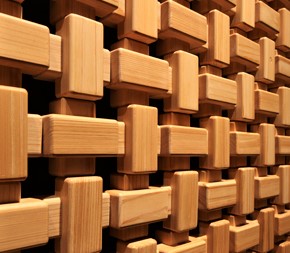 This is a flagship store in Akasaka for a long-established Japanese confectionery manufacturer that has a 500-year history and is known for its yokan (a bar of gelled sweet bean paste). This project was originally planned to renovate the mid-rise building constructed as a store and office building right after the Second World War into a new 10-story office building with a floor-area ratio of 668%; however, after the final design was completed, the young President, who had just taken office, ordered the designer to downsize and redesign it into a low-rise four-story building (with a floor-area ratio of 297%) in line with the business plan focused on the sale of confectionaries. The designer understood his intention and proposed a new design that would take advantage of the irregular form of the site located in a corner lot to construct a building with a fan-shaped glass façade and a cone-shaped glass-titanium roof to add a touch.

First, in order to reduce the work processes for the foundation and underground construction, the underground perimeter walls and foundations of the former office building were left intact, and a new underground structure was built inside the walls. A bracing jig was developed to install prefabricated concrete piles from a working platform 7.8 meters above ground, and a unit crane was arranged to lift a prefabricated and finished structure frame Despite these dynamic construction methods, the joints of the structure frame, which mainly have wood details, were delicately and accurately finished. We can easily imagine that the planning process, including the examination of these joints, required patient cooperation between the project's designer and contractor.

When we visited the site, the weather was good, and the terrace in the cafeteria was a pleasant place to relax and socialize. Infection control measures were put into practice, such as partitioning tables and providing natural ventilation, using window screens and wooden lattice screens. designed by the construction designer without compromising design values. It was meaningful to build this low-rise building, which has sophisticated traditional elements and nostalgic details and is located in the heart of Tokyo, to provide moments of relaxation in the 21st century. Inspired by the wishes of the project's owner, designer, and contractor, this work is considered deserving of the BCS Award.

Information provided in part by: The 61st BCS Award Committee (2020)