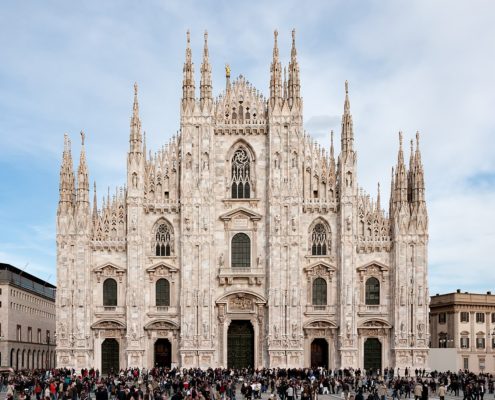 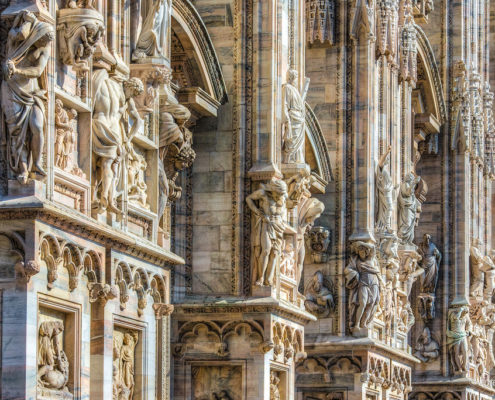 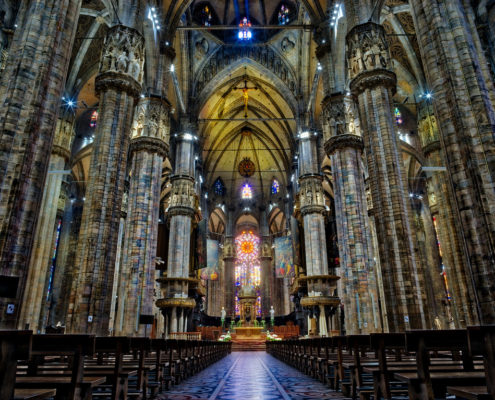 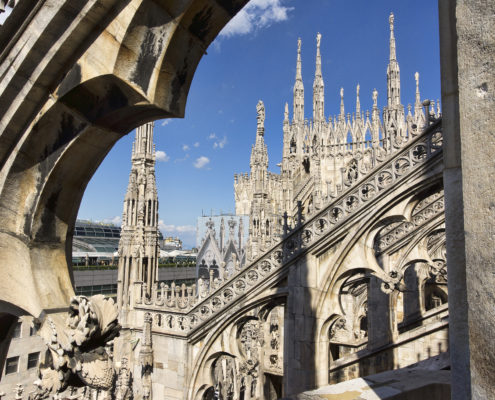 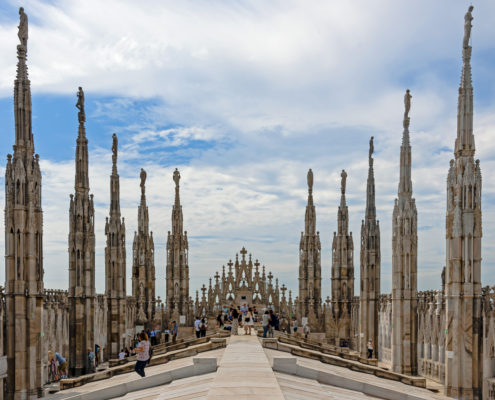 Construction of the new Cathedral Church of Milan began when Gothic cathedral architecture had already reached the height of its development, in 1386 and it was decided that the new church should be built on the site of the basilicas of Santa Maria Maggiore and Santa Tecla.

The design was intended to comply with the elements of Lombard Gothic style, a more formal than substantial transcription of Lombard Romanesque style, from which it inherited the building experience, the structural decisions and the traditional material, brickwork.

Gian Galeazzo Visconti's decision to use Candoglia marble in place of brickwork brought about an authentic revolution and forced the Fabbrica to seek engineers, architects, sculptors and stone-cutters who were expert in the Central European Gothic style in cathedral building sites all over Europe.

This was the origin of the unique Gothic style of the Duomo and it is for this reason too that it is not possible to trace the architect who worked on the delicate initial phase of design.

Practical decisions on site were always reached collectively with the engineers and experts working on the building, of whom there was always a considerable number and so the Duomo became a crossroads of people and cultures: a lively place for exchange of the most widely differing ideas, experiences and manual skills expressed by workers originating from the regions stretching from the Pyrenees to the Carpathians, thus making the Duomo the most European example of Gothic cathedrals.

When the flow of foreign manpower ended in the second decade of the 15th century, the building site of the Fabbrica continued with the criteria chosen, always remaining faithful to the “principle of conformity with the Gothic style”, at least this was so up to the arrival in Milan of Archbishop Carlo Borromeo (1565) and his architect Pellegrino Pellegrini (1567). The Council of Trent (1563) with its decrees, paved the way to the Counter Reformation or rather to the Catholic Reformation, in opposition to the Protestant Reformation.

Because of this, Carlo and Federico Borromeo took inspiration for their work on the Duomo from the architectural concepts and forms and the ecclesiastic furnishings of Papal Rome, giving the interior of the Duomo a new look: the grandiose architectural layout of the presbytery, the lateral altars, the crypt, the baptistery, the paving.

With the death of the two members of the Borromeo family and the gradual mitigation of their spiritual and cultural influence, it did not take long before the faithfulness of the Fabbrica to the Gothic style began to guide its decisions towards an architecture that was more static and less spiritual in its decorations, already influenced by the Neoclasical climate.

Information provided in part by: www.duomomilano.it