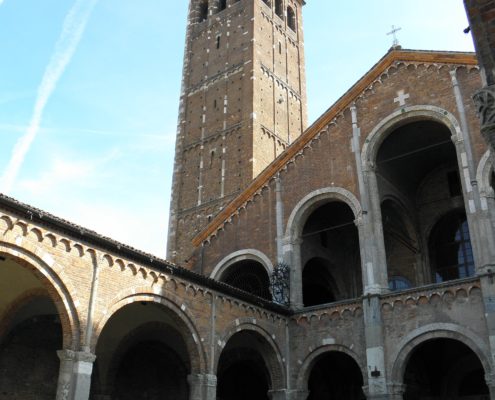 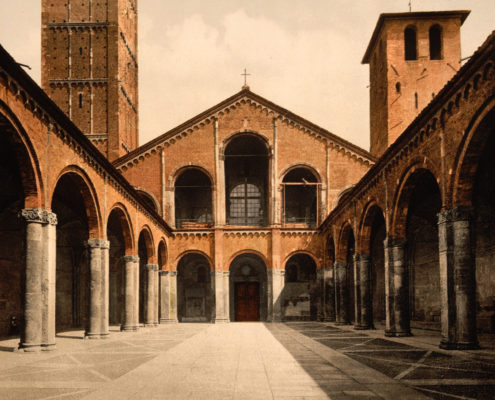 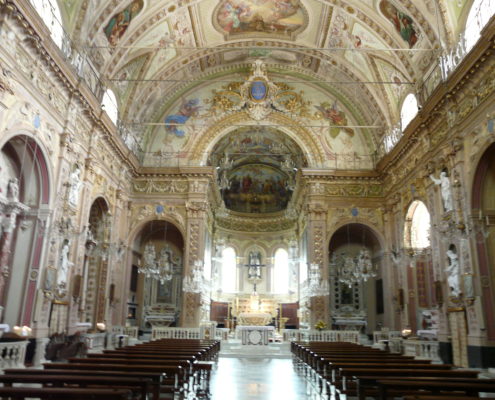 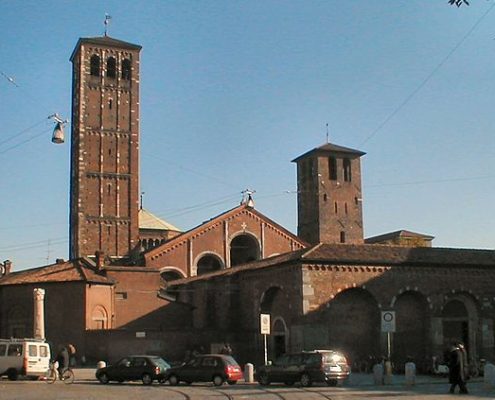 Together with the Duomo, the Basilica of Sant'Ambrogio is the cradle of history and spirituality in Milan and a treasure trove of sacred art. Great popular devotion revolves around the basilica that has always been a destination for pilgrims and visitors. The basilica’s entrance, the magnificent atrium consisting of four columns with capitals carved in relief, is a suitable introduction to the venerated atmosphere typical of ecclesiastical interiors. Upon entering visitors encounter a gabled facade opened by two superimposed loggias that are linked with the inside of the porch and framed at the top by two bell towers, the one on the left is the Torre dei Canonici (Canons’ Tower ,1141) and the right one is the Torre dei Monaci (Monks’ Tower 842.

Today, the Basilica, dedicated to the bishop of Milan, is a magnificent example of Romanesque architecture in Lombardy. Built between 379 and 386 it was originally called the "Basilica Martyrum" at the behest of Sant'Ambrogio. Constructed in the middle of a vast area (Hortus Philipphi) reserved for Christian burials and characterized by the presence of small cells in commemoration of the martyrs, the basilica - dedicated to the martyrs Gervasio and Protasio - was initially intended to accommodate the tomb of its founder.

The ancient building, of which only the original plan is known, has been extensively modified since the ninth century. The church has three naves, two lateral and one central; the ceiling consists of ribbed vaults and pillars that create momentum and harmony. Not much of the original basilica Martyrum remains in the basilica of Sant'Ambrogio but valuable evidence of the time can still be found.

Amongst these is the magnificent Sarcophagus of Stililcone, a great treasure that is traditionally attributed to the general Theodosius but was probably commissioned by a high-ranking person connected to the Milanese court.

Some of the decoration of the interior walls still remains, such as some polychrome marble inlays and a marble balustrade probably belonging to the railing of the altar of the holy martyrs, bearing a Christogram embellished with the letters alpha and omega. Incredibly, two precious carved wood panels from the entrance door commissioned by Ambrogio have also been preserved.

A stroll along the aisles becomes a fascinating journey through art and history to admire the numerous precious decorations on the vaults. However, the eye is inevitably drawn towards the fulcrum of the basilica: the ciborium, an elegant canopy decorated with Byzantine Lombard stucco supported by four Roman columns that enclose and preserve the masterpiece of Carolingian art (the only existing example preserved in precious metals): the Golden Altar.

History narrates that, probably in the ninth century, bishop Angilberto moved the bishops’ relics into a porphyry sarcophagus which was then covered by the precious altar, called ‘di Vuolvinio’ in homage to the author of the magnificent work. Scenes from the life of Christ are depicted on the front and the life of Sant'Ambrogio can be admired on the back.

However, even this transformation was not the final one. The subsequent construction of the crypt in the tenth century, with the elevation of the choir floor, brought other changes. Currently the remains of Gervasio, Protasio and Ambrogio are placed in a silver urn under the altar.