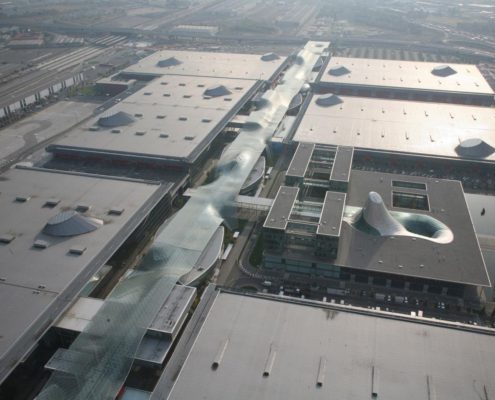 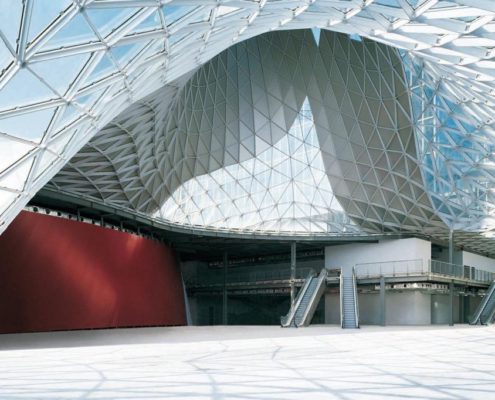 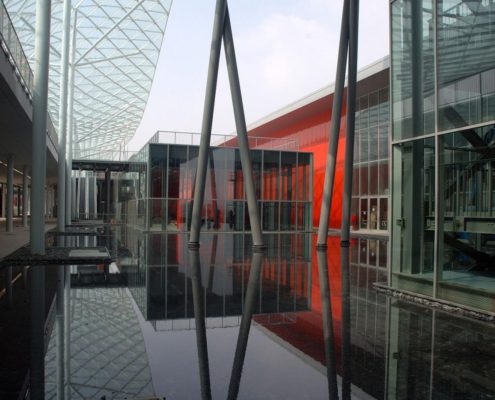 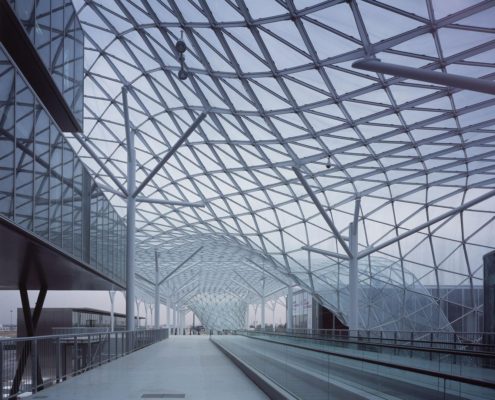 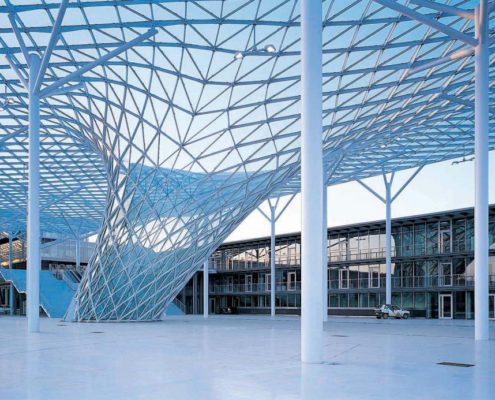 In an effort to attract large-scale world-class conventions and exhibitions, the city of Milan embarked on an ambitious plan to build a $700 million trade show complex. Massimiliano Fuksas was engaged to bring to life a new design that would house exhibition halls, auditoriums, conference rooms, restaurants and cafes, meeting halls, and office spaces for the Fiera administration. What would emerge from therecently reclaimed brownfields was a Fiera that covers 2.1 million square feet and stretches nearly a mile.

Massimiliano garnered inspiration from the intrinsic elements of the surrounding landscape. The concept was further refined through numerous iterations within the digital realm, which played a critical role in maintaining the continuity of the original sculptural sketch/model – and in the eventual fabrication of the fluid fabric-like canopy that runs the entire length of the Fiera.

Fuksas dealt with the expansiveness of the 8 separate structures by orienting them inwards towards the central spine covered with a glass canopy that functions akin to that of a central street. In order to demarcate the various functions of the buildings, the exhibition halls have orange facades facing towards the canopy, the restaurants and cafes that line the open air corridor feature curvilinear facades and stand on pillars, the meeting halls feature stainless steel cladding and hover at walkway height, and the office spaces are contained within glass boxes that line the walkway.

While the canopy itself is freestanding, it floats over portions of the roofs of the adjacent rectilinear buildings and dramatically swoops down to the ground level in parabolic vortex fashion, defying the traditional archetypal conception of a canopy. Running a length of 4265 feet, the flat portions utilize rhomboidal glazing panes, while the doubly curved sections utilize triangular panes to efficiently achieve the free-form shape. Structure consists of tree-like columns of circular profile HSS (with two inner branches accommodating roof drainage) that were prefabricated off site.

Perhaps one of the most dramatic points within the complex lies within the Service Center which houses the main entrance hall. Visual spectacle greets the pedestrian by means of the glazed canopy touching down to grade and immediately shooting up 121 feet into a conical mountain – referred to as the logo (Italian for symbol).

Constructed over a period of 27 months, the Milan Trade Fair is testament to the Italians resolve to host world-class cultural events. While astonishingly epic in scale, it does attempt to instill the intimacy of traditional Italian built environments through the covered central walkway – which blends the much more pedestrian friendly aspects of the Fiera into a scale easily experienced and understood.