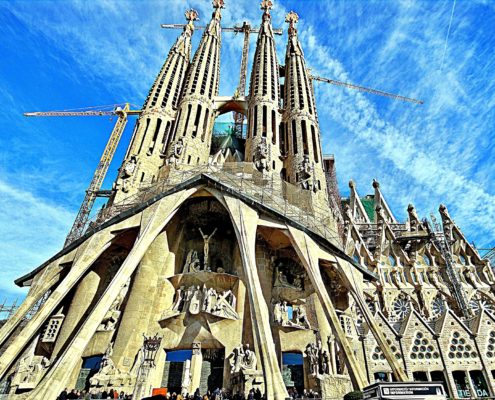 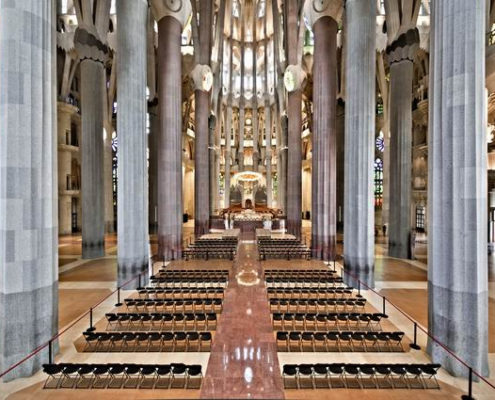 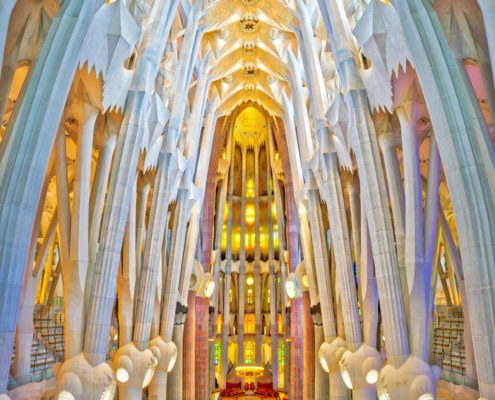 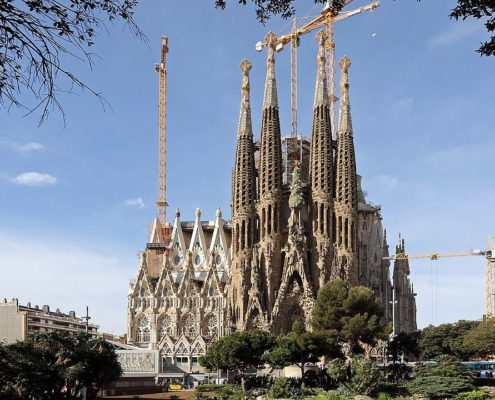 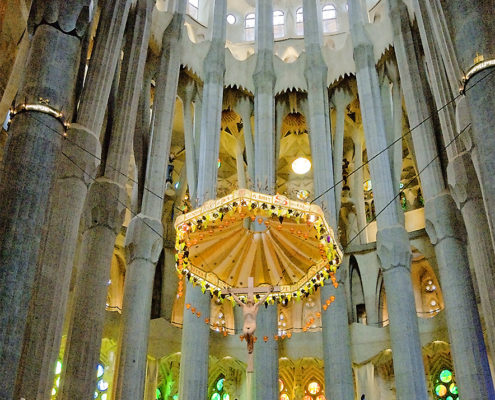 Gaudí’s conception of the Sagrada Familia was based on the traditions of Gothic and Byzantinecathedrals. His intention was to express Christian belief through the architecture and the beauty of the building and communicate the message of the Evangelists. He achieved a symbiosis between form and Christian iconography, with a personal architecture generated via new but thoroughly logical structures, forms and geometries inspired by nature, with light and colour also playing a central role.

The meaning of the Sagrada Familia is communicated through the form and expressivity of its architecture and the iconography of its sculpture.

The various architectural elements are imbued with hierarchically organised Christian symbolism. Thus, each of its 18 towers has a special significance. In the middle is the tower dedicated to Jesus Christ and around it are four towers representing the Gospels; the books containing the life and teachings of Jesus. The tower above the apse, crowned by a star, represents his mother the Virgin Mary, while the remaining 12 towers represent the 12 Apostles, witnesses to his words and deeds.

From wherever they are seen, once finished, these 18 towers will be an extraordinary sight and provide a sense of elevation to the central tower dedicated to Jesus Christ.

In fact this verticality is a characteristic of the building chosen by Gaudí to symbolise elevation towards God. This is achieved with the rising pyramidal design outside, the loftiness of its naves, and the pinnacles on top of the towers that seem to fuse with the sky.

The life and teachings of Jesus are represented on portals of the three facades. Each one represents one of the three crucial events of Christ’s existence: his birth: his Passion, Death and Resurrection; and his present and future Glory. As the sun moves across the sky, its light further emphasises the qualities (generosity, harmony, or drama) of each facade.

Gaudí planned for the light inside the Sagrada Familia to be harmonious and to accentuate the plasticity of the nave, but above all to be conducive to introspection.

The branching columns, as well as having a structural function, reflect Gaudí’s idea that the inside of the temple should be like a wood that invites prayer and is fitting for celebrating the Eucharist.

To lessen the load of the roofing and bring light into the building he designed lucarnes or skylights in between the columns, based on hyperboloids, built using pieces of golden and green glass and tiles to reflect daylight inside. All the stained glass in the apse follows a plan of graduated tones to create an atmosphere suitable for introspection.

Information provided in part by: sagradafamilia.org