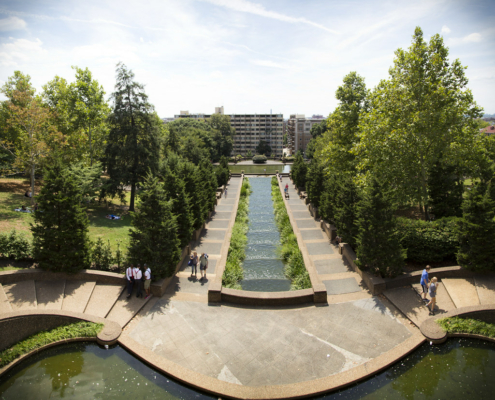 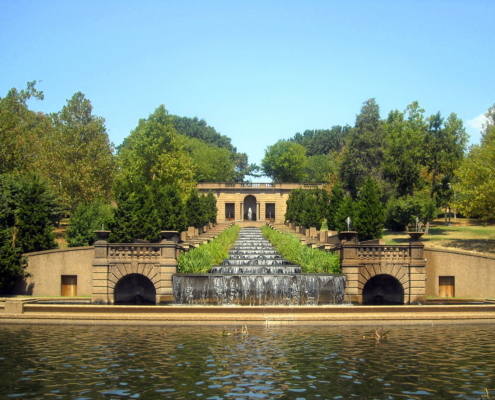 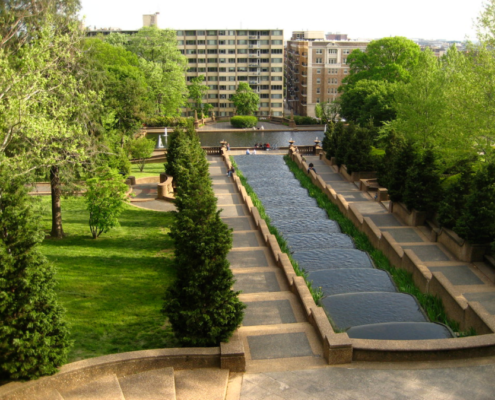 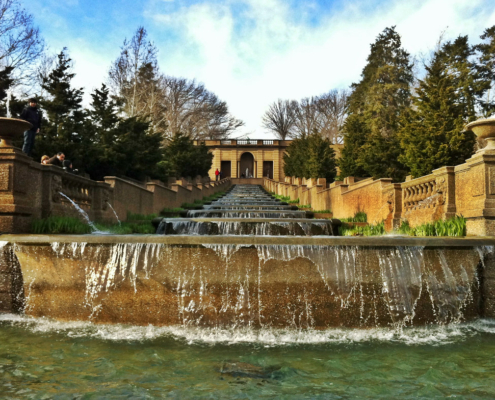 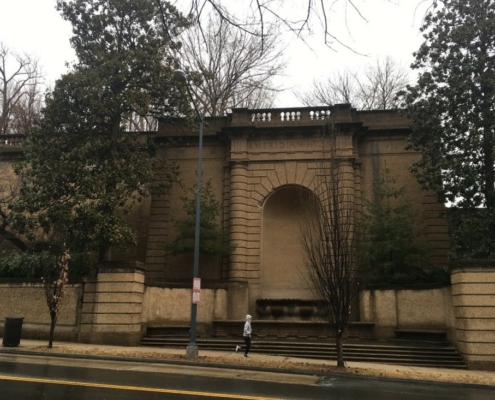 The name Meridian Hill comes from a proposal in the early 1800s to establish an official meridian or longitudinal base point--for map-making and other purposes--through the mid-point of the White House. A plaque at the upper entrance to the park from 16th Street takes official note of an 1816 meridian marker which stood on the proposed meridian. Meridian Hill Park was designed and built between 1912 and 1936, and has been under the jurisdiction of the National Park Service since 1933. The idea of a park at the site goes back to the 1901 McMillan plan for the city, which suggested a park on both sides of 16th Street at Meridian Hill in recognition of the site's panoramic views and important position relative to the L'Enfant Plan for the city.The park is divided into two principal areas: the lower park, with a water cascade of linked basins, symmetric stairways and a large reflecting pool surrounded by a plaza; and the upper park with an open mall, wooded areas flanking the mall, and a broad terrace overlooking the lower park. The land comprising Meridian Hill park was purchased by Congress in 1910, due in part to the efforts of Mary Foote Henderson, a private citizen and park advocate with considerable real estate interests in the area. The first plans for the park were drawn up by landscape architect George Burnap, and approved by the Commission of Fine Arts in 1914. Burnap's Italianate design suited the steep topography and exploited the views from the crest of the escarpment. The features of his design were centered on a single longitudinal axis extending north-south through the site. The elevated north end of the park featured a fountain, formal gardens, and a great terrace. A water cascade of linked basins was planned for the steep slope to the south, terminated by rectangular reflecting pools in a plaza at the foot of the hill. In 1917, landscape architect Horace Peaslee replaced Burnap but largely remained true to Burnap's intentions; however, Peaselee abandoned the elaborate formal gardens of the upper portions of the park and replaced them with an open mall. The construction of the park relied on techniques and materials advanced for their time. The terraces, walls and pavements--almost all the structural elements in this highly structured landscape--were rendered in pre-cast and cast-in-place concrete treated in a variety of ways. The concrete contractor, John J. Earley, was a highly skilled craftsman who interpreted mosaic pavements, urns, balustrades, niches, and planting containers in concrete. / A number of important monuments and memorials have been placed in the park since the 1920s. The Buchanan Memorial, was one of the first planned although it was not dedicated in its site until 1930. It remains the only memorial to President James Buchanan in Washington. In 1922, a statue of Joan of Arc, a copy of the figure by Paul Dubois at Reims Cathedral, was installed directly on the main cross axis of the park. Dante was also put in place that year. A marble allegorical figure of Serenity was installed in 1925. The scope and ambition of Meridian Hill Park set it apart; the idea of creating a Renaissance villa landscape in the middle of an American city to serve as a public park and cultural institution has no true parallel. The park is perhaps the most ambitious and successful example of Neoclassical park design in the United States, and it is an example of extremely high artistic merit. The breadth of its ambition, its remarkable integrity, and the masterful sureness of its design and construction single it out for recognition.