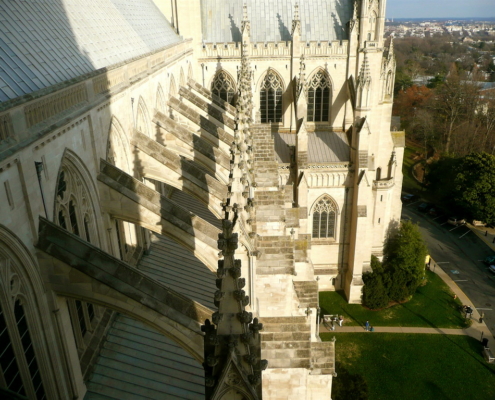 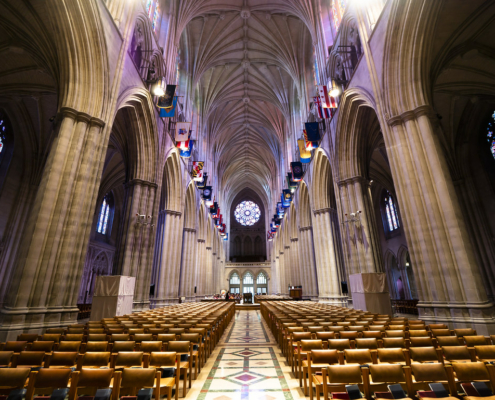 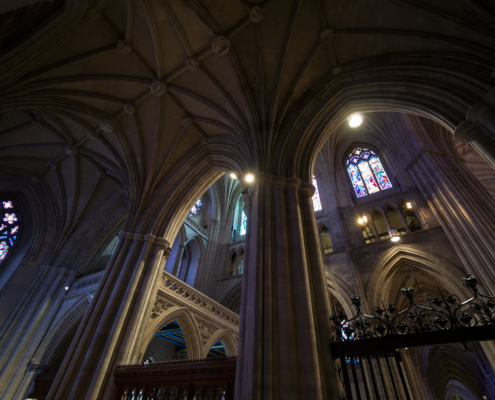 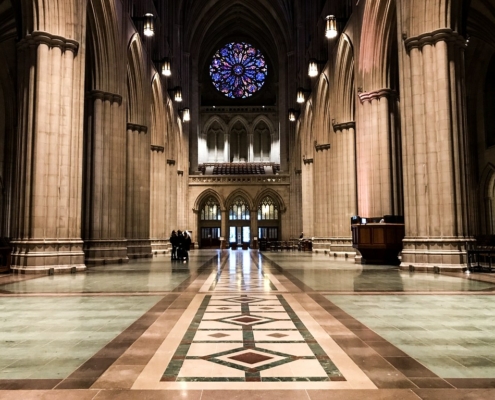 The National Cathedral, completed in 1990, is the culmination of a two-century-long plan for a majestic Gothic-style cathedral. This richly decorated cathedral is located on a landscaped 57 acre plot of land on Mount Saint Albans in Northwest Washington, 400 feet above sea level. The cathedral consists of a long narrow rectangular mass, the eight bay nave and the five bay chancel, intersected by a six bay transept. Above the crossing, rising just over 300 feet above grade, is the Gloria in Excelsis Tower. The Cathedral is the sixth largest in the world, second largest in the United States. The top of the tower is the highest point in D.C. The one story porch projecting from the south transept has a large portal with a carved tympanum. This portal is approached by the Pilgrim Steps, a long flight of steps 40 feet wide. The primary building material is gray Indiana limestone; some concrete and structural steel are used sparingly. The building abounds in architectural sculpture, wood carving, leaded glass, mosaics, artistic metal work, and many other works of art, including over 200 stained glass windows. Most of the decorative elements have Christian symbolism or are memorials to famous persons or events. On January 4, 1792, descriptions from President Washington's disclosed plan for the "City of Washington, in the district of Columbia" were published in The Gazette of the United States, Philadelphia. Lot "D" was set aside and designated for "A church intended for national purposes, ..., assigned to the special use of no particular sect or denomination, but equally open to all." The National Portrait Gallery now occupies that site. A century later in 1891, a meeting was held to revive plans to build the church intended for national purposes. It was to be a Christian cathedral. In 1893 the Protestant Episcopal Cathedral Foundation of the District of Columbia was granted a charter from Congress to establish the cathedral and the site on Mount Saint Albans was chosen. Bishop Satterlee chose Frederick Bodley, England's leading Anglican church architect, as the head architect. Henry Vaughan was selected to be the supervising architect. The building of the cathedral finally started in 1907 with a ceremonial address by President Theodore Roosevelt. When construction of the cathedral resumed after a brief hiatus for World War I, both Bodley and Vaughan had passed away; American architect Philip Hubert Frohman took over the design of the cathedral and is known as the principal architect. The Cathedral has been the location of many significant events, including the funeral services of Woodrow Wilson and Dwight Eisenhower. Its pulpit was the last one from which Martin Luther King, Jr. spoke prior to his assassination. The Cathedral is the burial place of many notable people, including Woodrow Wilson, Helen Keller, Admiral George Dewey, Bishop Satterlee and the architects Henry Vaughan and Philip Frohman.