The Basilica of the National Shrine of the Immaculate Conception 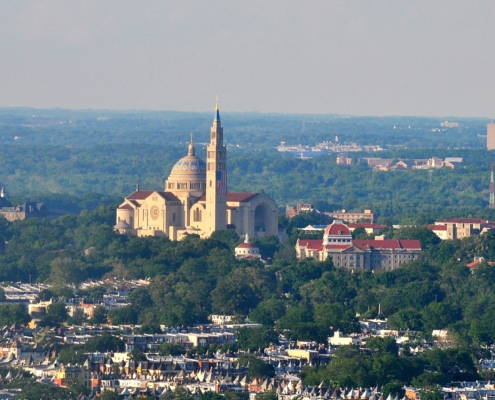 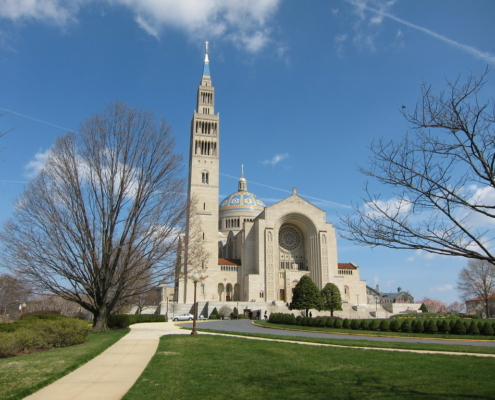 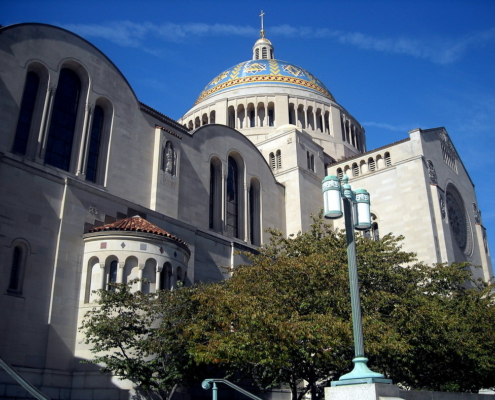 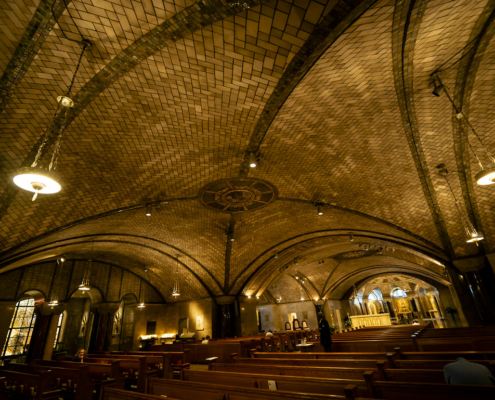 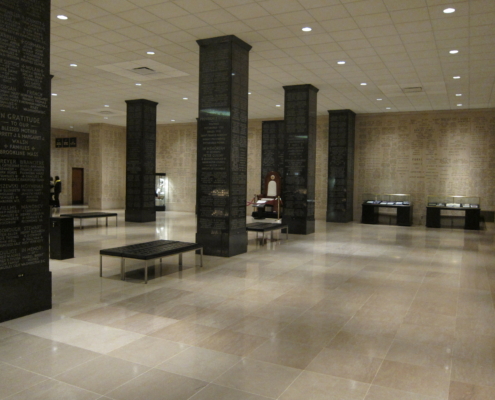 The Basilica of the National Shrine of the Immaculate Conception took thirty-nine years to build from the time construction was started in 1920 until it was completed in 1959, after a brief hiatus during World War II. To achieve an original design that was “sunk in tradition yet distinctively American,” architects Maginnis and Walsh of Boston chose a Romanesque-Byzantine style for a national Catholic monument to symbolize the faith and love of the United States for its patroness, the Blessed Virgin Mary under her title of the Immaculate Conception. Romanesque architecture is defined by its massive size, thick walls, arches, piers, groin vaults, towers and ornamented ambulatories, while Byzantine architecture is noted for its most distinctive feature, the dome. In Byzantine architecture, a circular or elliptical dome is placed over a square or rectangular room by means of pendentives, triangular constructions which strengthen and support the base that holds the dome. The Romanesque-Byzantine style was chosen for the National Shrine to permit the building of the exterior at one time and the interior at another, to harmonize with the architecture of Washington, D.C., and to be distinct from the Washington National Cathedral--the Gothic Episcopalian cathedral whose construction was underway at the time. Today, the Basilica of the National Shrine of the Immaculate Conception is the largest Roman Catholic church in North America, and it is among the ten largest churches in the world. It is constructed entirely of stone, brick, tile and mortar—without structural steel beams, framework or columns. The Basilica contains the world’s largest collection of contemporary ecclesiastical art. Furthermore, the artistic embellishment of the Basilica, both inside and out, is in keeping with the Romanesque-Byzantine style of its architecture. Romanesque art is very enthusiastic in its use of figurative or stone sculpting. The exterior of the Basilica contains both heroic size figures of saints and finely sculpted tympana and archways. Tympana sculpted in relief ornament the interior east and west entrances and various niches in the nave and chancel areas. Stained and faceted glass windows decorate both the Upper and Lower Church areas. Byzantine art is remarkable in its use of mosaic and marble. This includes the mosaic ornamentation of seven main domes along with the many side chapels and oratories. The church is also adorned with beautiful marble claddings. The finer marbles open out allowing the marble veining to form symmetrical patterns.

The National Mall Scroll to top