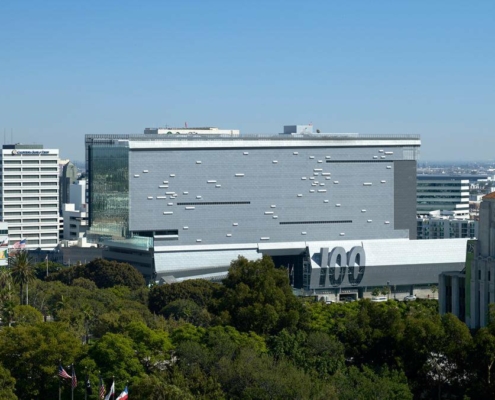 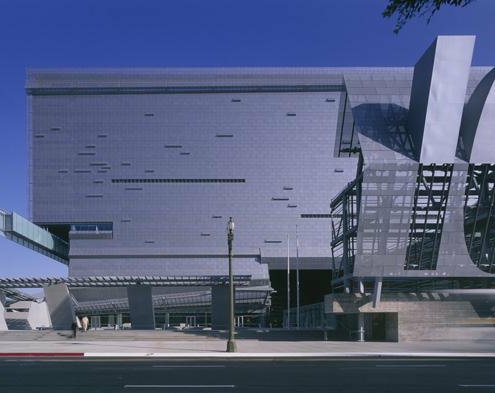 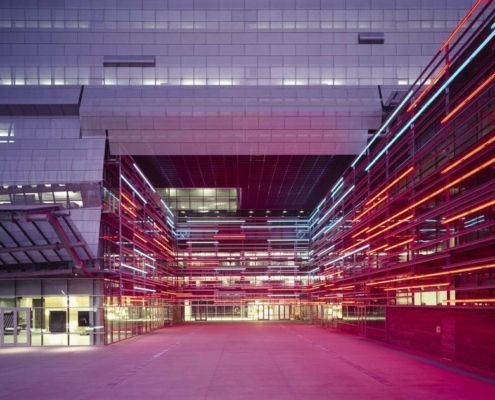 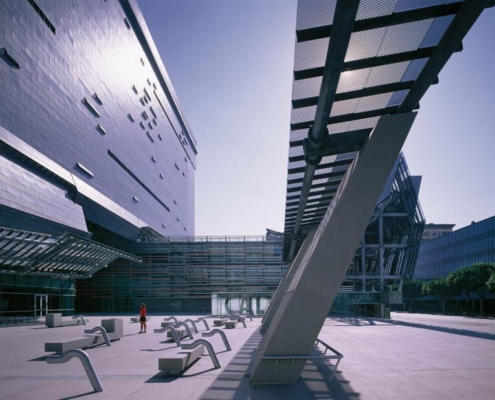 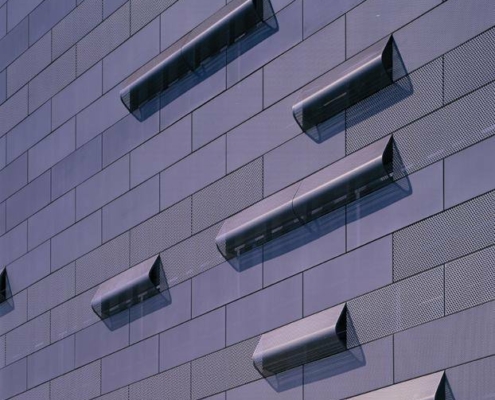 Covering an entire block of downtown Los Angeles, the Caltrans District 7 Headquarters, designed by Morphosis Architects, was the first building in California to be commissioned under the Design Excellence Program. Two distinguishable masses create an L-shaped plan which opens the architecture to the street, allowing for an accessible, public plaza. The larger of the two volumes rises 13 stories and is set back 155 feet from Main Street, while the smaller four story volume elegantly extends from its counterpart. A striking quality that distinguishes Morphosis architecture is the mechanical nature of the skins, both in their aesthetics and in their function. The intelligent skin reacts to its environment in striking ways as it opens and closes depending on temperature and sunlight conditions. This creates a constantly shifting facade that is closed and therefore more private during the light of the day and becomes open and transparent during the night. Photovoltaic cells cover the entire southern facade of the Caltrans building which acts to shield the facade from direct sunlight during peak hours while generating 5% of the building's energy. A distinct skin system covers the facade bordering Main Street, where perforated aluminum panels cover a double layer of glass. The layer of panels continues over the courtyard, establishing a canopy and creating a transition space where building meets plaza. Another green initiative taken by Morphosis in the Caltrans District 7 Headquarters is the skip-stop elevators which conserve energy while speeding up vertical circulation.

A main motive in this circulation scheme was to increase intermediate gathering spaces for employees, and to encourage employees to take the stairs. A graphic sign marks the building as 100 South Main Street, where layers of opacity and transparency as well as 2D and 3D typography interplay to designate the space to visitors. The public spaces are located on ground level and include an exhibition gallery, a large public art piece, retail stores and a cafeteria. Artist Keith Sonnier is credited for his addition to the outdoor lobby, creating a light installation titled Motordom. Using a half-mile of argon and neon tubes in red and blue, he creates a piece that is reminiscent of the streaks of headlights on California freeways. This is very fitting for the California Transportation Building, and similar ideas of movement become apparent through various cantilevers and extrusions of the building itself. The Caltrans 7 building is recognizable to individuals outside the realm of architecture, as the design and construction process was documented over four episodes of Modern Marvels on the History Channel. This broadened the range of architectural knowledge about the project by presenting the unique challenges of constructing the building. It is also known for its importance in the work of Thom Mayne, who was awarded the 2005 Pritzker Prize with the help of this innovative project."