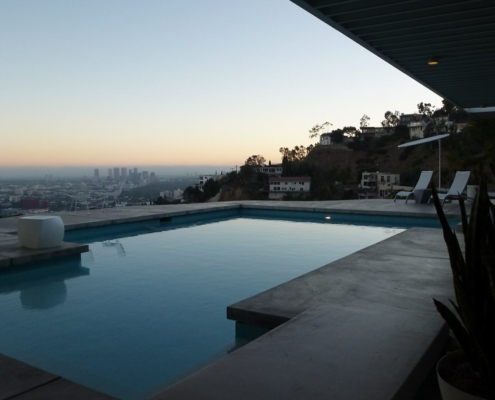 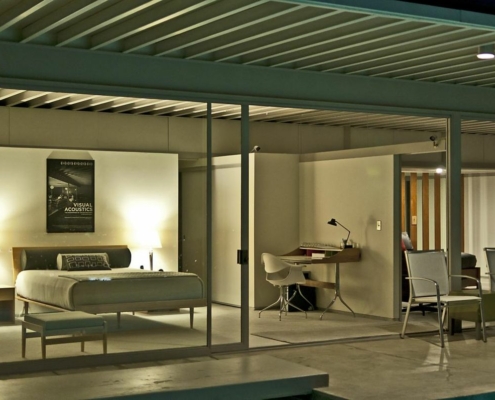 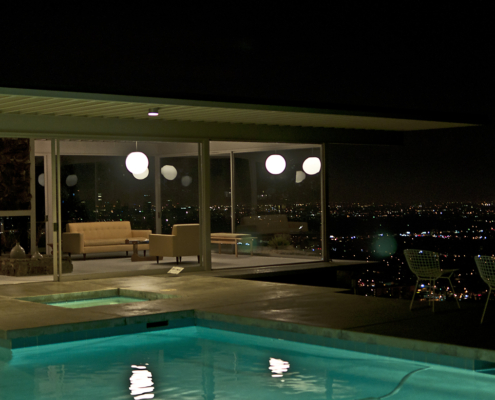 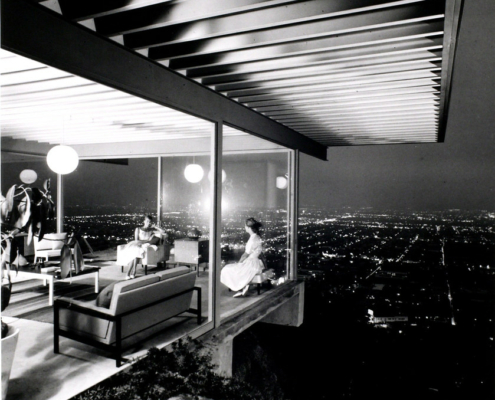 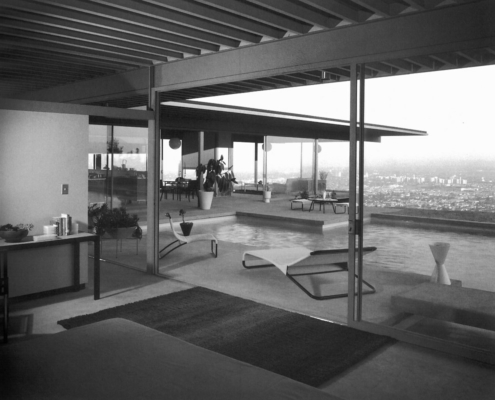 The Stahl House by Pierre Koenig (also known as Case Study House #22) was part of the Case Study House Program, which produced some of the most iconic architectural projects of the 20th Century. The modern residence overlooks Los Angeles from the Hollywood Hills. It was completed in 1959 for Buck Stahl and his family. Stahl envisioned a modernist glass and steel constructed house that offered panoramic views of Los Angeles when he originally purchased the land for the house in 1954 for $13,500. When excavation began, he originally took on the duties of both architect and contractor. It was not until 1957 that Stahl hired Pierre Koenig to take over the design of the family’s residence. The two-bedroom, 2,200 square foot residence is a true testament to modernist architecture and the Case Study House Program. The program was set in place by John Entenza and sponsored by the Arts & Architecture magazine. The aim of the program was to introduce modernist principles into residential architecture, not only to advance the aesthetic but to introduce new ways of life, both stylistically and as a representation of modern lifestyle. Koenig was able to hone in on the vision of Buck Stahl and transform that vision into a modernist icon. The glass and steel construction is the most identifiable trait of the house’s architectural modernism, however, way in which Koenig organized the spatial layout of the house, taking both public and private aspects into great consideration, is also notable. As much as architectural modernism is associated with the materials and methods of construction, the juxtaposition of program and organization are important design principles that evoke utilitarian characteristics. The house is “L”-shaped, completely separating the public and private sections except for a single hallway connecting them. The adjacent swimming pool, which must be crossed to enter the house, is not only a spatial division of public and private but it serves as the interstitial space in which visitors can best experience the panoramic views. The living space of the house is behind the pool and is the only part of the house that has a solid wall, which backs up to the carport and the street. The entire house is one large viewing box, capturing amazing perspectives of the house, the landscape, and Los Angeles. Oddly enough, the Stahl house was fairly unknown and unrecognized for its advancement of modern American residential architecture until 1960 when photographer Julius Shulman captured the pure architectural essence of the house in a shot of two women sitting in the living room overlooking the bright lights of the city of Los Angeles. That photo put the Stahl House on the architectural radar as an architectural gem hidden in the Hollywood Hills. The Stahl House is still one of the most visited and admired buildings today. It has undergone many interior transformations. Today, you will not find the same iconic 1960s furniture inside, but the architecture, the view, and the experience still remain.