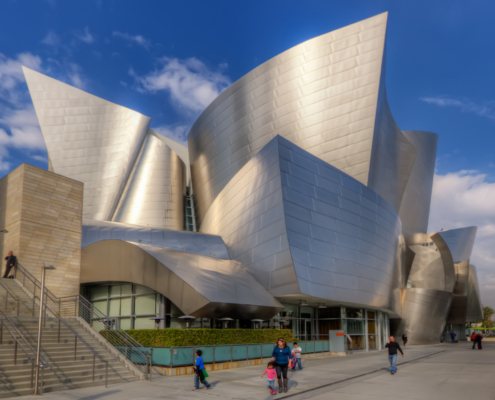 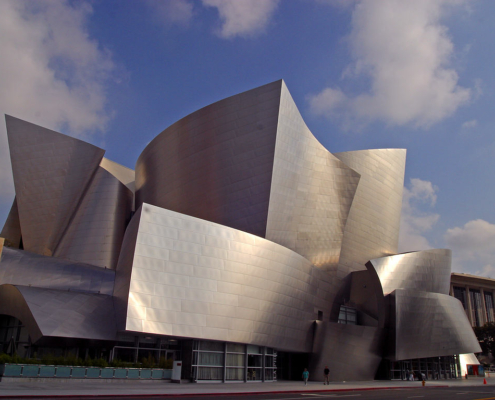 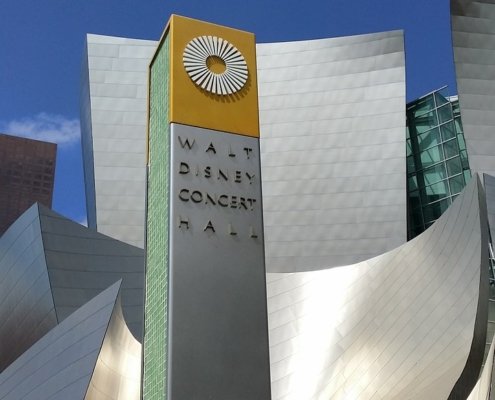 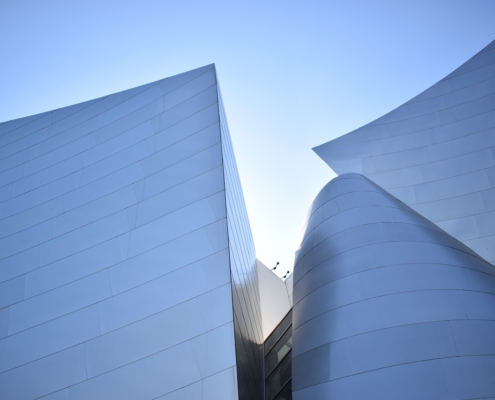 Completed October 23, 2003, The Walt Disney Concert Hall celebrates its tenth anniversary today. Home to the LA Philharmonic, it has received wide acclaim for its excellent acoustics and distinctive architecture. In the decade since its opening, the hall's sweeping, metallic surfaces have become associated with Frank Gehry’s signature style. In 1987, Lilian Disney donated $50 million to establish a concert hall in honor of her late husband, Walt. Frank Gehry was selected from among several candidates during a design competition the following year. His proposal was largely oriented toward the public, with much of the site allocated to open gardens. Several years into the project, a combination of political and managerial impediments threatened its realization. The concert hall was designed as a single volume, with orchestra and audience occupying the same space. Seats are located on each side of the stage, providing some audience members with distant views of the performers’ sheet music. Curvilinear planes of Douglas fir provide the only partitions, delineating portions of the 2,265 member audience without creating visual obstructions. The steel roof structure spans the entire space, eliminating the need for interior columns. The organ stands at the front of the hall, a bouquet of 6,134 curved pipes extending nearly to the ceiling. It is the unique result of a collaboration between Gehry and Manuel J. Rosales, a Los Angeles-based organ designer. Gehry worked with Yasuhisa Toyota, the acoustical consultant, to hone the hall’s sound through spatial and material means. To test the acoustics, they used a 1:10 scale model of the auditorium, complete with a model occupant in each seat. This required all elements to be scaled accordingly, including increasing the frequency of sound in the space to reduce the wavelength by a factor of ten. The concert hall's partitions and curved, billowing ceiling act as part of the acoustical system while subtly referencing the sculptural language of the exterior.

The exterior is a composition of undulating and angled forms, symbolizing musical movement and the motion of Los Angles. The design developed through paper models and sketches, characteristic of Gehry's process. The custom curvature demanded a highly specific steel structure, including box columns tilted forward at 17º on the building’s north side. Visitors can glimpse the steel frame through a skylight in the pre-concert room and view the supporting structure from a stairway leading to the garden. The reflective, stainless steel surface engages light as an architectural medium. The facade's individual panels and curves are articulated in daylight and colored by city lights after dark. The building was initially set to be clad in stone, but a more malleable material was chosen following the completion of the Guggenheim Museum Bilbao, the concert hall's titanium-clad cousin. Thin metal panels allowed for more adventurous curvature and could be structurally disassociated from the ground. The metallic forms appear to hover above an asymmetrical band of glazing at the building’s base. Glass fissures in the facade bring light into the lobby and pre-concert room, reading as a grand entryway through the otherwise opaque facade. The hall’s planning committee conceived of the project as a civic amenity, hoping it would serve as a catalyst in the activation of LA's downtown. Some critics debate the effectiveness of this siting strategy, acknowledging an increase in surrounding property values but little shift in the city's cultural epicenter. Perhaps that will change as development continues on the site."