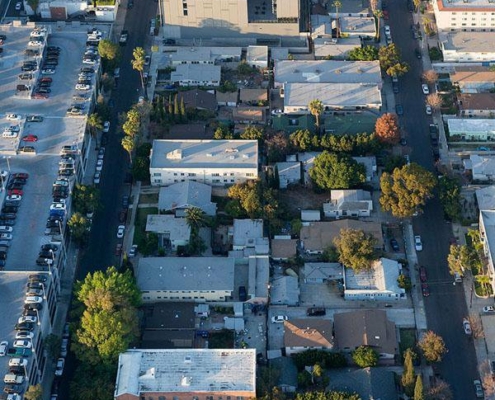 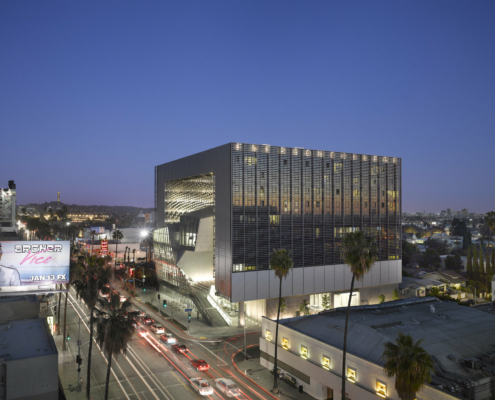 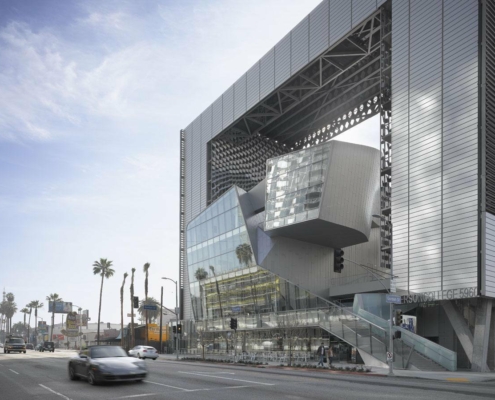 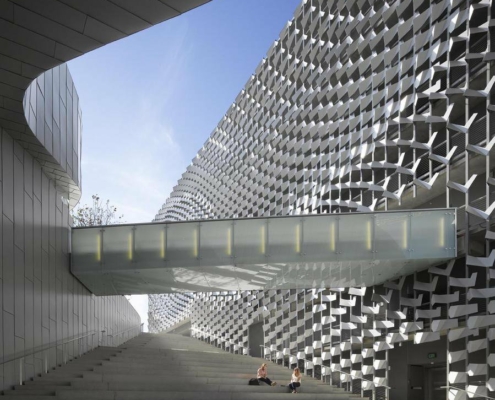 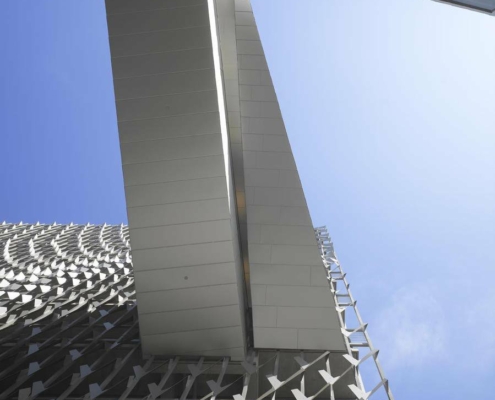 Drive down Los Angeles’s Sunset Boulevard and you’ll discover Morphosis Architects’ latest project, a futuristic cube, rising from a strip of lowly fast food outlets. The structure is the West Coast micro-campus for Boston’s Emerson College, and is home to 217 students majoring in television, film, marketing, acting, screenwriting, and journalism. As you draw closer, the solid mass reveals itself as a proscenium, framing a patch of blue sky. The building’s two residential towers bookend open-air courtyards and performance spaces. “Some might say it is an aggressive building, but I see it as rather classical,” says Thom Mayne, FAIA, principal of Morphosis Architects, with offices in Culver City, California, and New York. “[The design] is a critique of an institutional building as a big block.” At 107,400 square feet and 10 stories high, Mayne’s building is a robust addition to the neighborhood’s transformation, which is being spurred by the city’s Hollywood Redevelopment Project. The structure, on track to achieve LEED Gold certification, is not a traditional academic building. Emerson College, with the support of a strong alumni community, commissioned the $85 million facility to accommodate its long-standing internship program, which brings students to L.A. each year to work in the media and film industries. The building boasts 188 student rooms and four faculty apartments, as well as classrooms, faculty offices, and video and film production labs. Mayne, an Angeleno who studied in the Boston area at the Harvard Graduate School of Design, recognized the culture shock potential between the two cities and based his concept on an idea about urbanism that mediates between East Coast density and the wide-open L.A. basin. His concept weaves an imagined urban fabric from indoor and outdoor spaces, including courtyards that double as performance spaces. A large outdoor stair serves as a gathering area for students, but it’s also an amphitheater equipped with theatrical lighting for public events. “Los Angeles can be a very complicated and opaque place to visit,” Mayne says. But sitting on the steps looking out at the Hollywood sign framed by his building, there’s no confusion: This is L.A.

The Broad Museum Scroll to top