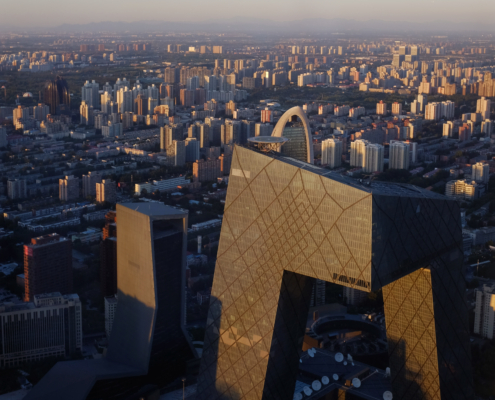 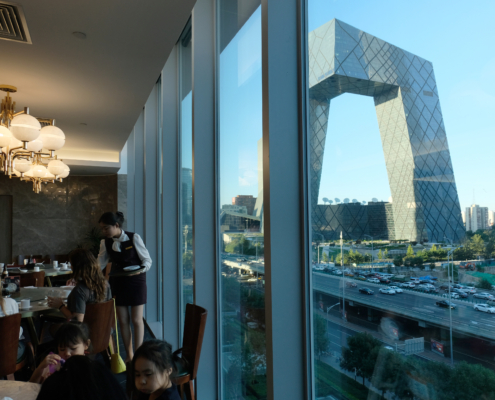 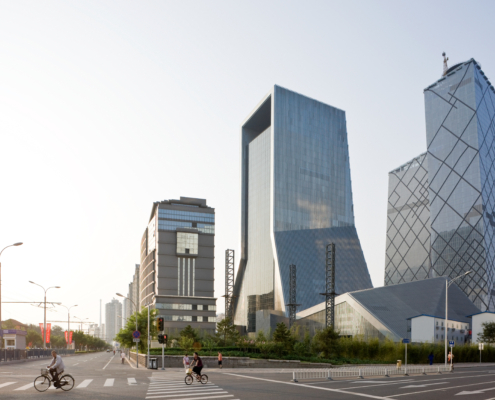 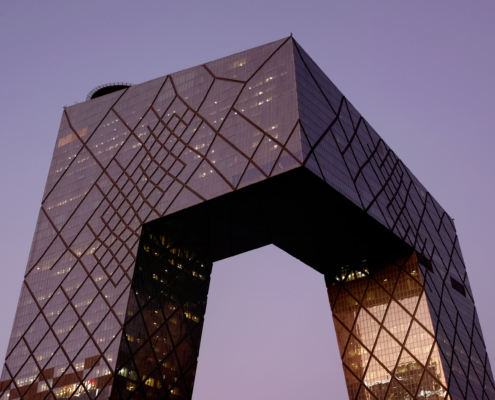 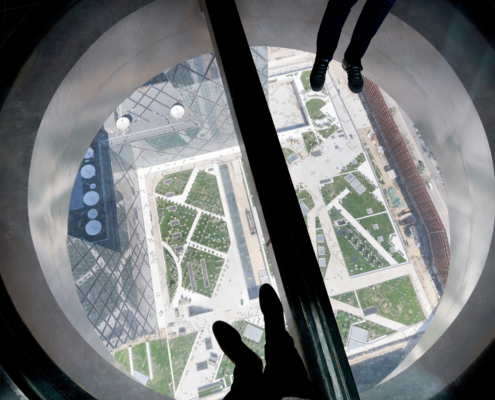 The CCTV headquarters aims at an alternative to the exhausted typology of the skyscraper. Instead of competing in the race for ultimate height and style within a traditional two- dimensional tower ‘soaring’ skyward, CCTV’s loop poses a truly three-dimensional experience, culminating in a 75-metre cantilever. The building is visible from most of Beijing; it sometimes comes across as big and sometimes small, from some angles strong and from others soft.

CCTV’s form facilitates the combination of the entire process of TV-making in a loop of interconnected activities. Two towers rise from a common production studio platform, the Plinth. Each tower has a different character: Tower 1 serves as editing area and offices, and the lower Tower 2 is dedicated to news broadcasting. They are joined by a cantilevering bridge for administration, the Overhang.

The innovative structure of the building is the result of long term collaboration between European and Chinese engineers to achieve new possibilities for the high-rise. The forces at work within the structure are rendered visible on the façade: a web of triangulated steel tubes – diagrids – that, instead of forming a regular pattern of diamonds, become dense in areas of greater stress, looser and more open in areas requiring less support. The façade itself becomes a visual manifestation of the building’s structure.

The 10,000-square metre main lobby, in Tower 1, is an atrium stretching three floors underground, and three floors up. It has a direct connection with Beijing’s subway network, and will be the arrival and departure hub for the 10,000 workers inside CCTV headquarters. Connected to the lobby, 12 studios (the largest is 2,000 square metres) perform the main function of the building: TV making.

The CCTV headquarters also facilitates an unprecedented degree of public access to the production of China’s media: a Public Loop takes visitors on a dedicated path through the building, revealing everyday studio work as well as the history of CCTV, and culminating at the edge of the cantilever, with spectacular views towards the CBD, the Forbidden City, and the rest of Beijing.

National Center for the Performing Arts Scroll to top