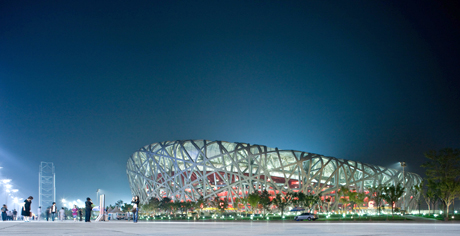 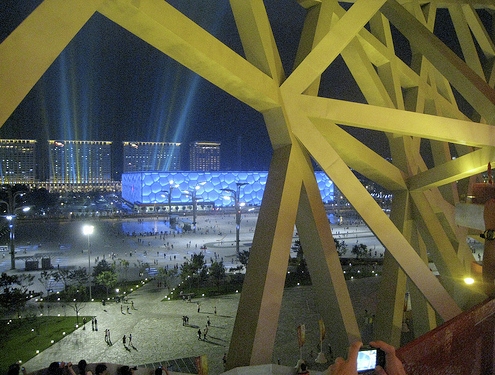 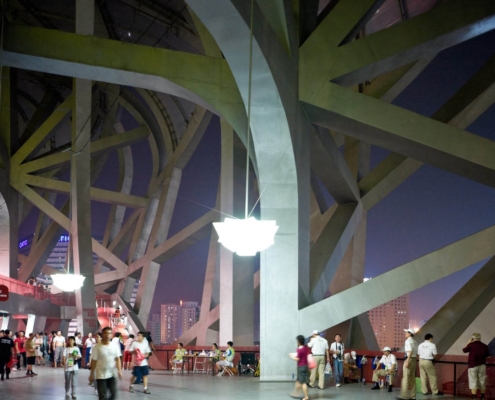 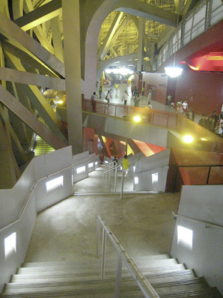 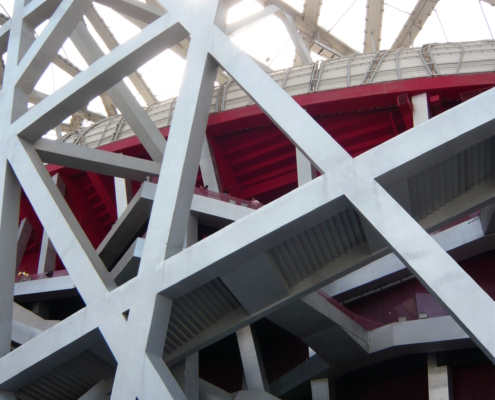 The National Stadium is situated on a gentle rise in the centre of the Olympic complex to the north of Beijing. Its location is predefined by the master plan. All other urban and architectural decisions were initiated by our competition project and subsequently implemented in our construction project. Our most important principle throughout has been to develop an architecture that will continue to be functional following the Games in 2008, in other words, to create a new kind of urban site that will attract and generate public life in this part of Beijing. Significantly, the Chinese themselves nicknamed the stadium "Bird‘s Nest" in the very early stages of the project, thereby essentially assimilating it as their own, before it had even left the drawing board.

From the distance, the stadium looks like a gigantic collective shape, like a vessel whose undulating rim echoes the rising and falling ramps for spectators inside the stadium. From this distant perspective, one can clearly distinguish not only the rounded shape of the building but also the grid of the load-bearing structure, which encases the building, but also appears to penetrate it. What is seen from afar as a geometrically clear-cut and rational overall configuration of lines, evaporates the closer one comes, finally separating into huge separate components. The components look like a chaotic thicket of supports, beams and stairs, almost like an artificial forest.

In this Piranesian space, people get together in restaurants, bars, hotels, and shops, or on the platforms and the crisscrossing horizontal, diagonal and vertical paths of access. This space, surrounding the interior of the stadium, is façade, structure, decoration, and public space all in one. It is the link between the city outside and the interior of the stadium and is, at the same time, an autonomous, urban site. Herein lays the real potential of the project; it aims to be more than an Olympic sports arena for one single, admittedly unique occasion. This area between inside and outside affords the opportunity to create a new kind of urban and public place – even more so since people in Beijing love public life and are experienced users of public space. Sports, games, later rock concerts and other activities will, of course, dominate the use of the interior, while the new park on the plinth will invite people to stop a while and relax; the really novel feature of the project is clearly the transitional space between interior and exterior. This is the space that will inspire people to move about, to be together and to enjoy each other’s company.