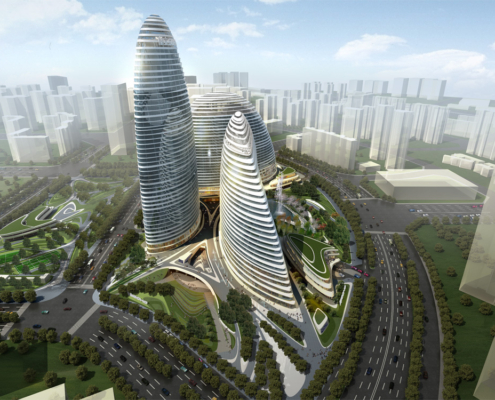 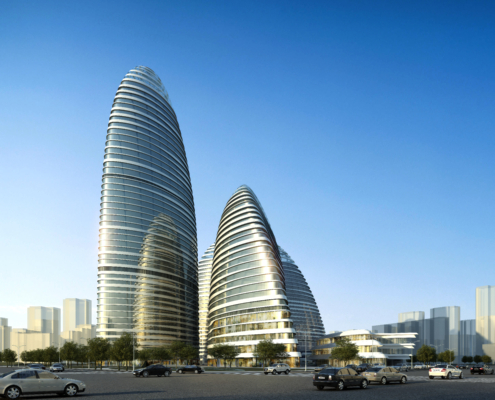 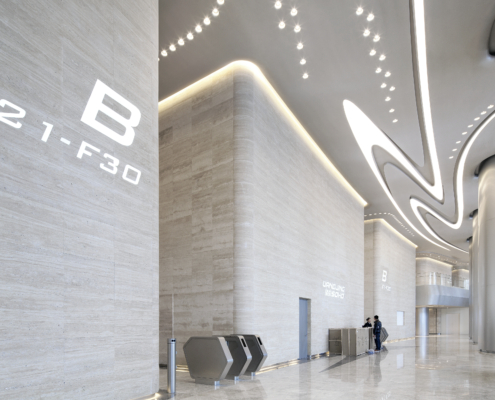 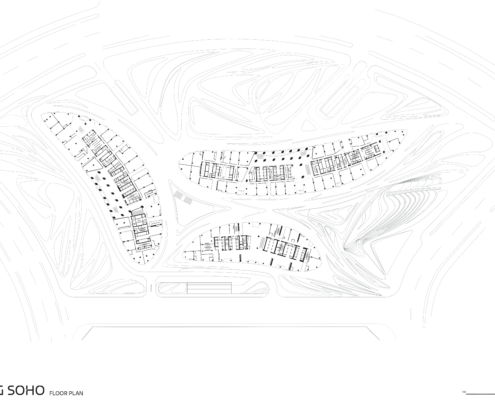 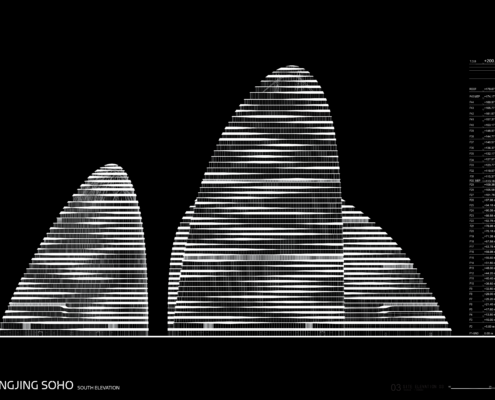 Wangjing SOHO is located in northeast Beijing between Fourth and Fifth Ring Roads. Served by Wangjing and Wangjing East subway stations on Line 15, and the Wanjing West interchange station with Line 13 - as well as the Futong and Wangjing South stations to be built as part of the new of the Line 14 - the site is near the Airport Expressway approximately halfway between Beijing’s Capital Airport and the centre of the city. Access to each of these key transport links has contributed to the fluid composition of Wangjing SOHO. Developed in the mid-1990’s as a large residential area approximately 12 kilometres from the city center, Wangjing has also become a key hub for Beijing’s IT and telecommunications. There is an increasing demand for a variety of flexible office spaces in Wangjing: from units with the smallest floor area to suit new firms with a single employee - yet also offering the possibility for expansion; to offices with a large open-plan arrangements to house the Beijing headquarters of a global IT corporations.

Wangjing Soho is a mixed-use development consisting of three towers 118, 127, 200 meters in height designed as three interweaving ‘mountains’ that fuse building and landscape to bring together the surrounding community with a new 60,000m2 public park. The design responds to the flows of the city and allows natural daylight into each building from all directions. The juxtaposition of the tower’s fluid forms continuously changes when viewed from different directions, appearing as individual buildings in some views, or as a connected ensemble in others. The orientation and composition of the towers has been defined to direct visitors and staff to the various transport links that surround the site. The cohesive design of the project creates an anchor and identity for the growing Wangjing community. Dividing the total 560,000 m2 built area required by the client into three smaller buildings has reduced the scale of the project, in comparison to a single building placed on the 115,393 m2 fan-shaped site. Large public spaces open 24 hours a day include a park to the south and landscaped gardens to the north, east and west with activity zones and water features that have already become popular areas for the local community. The large entrance lobbies for each tower face outwards towards the city and extend through each building to the central shopping street and plaza in- between the towers that in turn flows into public gardens and courtyards.

The total above-ground floor area of Wangjing SOHO is 392,265 m2, with four levels below ground totaling 129,000 m2 that includes secure parking for 8256 bicycles and showers for cyclists. Priority charging spaces for low-emission vehicles are also included within the basement car park. The thin floor plates provide flexible, open- plan office space and the tapering section of each tower provides the extensive natural daylighting to each office, retail and lobby. Windows on every floor of the towers open to enable each office to be naturally ventilated whenever appropriate.