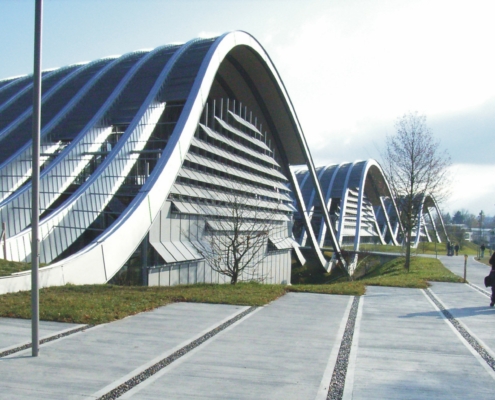 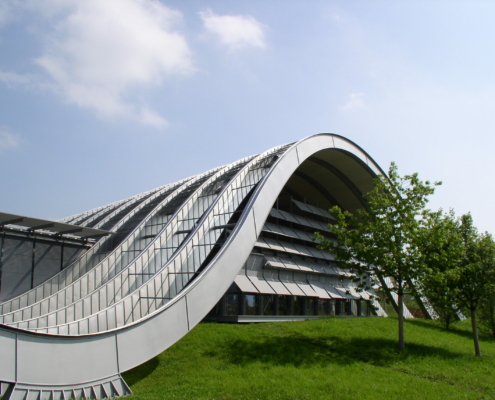 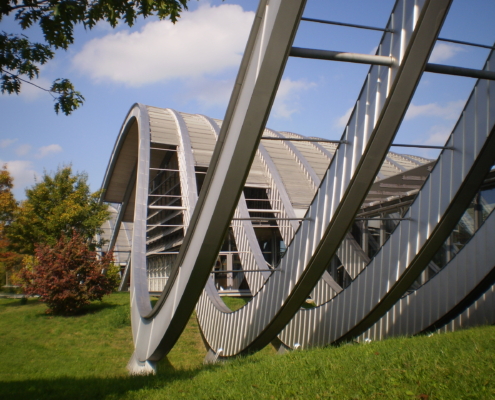 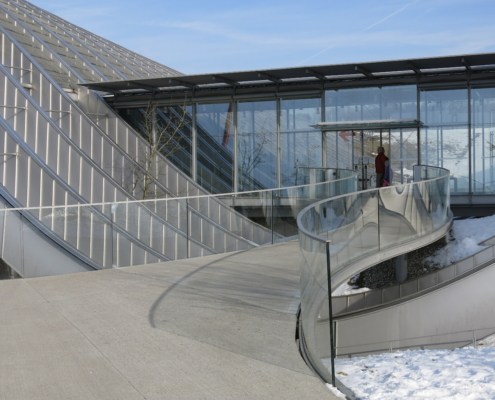 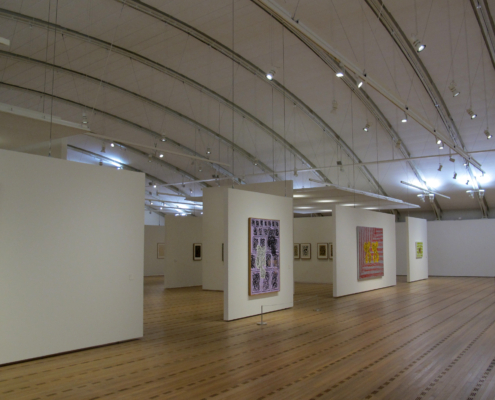 "Designed by Renzo Piano Building Workshop Architects, The museum was commissioned by the artist’s heirs and was the fruit of the generosity of arts patron Maurice E. Müller. Built to house over 4,000 of Paul Klee’s works of art under a single roof, the Zentrum is located in the eastern outskirts of Bern, an area marked on one side by the curve of a motorway and on the other by the distant profile of the Alps. One of the inspirations for the project’s design was the morphology of the region, its vast expanse of hills and cultivated fields. The architecture of the Zentrum was conceived as a gentle wave contouring the land. It is barely visible from a distance, the curvature of the structure creating three artificial hills containing the exhibition space, a concert hall, a conference centre and a centre for the study, research and promotion of Klee’s works, as well as an interactive museum for children known as Creaviva, which also organises workshops on topics revolving around art. If the artistic themes encompassed by the museum reflect the multidisciplinary talent of the German-Swiss Klee – an artist and teacher with close ties to music and poetry -, the design of the building and the physiognomy of its space interpret his passion for a harmony of form and the proportions of nature. From a topographical point of view, the Zentrum project is an enlargement of the scale of the land, its space and peaceful silence. The tranquility here is not just acoustic, but visual as well, a fundamental goal of this structure. The three rolling ‘hills’ are connected by a covered pathway that runs along the entire length of the western façade. Because of the complex geometric curvature of each piece of the undulating roof covering the structure, the steel beams were individually hand-welded. The resulting complex sculpture appears to sew the landscape together and flow alongside the cultivated fields that surround it. The steel and glass facade of the building faces west and is equipped with shading devices in textile, partially fixed and partially motorized, which filter natural light into the interior. For Klee’s watercolors, canvases and drawings to be properly preserved, they require a luminosity of between 50 and 100 lux, so artificial light is filtered onto them through white screens. The complex nature of the shapes and articulations of the body of work of German-Swiss artist Paul Klee is reflected in the architecture of the Zentrum. The museum is part and parcel of the rolling hills and blends in with the natural landscape of the countryside outside of Bern. Its curved roof made of long steel beams welded together one by one houses one of the most extensive monographic collections in the world."

Information provided in part by: Arch 2.0