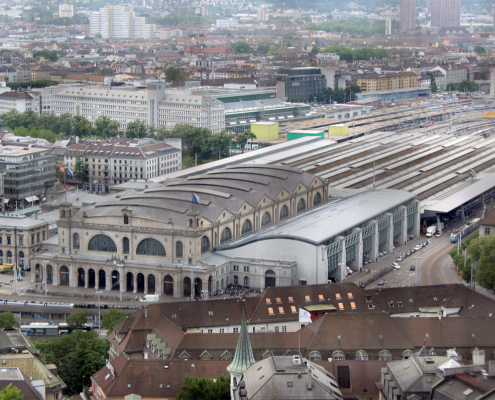 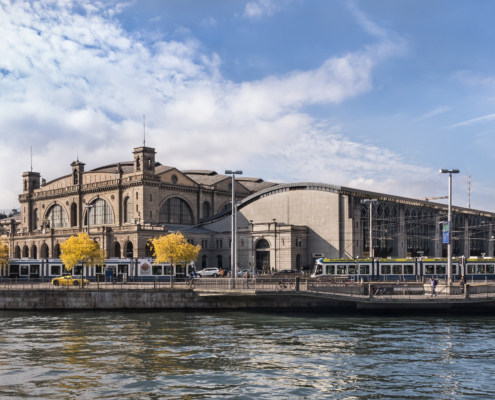 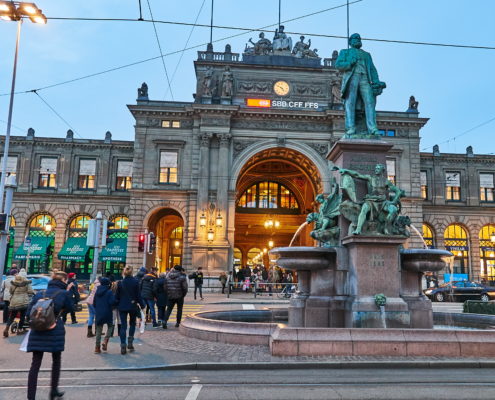 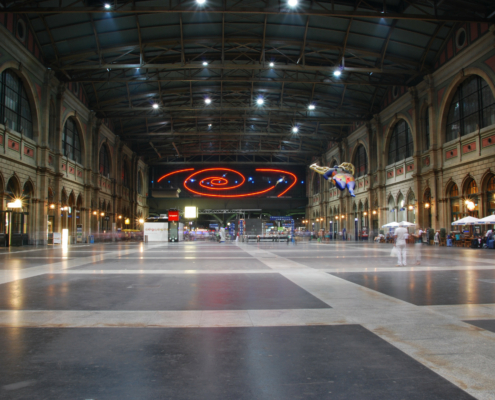 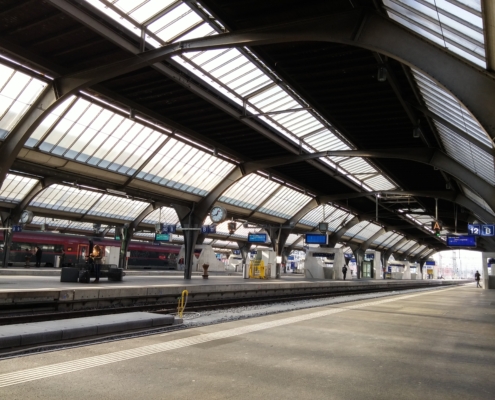 The new underground Löwenstrasse transit station forms the centrepiece of the cross-city rail link. With its four railway tracks and two platforms it is situated below tracks 4 to 9 of the upper central station. The east end of the platform is aligned underneath the transverse hall of the historical main station, after which the tunnel descends beneath the River Limmat towards Oerlikon. Towards the west a ramp concludes by feeding the track into the existing rail network above the Langstrasse underpass and onwards to the railway lines running through the Limmat Valley. The layout of the Löwenstrasse station consciously borrows from the concept of the existing Museumstrasse regional railway station. The main difference, however, is that the platform level of the Löwenstrasse station is equipped with two 420-meter-long central platforms, allowing them, after the completion of all the building phases, to additionally accommodate longer intercity carriage compositions. Above the platform, which is situated 16 meters below ground, is a new shopping level, stretching both east and west and interrupted by the River Sihl, which flows beneath the main station. Three cross connections – the broadened Sihlquai passage, the new Gessnerallee passage and the extension of the existing Löwenstrasse passage – create short transfer routes and connect the Löwenstrasse station with other areas of the main station and the adjoining areas of the city. Straightforward and clearly arranged access improves the general orientation in the underground sections of the complex. Generously dimensioned passages and halls facilitate free passenger flow. The three functionally differing levels – the platform level, the shopping level and the historical overground station hall – are strictly separated from each other in spatial terms. This differentiation is also expressed in the materialisation, creating readily identifiable locations. Vertical means of access such as stairs, escalators and lifts are formed as continuous solid-structure conveyance cores running through all the levels. Their geometry responds to the existing built surroundings, forming individual volumes that, in part, also perform structural functions, for instance acting as bearings for existing supports in the listed roof of the railway station. The fact that the track positions in the new underground station could not be aligned to mirror those in the platform hall above necessitated the development of a special solution for the passenger lifts emerging from the Löwenstrasse station by using slanted shafts. The inclined lift casings stand out spatially, acting as markers to the geometrical constraints of the infrastructure developments of the past decades. The design of the subterranean spaces creates a distinct, friendly and clear atmosphere. Light, smooth and stylish surfaces transform the shopping level into a modern shopping centre as a circulation space. In the process the same material and lighting concepts are applied in all of the halls and passages. Flanked by the stringent lighting concept, the simple and robust materialisation and colour scheme in the open shop fronts, the closed wall spaces, the floors and the ceilings creates a neutral spatial impression. The architecture is highly functional and dispenses with decoration. The shop-window displays, the advertising, the SBB wayfinding system and the people themselves impart enough colour to the spaces. The architecture forms a calm backdrop to the signage, the uses and the advertising.