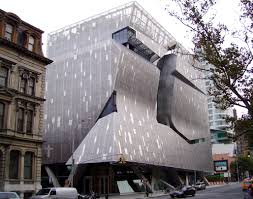 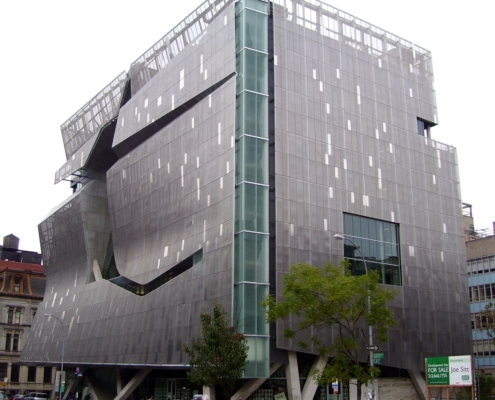 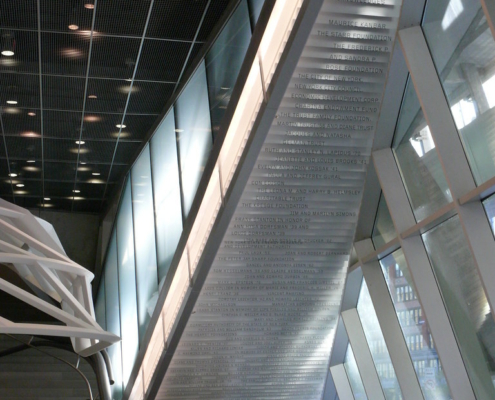 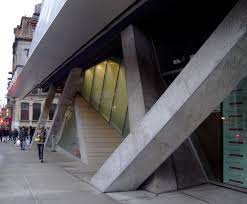 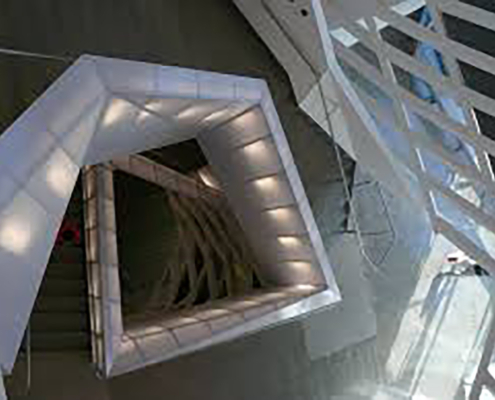 41 Cooper Square, the new academic building for The Cooper Union, aspires to manifest the character, culture and vibrancy of both the 150 year-old institution and of the city in which it was founded. The institution remains committed to Peter Cooper’s radically optimistic intention to provide an education “as free as water and air” and has subsequently grown to become a renowned intellectual and cultural center for the City of New York. Internally, the building is conceived as a vehicle to foster collaboration and cross-disciplinary dialogue among the college’s three schools, previously housed in separate buildings. A vertical piazza—the central space for informal social, intellectual and creative exchange—forms the heart of the new academic building. An undulating lattice envelopes a 20-foot wide grand stair which ascends four stories from the ground level through the sky-lit central atrium, which itself reaches to the full height of the building. This vertical piazza is the social heart of the building, providing a place for impromptu and planned meetings, student gatherings, lectures, and for the intellectual debate that defines the academic environment. From the double-high entry lobby, the grand stair ascends four stories to terminate in a glazed double-high student lounge overlooking the city. On the fifth through ninth floors, sky lobbies and meeting places—including a student lounge, seminar rooms, lockers, and seating areas overlooking the cityscape—are organized around the central atrium. Sky bridges span the atrium to create connections between these informal spaces. Further reinforcement of the strategy to create a vibrant intellectual space is provided by the “skip-stop” circulation strategy which allows for both increased physical activity and for more impromptu meeting opportunities. In the spirit of the institution’s dedication to free, open and accessible education, the building itself is symbolically open to the city. Visual transparencies and accessible public spaces connect the institution to the physical, social and cultural fabric of its urban context. At street level, the transparent facade invites the neighborhood to observe and to take part in the intensity of activity contained within. Many of the public functions - an exhibition gallery, board room and a two-hundred-seat auditorium - are easily accessible one level below grade. The building reverberates with light, shadow and transparency via a high performance exterior double skin whose semi-transparent layer of perforated stainless steel wraps the building’s glazed envelope to provide critical interior environmental control, while also allowing for transparencies to reveal the creative activity occurring within. Responding to its urban context, the sculpted facade establishes a distinctive identity for Cooper Square. The building’s corner entry lifts up to draw people into the lobby in a deferential gesture towards the institution’s historic Foundation Building. The façade registers the iconic, curving profile of the central atrium as a glazed figure that appears to be carved out of the Third Avenue façade, connecting the creative and social heart of the building to the street. This aggregation of progressive green building initiatives combines with the building’s social spaces and urban connectivity to support Cooper Union in advancing its legacy of innovative ideas, cross-disciplinary knowledge, and creative practices well into the future.