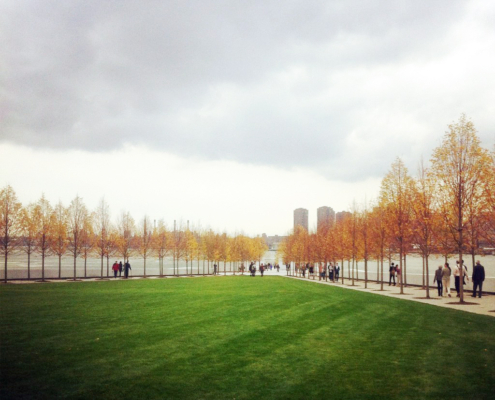 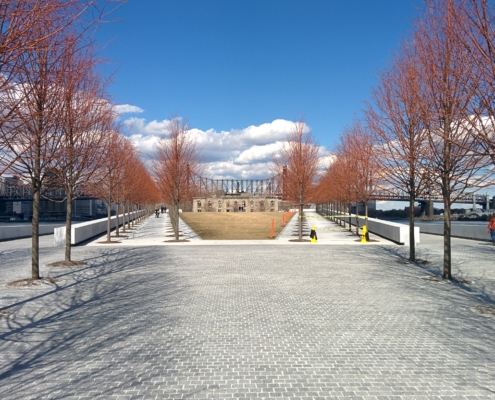 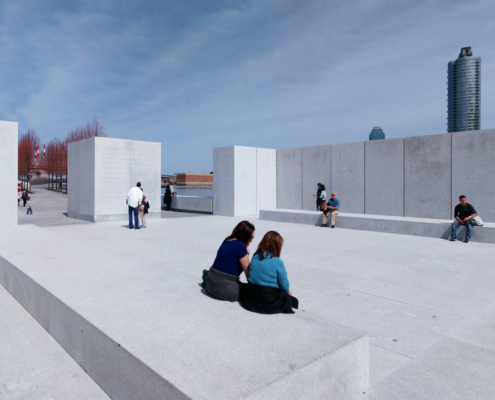 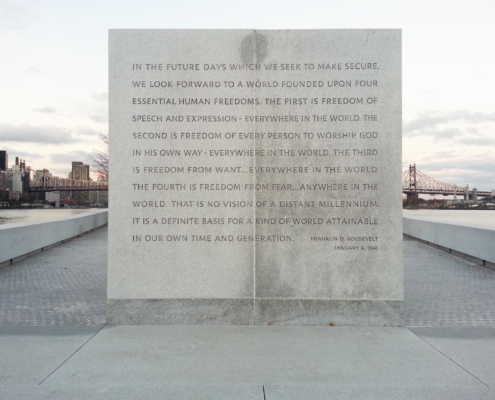 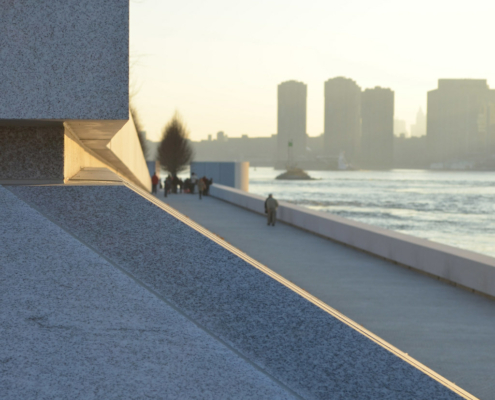 John F Kennedy got an airport, George Washington a bridge, Abraham Lincoln a tunnel. But the FDR Four Freedoms Park bucks the trend. The four-acre site extends like a stony arrowhead from the southern tip of Roosevelt Island, parting the fast-moving currents of the East river. Standing on its tip feels like being at the prow of a ship: seals bask on the rocks in front, while the waters to the west are framed by the cliff face of Manhattan, and to the east by the jumble of Queens. Tall granite blocks line the edge of this open-topped deck, which is reached via a narrowing lawn that slopes gently downwards , bordered by lime trees. It is a composition of elemental simplicity but with immense spatial power: it's a bit like being all alone in a room at the very end of the earth, with the entire world focused behind you to a single point. ""I had this thought that a memorial should be a room and a garden, that's all I had,"" said Kahn in 1973. ""The garden is somehow a personal kind of control of nature. And the room was the beginning of architecture."" From this basic pairing, Kahn developed a finely nuanced landscape that draws its impact from strong shifts in perspective and an almost stage-set theatricality. You enter from the north, past the crumbling gothic ruins of an old smallpox hospital, to be greeted by an imposing set of steps. Nothing of the park is revealed until you walk up them. Then the lawn and trees appear to shoot off into the distance, squeezed towards a bronze head of FDR at the end of the island, contained within a spacious granite box. Inscribed on the back of this is Roosevelt's famous speech, in which he set out the four freedoms everyone in the world should enjoy: freedom of speech, freedom of worship, freedom from want and freedom from fear. Delivered in 1941, its purpose was to persuade Americans to enter the second world war. The park has the feel of an ancient temple precinct, but with the unusual sensation that the land is falling away from you as you head towards the sacred shrine, rather than rising towards a hallowed mount. Look back – across an oasis of sunbathing bodies and dreaming couples on a hot summer's day – and the perspective has the opposite effect. The view is dramatically compressed: the triangular lawn now seems square, while the hospital ruins provide an eerie backdrop, poking up behind a line of copper beech trees. As the climax of this composition, the granite room is intended to be a place of contemplation, reminiscent of the Pacific-facing plaza of the Salk Institute. Furnished with two simple benches and open to the waters at the southern tip, it is what Kahn called ""a space of inspired use"", represented in his sketches by a man playing the violin. The 12ft-high pillars that line each side, weighing 36 tonnes apiece, sit an inch apart, their polished sides amplifying the views they thinly frame. Put your ear to the gap and, seashell like, you can hear the roar of the river.

Information provided in part by: The Guardian - Oliver Wainwright