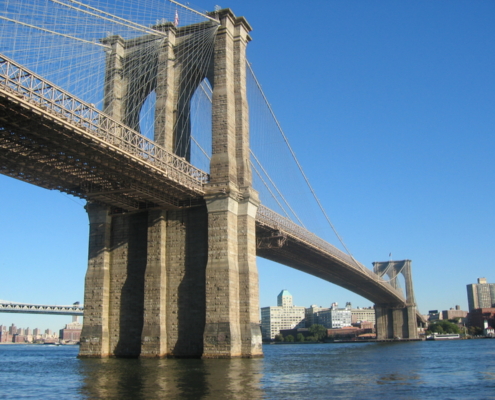 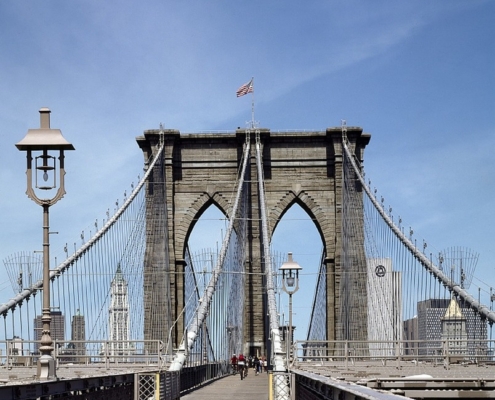 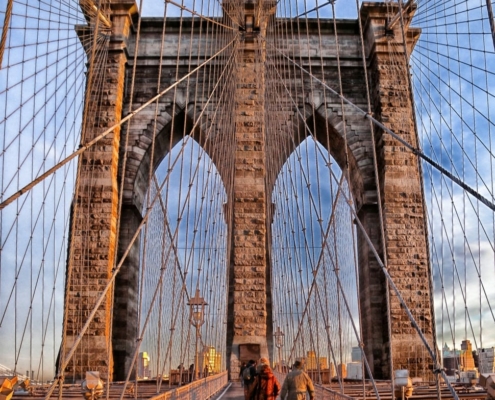 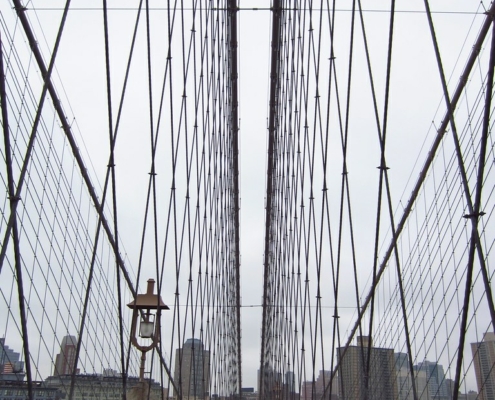 As one of oldest and arguably the most cherished suspension bridges in New York, and perhaps the world, the Brooklyn Bridge is as valuable and breathtaking today as it was the day it was built. Designed by John Roebling in the late 1860s and completed in 1883 by his son and daughter-in-law Washington and Emily Roebling, the bridge changed the world’s attitude toward steel construction, revolutionized suspension bridge building, and transformed New York into the city it is today. Due to the East River, which is not technically a river at all but an exceedingly turbulent tidal strait, New York City and Brooklyn spent much of the 19th century as separate cities—New York being the 1st largest and Brooklyn the 3rd largest but the fastest growing. Prior to 1883 the only connection between these two large cities was a system of inefficient, overcrowded, unsafe, and unreliable ferries. Something needed to be done, and serious talk about bridging the two cities goes as far back as 1800. The river was not only turbulent and had a seafloor that would require the deepest cassion foundations of its day, but the river also happened to be “one of the busiest stretches of navigable saltwater anywhere on earth. Together these challenges and the significance of the project demanded an architectural and engineering masterpiece. In 1867 Roebling’s monumental gesture across the East River answered that call. He proposed a suspension bridge hung between two massive gothic towers that would nearly reach from shore to shore in “one grand flying leap.” In order to keep the waterways unobstructed he knew the central span had to be both high and long. Rather than traversing perfectly horizontal, Roebling designed the bridge to bow sensuously upward from 119 feet at the towers to a height of 130 feet. This was 30 feet higher than Robert Stephenson’s Britannia Bridge over the Menai Strait, and the nearly sixteen hundred foot span between towers made it the single longest span in the world until 1903. To accomplish this feat Roebling had to design the two towers strong enough to shoulder both the load of the four 15” steel cables carrying the roadway and tall enough to hold the span high enough as not to interfere with the river traffic. These granite and limestone towers were to be the most massive structures built on the continent, and at 276.5 feet they would be taller than every building in New York except the spire of Trinity of Church. Adding to the grandeur, the roadways pass through these towers via gothic arches that “rise more than a hundred feet, like majestic cathedral windows or the portals of triumphal gateways.” Perhaps the most enjoyed and unique feature of Roebling’s design is the elevated boardwalk for pedestrians. Similar to Fredrick Law Olmsted who had completed Central Park in 1873, Roebling felt the value of such a promenade would be incalculable to a crowded commercial city. It would allow for leisure, fresher air, and uninterrupted views of the city. Yet, it was Roebling’s insistence on using steel wire cables that has made the greatest impact on architecture and humanity. No bridge in the country or building in the world used steel before the Brooklyn Bridge. Prior to that all wire bridges used iron as most engineers questioned steel’s structural properties. However, once the largest suspension bridge ever built demonstrated its strength, architects and engineers never looked back. It was Roebling’s use of steel that would eventually lead to the buildings that now tower over his great bridge.