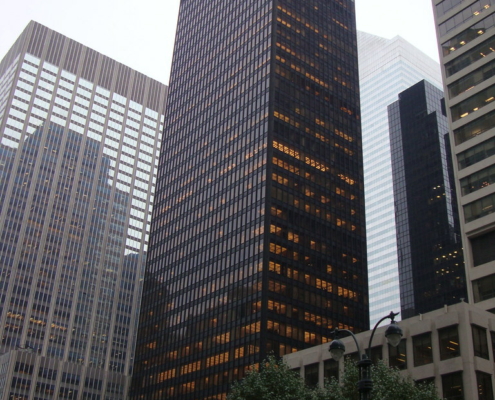 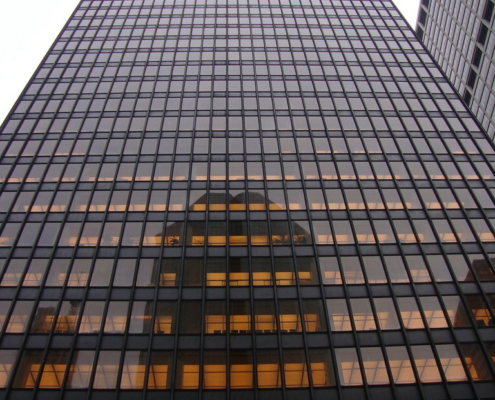 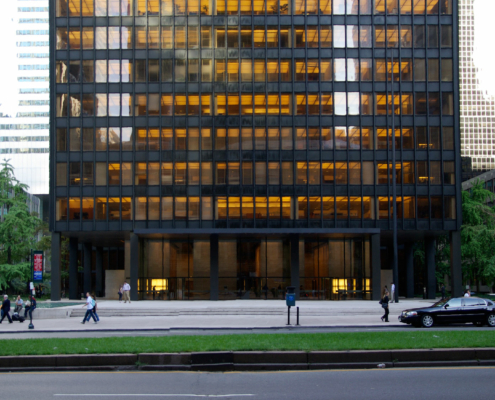 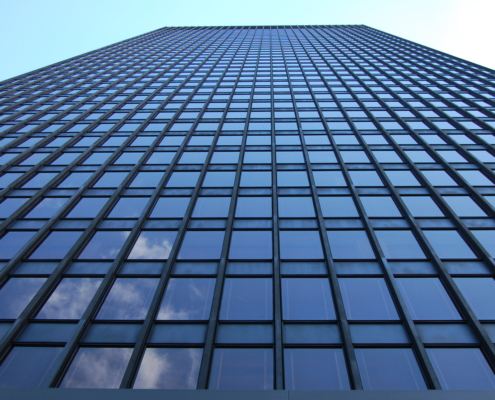 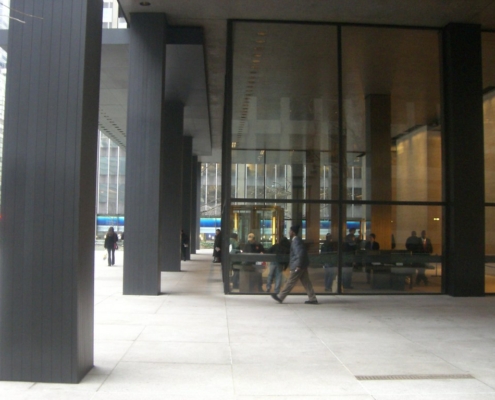 Located in the heart of New York City, the Seagram Building designed by Mies van der Rohe epitomizes elegance and the principles of modernism. The 38-story building on Park Avenue was Mies' first attempt at tall office building construction. Mies' solution set a standard for the modern skyscraper. The building became a monumental continuity of bronze and dark glass climbing up 515 feet to the top of the tower, juxtaposing the large granite surface of the plaza below. Mies' response to the city with the Seagram Building was the grand gesture of setting back the building 100 feet from the street edge, which created a highly active open plaza. The plaza attracts users with its two large fountains surrounded by generous outdoor seating. By making this move, Mies distanced himself from New York urban morphology, lot line development, and the conventional economics of skyscraper construction. The plaza also created a procession to the entry of the building, providing the threshold that linked the city with the skyscraper. This threshold continues into the building as a horizontal plane in the plaza that cuts into the lobby. The lobby also has a white ceiling that stretches out over the entry doors further eroding the defined line between interior and exterior. The office spaces above the lobby, furnished by Philip Johnson, have flexible floor plans lit with luminous ceiling panels. These floors also get maximum natural lighting with the exterior being glass panes of gray topaz that provide floor-to-ceiling windows for the office spaces. The gray topaz glass was used for sun and heat protection, and although there are Venetian blinds for window coverings they could only be fixed in a limited number of positions so as to provide visual consistency from the outside. The detailing of the exterior surface was carefully determined by the desired exterior expression Mies wanted to achieve. The metal bronze skin that is seen in the facade is nonstructural but is used to express the idea of the structural frame that is underneath. Additional vertical elements were also welded to the window panels not only to stiffen the skin for installation and wind loading, but to aesthetically further enhance the vertical articulation of the building. The Seagram Building, with its use of modern materials and setback from the city grid, became a prototype for future office buildings designed by Mies as well as a model for many buildings erected in its surroundings. This building, fifty years after its completion, is still admired by many visitors everyday and sets an example of an International style skyscraper amidst the New York skyline.