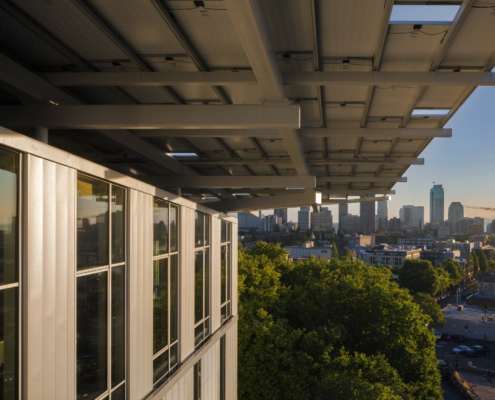 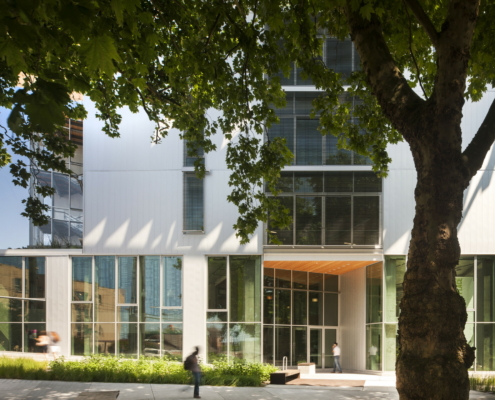 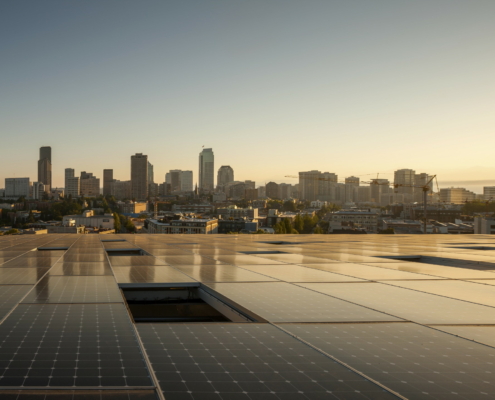 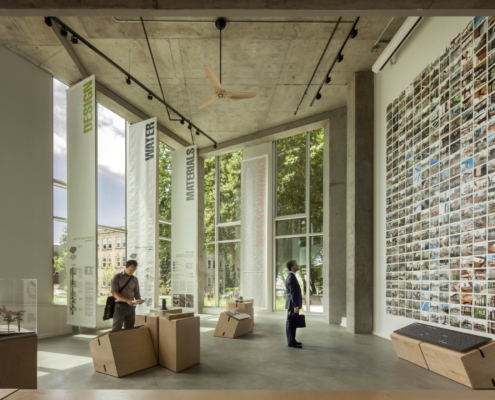 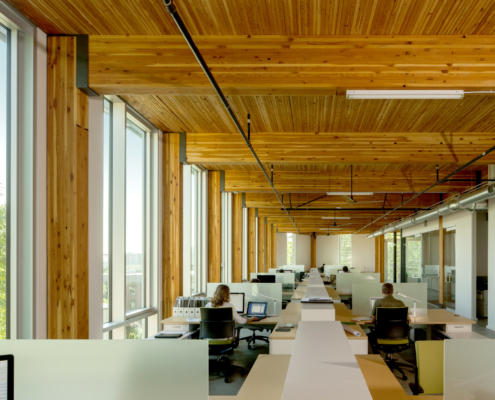 The Bullitt Center, a six-story, 50,000 square foot office building in Seattle that aspires to be the world's greenest commercial building, opens its doors to the public today on Earth Day. This $30 million ""living laboratory,"" designed by Miller Hull Partnership, distinguishes itself from other sustainable projects with its composting toilets, the exclusion of 350 common toxic chemicals - including PVC, lead, mercury, phthalates, BPA and formaldehyde - along with a strict energy and water budget that aims for self-sufficiency under the Living Building Challenge. The environmentally-conscious Bullitt Foundation hopes that the new center will demonstrate that carbon-neutral office space can be ""commercially viable and aesthetically stunning,"" a series of systems that can be easily copied elsewhere without being overly demanding in upkeep. There are quite a few systems that make the Bullitt Center not only unique but one-of-a-kind. One of them is its rainwater collection system into a 56,000-gallon cistern where the water is then filtered and disinfected. Another are the two rows of five bright blue aerobic composters, each about the size of a Fiat 500, composting human waste so odorlessly and efficiently that the first compost extraction will not be required for 18 months. A third is the building's rooftop array of photovoltaic panels, which extend far behind the building's edge to produce around 230,000 kilowatt-hours a year - hopefully just the right amount of energy for a building that is already 83% more efficient than a typical commercial site in Seattle. Perhaps the coolest thing about this collection of innovative systems is that they will all be visible. The mechanical and electrical rooms of the Bullitt Center will have large glass windows that display the state-of-the-art engineering, where tourists can scan quick response codes with a smartphone to learn about individual elements. In addition, a kiosk will be set up to let visitors know real-time measurements of the building's indoor air quality, energy consumption, photovoltaic power production and water levels. In fact, the building will be so closely monitored that managers will be able to track down energy consumption to an individual plug. But science isn't the only thing that the Bullitt Center has going for it. According to office workers, the building is made up of ""spectacular views, ample natural light and almost distracting quiet."" This is due in part to the exposed, 13-foot-high ceilings and 10-foot-high windows on the upper floors that contribute to an airy loftflike feel and maximize on daylight. It may be the first heavy-timber mid-rise building erected in Seattle since the 1920's, using native Douglas Fir certified by the Forest Stewardship Council for the timber and steel frame. Another signature feature of the building is a glass-enclosed stairwell nicknamed the ""irresistible stairway"" that coaxes visitors into climbing it using panoramic views of downtown Seattle and Puget Sound. Paired with a less conveniently located elevator that requires key card access, the stairwell is a smart way to encourage visitors and inhabitants to move while also conserving energy. One of the only possible setbacks of the Bullitt Center's design may be its lack of parking. In an effort to promote alternative forms of transportation, the designers decided to forgo a traditional parking garage for a series of bicycle racks but many are worried that Seattle's inadequate mass transit could create a lot of problems for commuting employees who will have to figure out other methods or places to park.