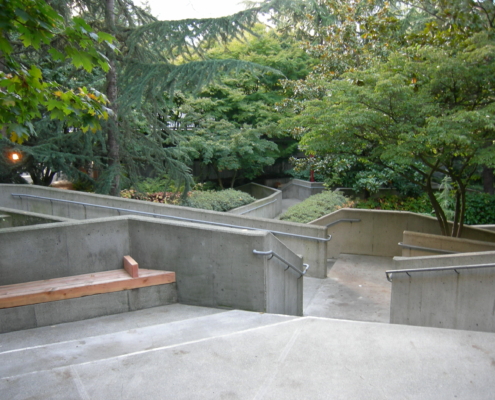 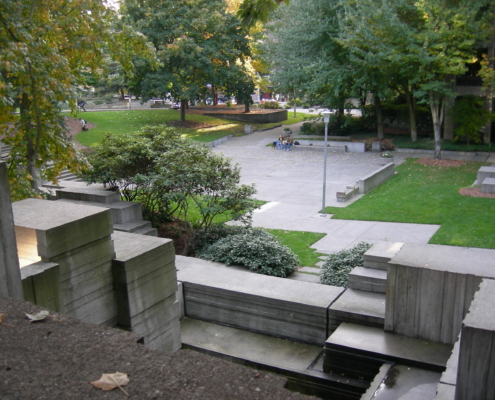 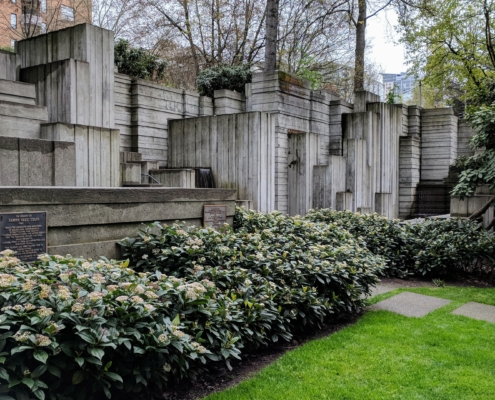 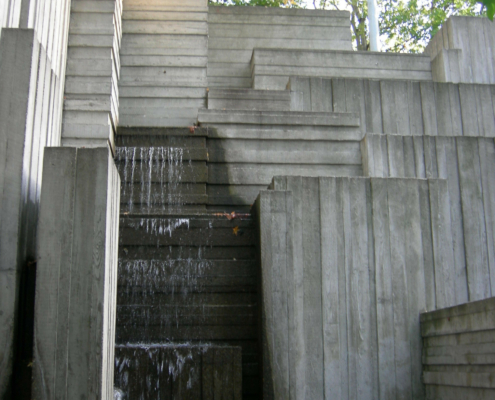 Seattle’s Freeway Park, a pioneering work of modernist landscape architecture by Lawrence Halprin and Angela Danadjieva is widely recognized as the world’s first freeway cap park. The 5.2-acre park opened on July 4, 1976, spanning over a depressed stretch of Interstate-5 in downtown Seattle. The park was expanded over the years, including the construction of a major addition in the 1980s and implementation of a tree canopy minimization plan in 2005; the original designers remained involved variously throughout these changes. When originally built, Danadjieva’s and Halprin’s designs symbolized the city’s effort to weave highway-adjacent areas back together following the route’s destructive beginnings. As a result, the park is organized as a web of stepped and zig-zagging walkways and terraces that surround a central walking path directly above the depressed highway. These walkways link the central path to formal park entrances, lawns, and plazas that are scattered on surrounding blocks and footholds. These areas are individually programmed to provide various types of leisure spaces. Architecturally-speaking, the park’s hardscapes are of their time and follow a Brutalist material palette. Throughout, the park features board-formed concrete surfaces—Halprin envisioned the park as a type of “freeway vernacular” that was inspired by and built from freeway-associated forms and materials—that become the retaining walls, planters, and knee walls that give the park its stark character. These terraces and planters are filled with broadleaf trees and shrubbery in mounds that rise and fall according to the surrounding natural and human-made geographies. The park is also well-known for a magnificent cascading raw concrete fountain that originally emptied into a deep pool that park-goers used as a swimming hole. The fountain’s steep and angular surfaces are based on the abstracted geologic forms of western mountain ranges and the fountain bears much resemblance to the Ira Keller Fountain designed by Halprin and Danadjieva in Portland, Oregon. The park is described as “one of the most compelling treatises on post-war landscape architecture” by The Cultural Landscape Foundation (TCLF), an organization that raises awareness about historic landscapes around the United States.