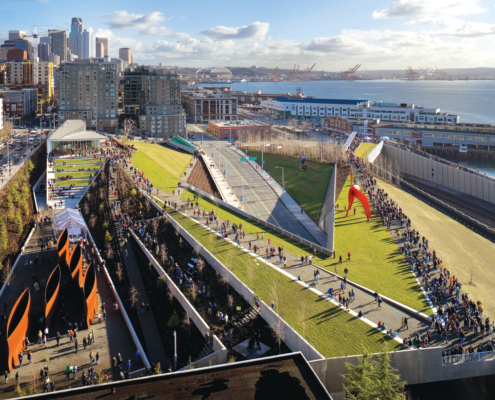 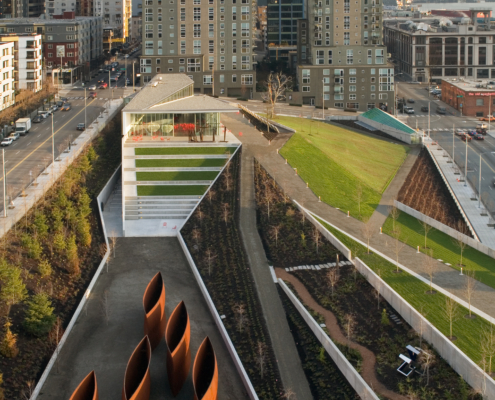 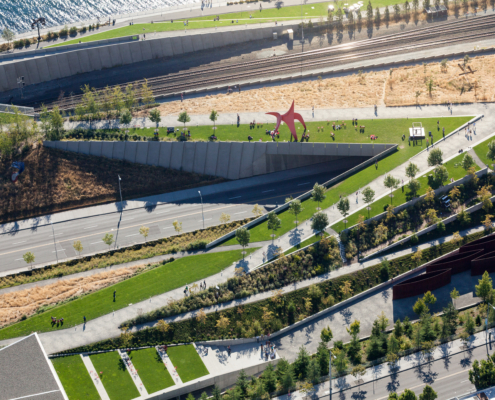 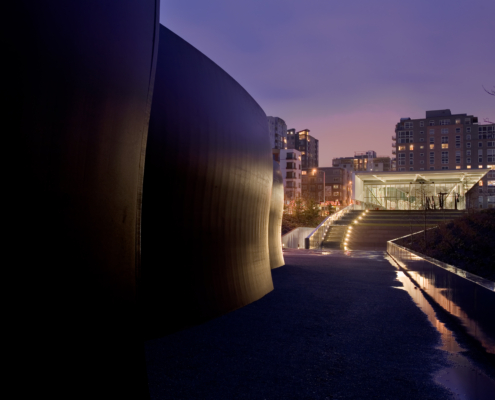 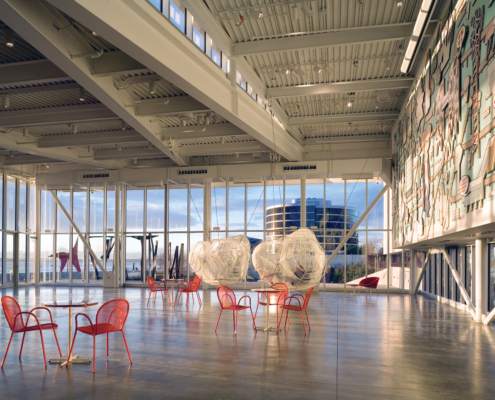 Envisioned as a new urban model for sculpture parks, this project is located on Seattle’s last undeveloped waterfront property – an industrial brownfield site sliced by train tracks and an arterial road. The design connects three separate sites with an uninterrupted Z-shaped “green” platform, descending forty feet from the city to the water, capitalizing on views of the skyline and Elliott Bay, and rising over existing infrastructure to reconnect the urban core to the revitalized waterfront. Formerly owned by Union Oil of California (Unocal), the area was used as an oil transfer facility. Before construction of the park, over 120,000 tons of contaminated soil were removed. The remaining petroleum contaminated soil is capped by a new landform with over 200,000 cubic yards of clean fill, much of it excavated from the Seattle Art Museum’s downtown expansion project. Winner of an international design competition, the design for the Olympic Sculpture Park capitalizes on the forty-foot grade change from the top of the site to the water’s edge. Planned as a continuous landscape that wanders from the city to the shoreline, this Z-shaped hybrid landform provides a new pedestrian infrastructure. Built with a system of mechanically stabilized earth, the enhanced landform re-establishes the original topography of the site, as it crosses the highway and train tracks and descends to meet the city. Layered over the existing site and infrastructure, the scheme creates a dynamic link that makes the waterfront accessible. The main pedestrian route is initiated at an 18,000-square-foot exhibition pavilion and descends as each leg of the path opens to radically different views. The first stretch crosses a highway, offering views of the Olympic Mountains; the second crosses the train tracks, offering views of the city and port; and the last descends to the water, opening views of the newly created beach. This pedestrian landform now allows free movement between the city’s urban center and the restored beaches at the waterfront. As the route descends from the pavilion to the water, it links three distinct settings: a dense and temperate evergreen forest; a deciduous forest of seasonally changing characteristics; and a shoreline garden including a series of new tidal terraces for salmon habitat and saltwater vegetation. Throughout the park, landforms and plantings collaborate to direct, collect, and cleanse storm water as it moves through the site before being discharged into Elliott Bay. As a “landscape for art”, the Olympic Sculpture Park defines a new experience for modern and contemporary art outside the museum walls. The topographically varied park provides diverse settings for sculpture of multiple scales. Deliberately open-ended, the design invites new interpretations of art and environmental engagement, reconnecting the fractured relationships of art, landscape, and urban life.