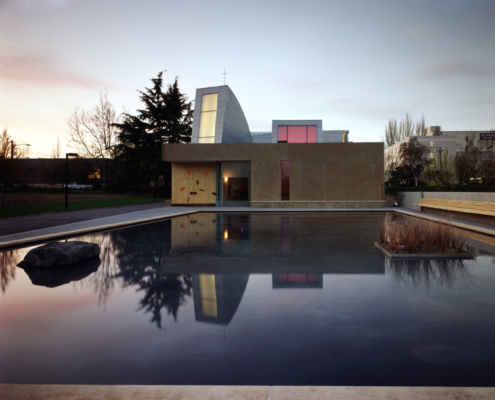 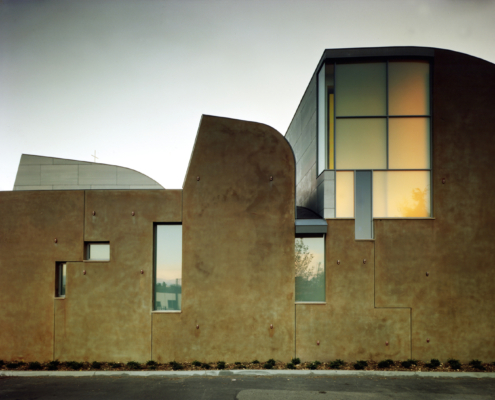 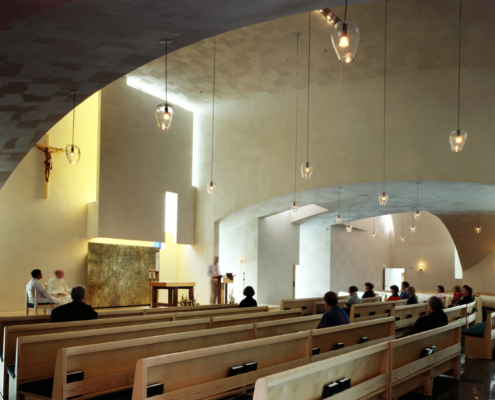 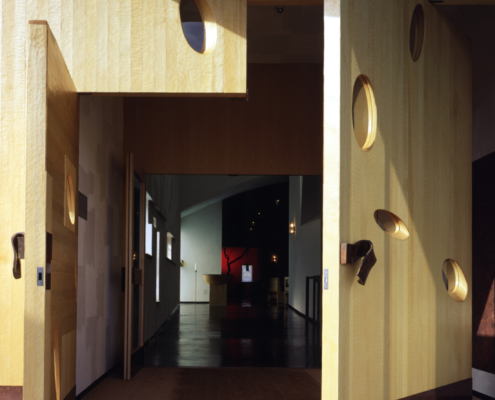 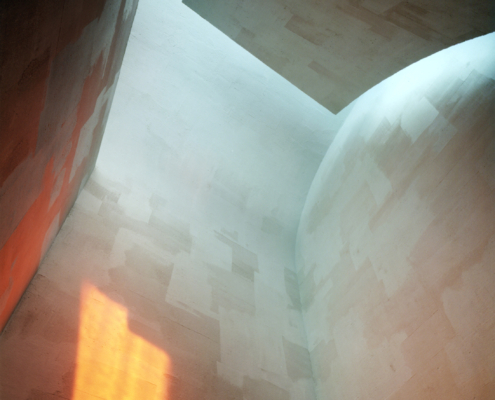 The Chapel of St. Ignatius, designed by Steven Holl Architects, is a Jesuit chapel for Seattle University. A series of light volume corresponds to a part of Jesuit Catholic worship service, such as the south facing light corresponds to the procession, a fundamental part of the mass. The chapel is sited to form a new campus quadrangle green space to the north, the west, and in the future, to the east. The elongated rectangular plan is especially suited to defining campus space as well as the processional and gathering space within. Directly to the south of the chapel is a reflecting pond. In the Jesuits ""spiritual exercises"", no single method is prescribed - ""different methods helped different people..."". Here a unity of differences is gathered into one. The light is sculpted by a number of different volumes emerging from the roof. Each of these irregularities aims at different qualities of light. East facing, South facing, West and North facing, all gather together for one united ceremony. The city facing north light corresponds to the Chapel of the Blessed Sacrament and to the mission of outreach to the community. The main worship space has a volume of east and west light. The concept of Different Lights is further developed in the dialectic combination of a pure colored lens and a field of reflected color within each light volume. A baffle is constructed opposite the large window of each “bottle of light.” Each of the baffles is back painted in a bright color; only the reflected color can be seen from within the chapel. This colored light pulses with life when a cloud passes over the sun. Each bottle combines the reflected color with a colored lens of the complementary color. At night, which is the time of gatherings for mass in this university chapel, the light volumes shine in all directions out across the campus like colored beacons. On occasion, for those in vigilant prayer, light will shine throughout the night. The visual phenomena of complementary colors can be experienced by staring at a blue rectangle and then a white surface. One will see a yellow rectangle; this complimentarily contributes to the two-fold merging of concept and phenomena in the chapel. The concept of “Seven Bottles of Light in a Stone Box” is expressed through the tilt-up method of construction. The integral color tilt-up concrete slab provides a more direct and economical tectonic than stone veneer. The building’s outer envelope is divided into 21 interlocking concrete panels cast flat on the chapel’s floor slab and on the reflecting pond slab. Over the course of two days these panels were put in place by a hydraulic crane, which strained at the ponderous weights of up to 80,000 lbs. “Pick pockets,” or hooks inset into the panels were capped with bronze covers once the panels were upright. Windows were formed as a result of the interlocking of the tilt-up slabs, allowing the 5/8” open slab joint to be resolved in an interlocking detail.