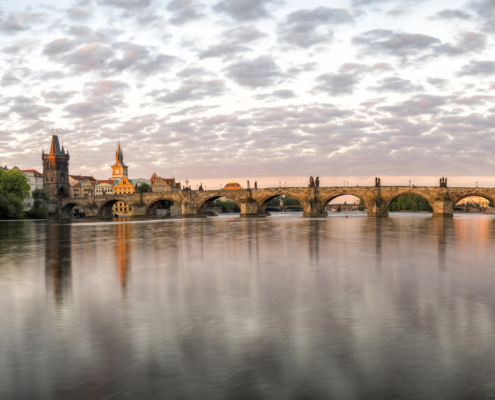 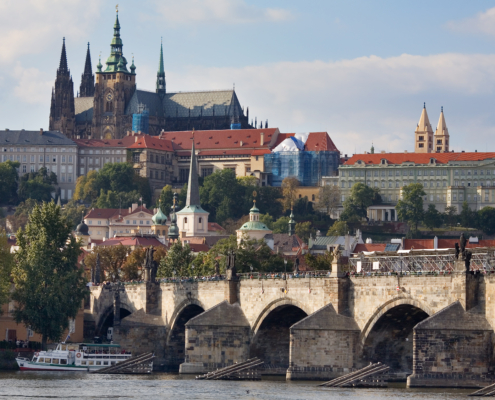 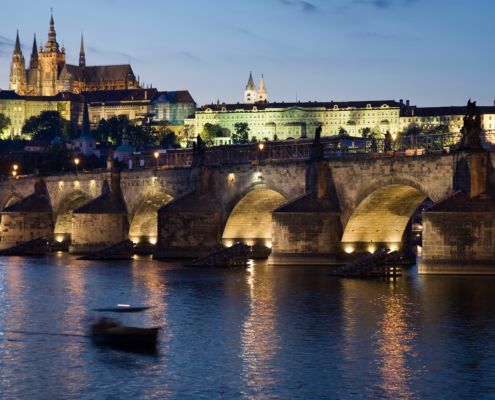 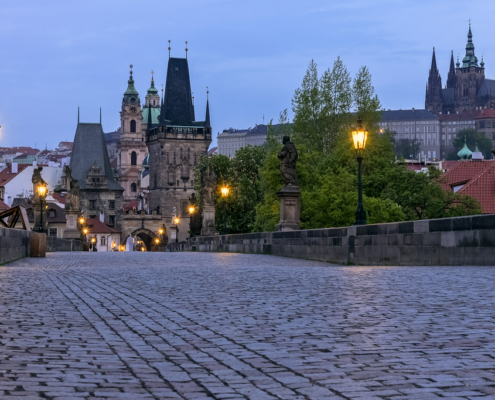 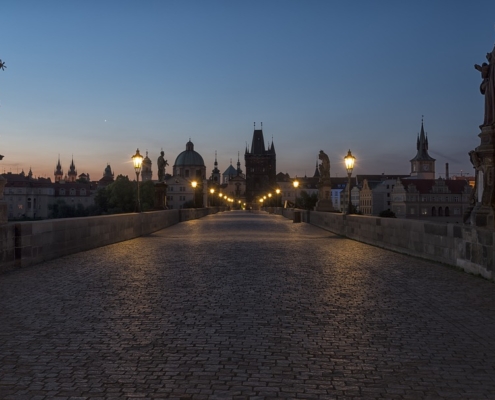 Charles Bridge is a stone Gothic bridge that connects the Old Town and Lesser Town. It was actually called the Stone Bridge (Kamenný most) during its first several centuries. Its construction was commissioned by Czech king and Holy Roman Emperor Charles IV and began in 1357. In charge of the construction was architect Petr Parléř whose other works include the St. Vitus Cathedral at the Prague Castle. It is said that egg yolks were mixed into the mortar to strengthen the construction of the bridge. Charles Bridge is one of the many monuments that were built during Charles' reign but it is not the first bridge that ever connected the Prague banks of the Vltava. Another bridge used to stand in its place - the Judith Bridge, which was the first stone bridge over the river. It was built in 1172 and collapsed in a flood in 1342. There is a tower standing on each end of the bridge. Both the Staroměstská věž on the Old Town end and the Malostranská věž on the Malá Strana end can be climbed for a view of Prague and the bridge from above. A total of Baroque statues began to be placed along either side of Charles Bridge in the 17th century. Now many of them are copies and the originals can be seen in the Lapidarium. The most popular statue is probably the one of St. John of Nepomuk, a Czech martyr saint who was executed during the reign of Wenceslas IV by being thrown into the Vltava from the bridge. The plaque on the statue has been polished to a shine by countless people having touched it over the centuries. Touching the statue is supposed to bring good luck and ensure your return to Prague. Charles Bridge is popular with local artists Charles Bridge is on the top of every Prague visitor's must-see list. It is also popular with Czech artists, musicians and souvenir vendors whose stands line both sides of the bridge year-round. A great time of day to come to the bridge is at sunset when one can enjoy a breathtaking view of the fully lit Prague Castle against the evening sky. The bridge is now a pedestrian zone and is almost constantly filled with people. If you want to have it all to yourself, go there at night or very early in the morning.

Information provided in part by: my Czech Republic