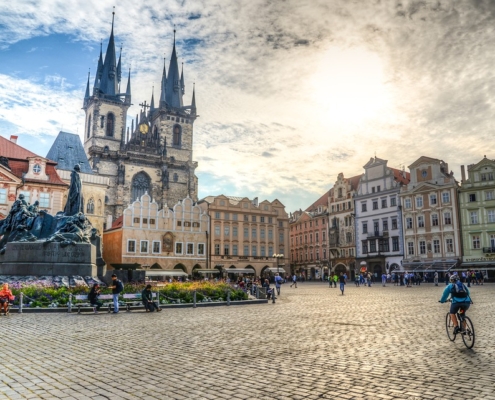 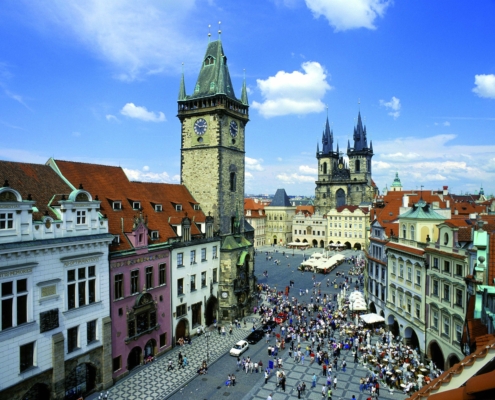 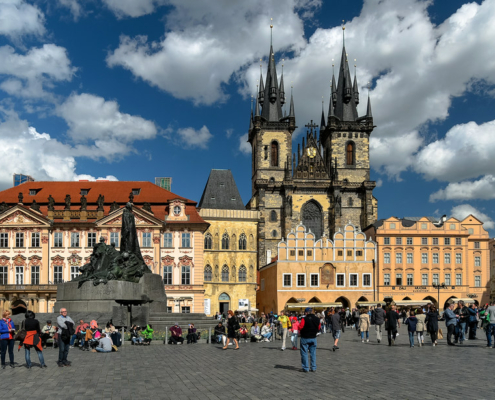 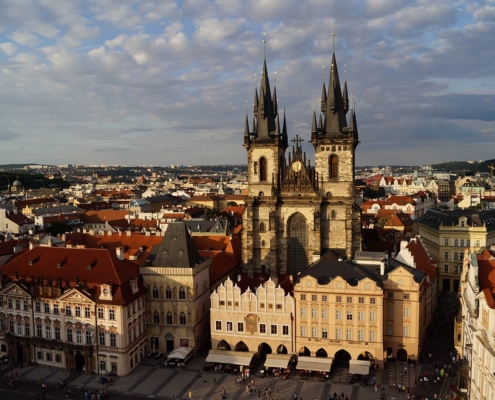 Old Town Square is an historic square in the Old Town quarter of Prague, the capital of the Czech Republic. It is located between Wenceslas Square and Charles Bridge. The square features buildings belonging to various architectural styles, including the Gothic Church of Our Lady before Týn, which has been the main church of this part of the city since the 14th century. Its characteristic towers are 80 m high. The Baroque St. Nicholas Church is another church located in the square. Prague Orloj is a medieval astronomical clock mounted on the Old Town Hall. The clock was first installed in 1410, making it the third-oldest astronomical clock in the world and the oldest one still in operation. The tower of the Old Town Hall is open to the public and offers panoramic views of the Old Town. The square's center is home to a statue of religious reformer Jan Hus, who was burned at the stake for his beliefs in Constance. This led to the Hussite Wars. The statue known as the Jan Hus Memorial was erected on 6 July 1915 to mark the 500th anniversary of his death. In front of the Old Town Hall, there is also a memorial to martyrs beheaded on that spot during the Old Town Square execution by Habsburgs, after the Battle of White Mountain. Twenty-seven crosses mark the pavement in their honour. The crosses were installed during the repairs of the Old Town Hall after the WW2, while a nearby plaque which lists the names of all 27 victims dates from 1911.On 3 November 1918, a Marian Column that had been erected in the square shortly after the Thirty Years' War was demolished in celebration of independence from the Habsburg empire. At Christmas and Easter, markets are held on the square; they resemble medieval markets. A tall decorated tree and a musical stage are set up.