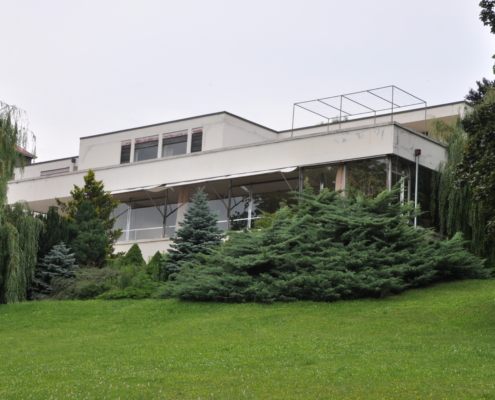 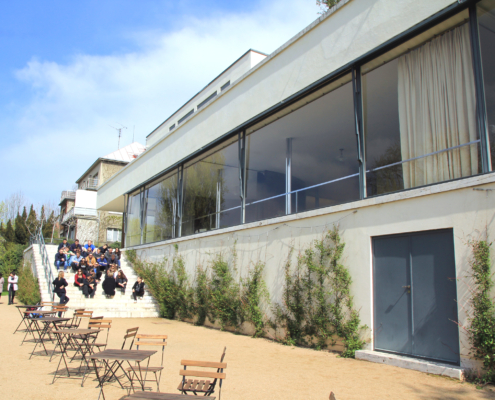 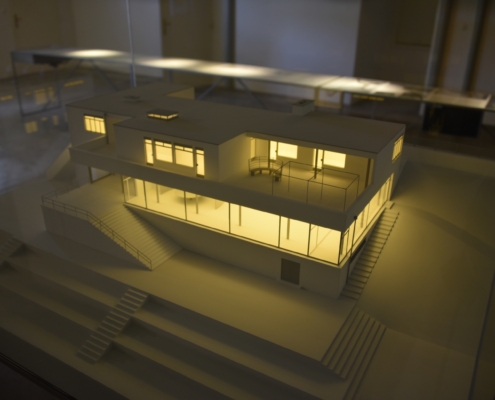 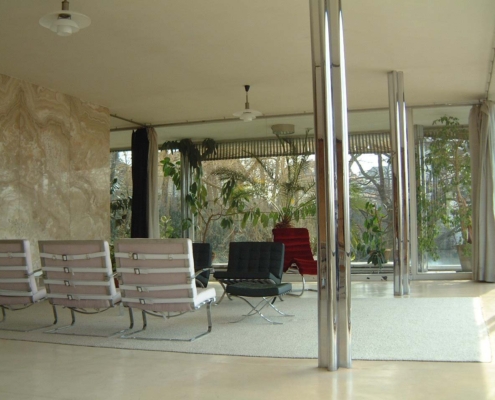 The Villa Tugendhat was commissioned by the wealthy newlyweds Grete & Fritz Tugendhat, a Jewish couple with family money from textile manufacturing companies in Brno. The couple met Mies van der Rohe in Berlin in 1927, and was already impressed by his design for the Zehlendorf house of Edward Fuchs. As fans of spacious homes with simple forms, Mies’ free plan method was perfect for the Tugendhats’ taste; however, he was not their only interest in an architect for their own home. They originally confronted Brno’s foremost modern architect at the time, Arnost Wiesner, but after visiting various projects by each architect, the Tugendhats ultimately went with Mies. Mies visited the site in September of 1928, and had already produced plans by December of that same year. He shared his design with the Tugendhat family that new year’s eve, and with a few minor changes new plans were drafted and set into motion. Mies deployed his new functionalist concept of iron framework, doing away with load-bearing interior walls and allowing for more open and light spaces. The villa was composed of three levels (including the basement), with different floor plans and forms, each relating differently to the sloping site. The Southeast and garden facades were completely glazing from floor to ceiling. The villa Tugendhat was a rather large house, complete with two children’s bedrooms and nanny’s quarters that shared a bathroom at the front of the house, while the master bed and bath were at the rear and connected to the terrace. A housekeeper’s flat and staff quarters were also included in the design. The villa was exceptionally expensive for its time considering the lavish materials, abnormal construction methods, and extraordinary new technologies of heating and cooling. The house was very advanced for a private residence, and while the overall cost was never known, estimates fall somewhere near five million Czech crowns. In 1930, that amount could have built at least 30 small family homes. Brno was already a hub of modern Architecture for Czechoslovakia in the 1920s, and the Villa Tugendhat was only met with moderate praise at best among the avant garde in its time. Many of the left wing elite in the art world viewed the new home as snobbish and overdone because its lush interior design and furnishings. Mies designed all the furniture in the house and chose precisely the placement of each piece and fixture. Although there was no art on the walls or decoration in or on the house, it never came across as bare or plain because of the rich materiality of onyx and rare tropical woods used throughout the home. The villa was built by building contractors in Brno, but the iron framework was constructed by contractors from Berlin. Steel frame construction was unusual for homes at that time, but brought with it many advantages that Mies was very occupied with and had already used in his famed Barcelona Pavilion – thinner walls, a free plan that could differ from floor to floor, large walls of glazing to open up rooms and connect them to the garden, etc. Over all the minimal and stable design became a hallmark in Mies’ residential accomplishments. The Tugendhat family left Czechoslovakia for Venezuela in 1938 shortly before The Munich Agreement and never returned. The Nazi Gestapo set up flats and offices in the abandoned house during the World War II, when most of the windows were blown out during air raids and the original furniture was eventually all stolen. The villa was used in 1992 for the formal signing that separated the country into the present day Czech Republic and Slovakia, and since 1994 has been open to the public as a museum. Heirs of Fritz and Grete Tugendhat filed for the reinstitution of the villa into their ownership in 2007 on the basis of laws in place regarding works of art confiscated during the Holocaust. The villa Tugendhat is currently under a multi-million dollar reconstruction/restoration that is scheduled to be finished at the beginning of 2012.