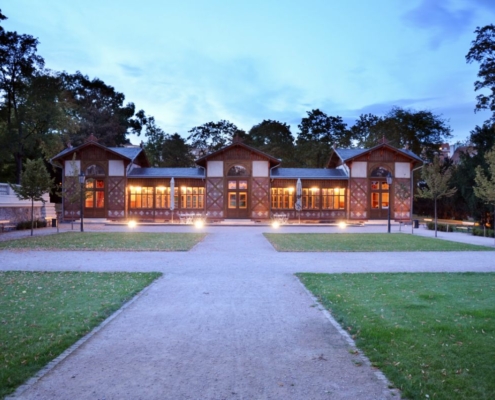 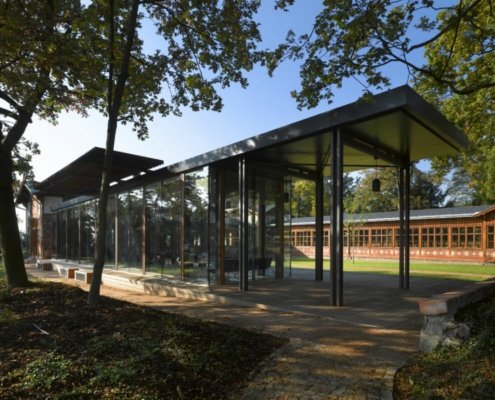 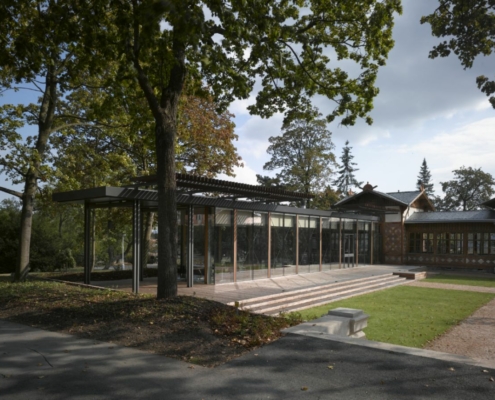 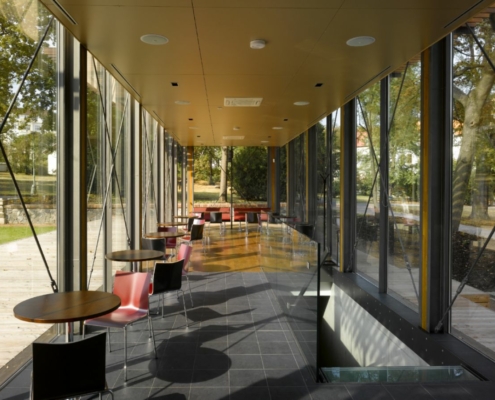 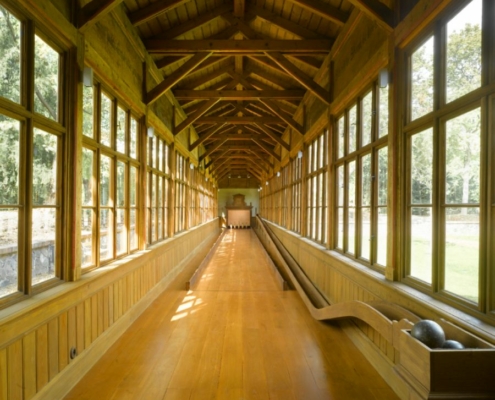 " "The pavilion is a real estate cultural monument of special importance, which is located within the “Vinhrady, Žižkov and Vršovice” monument zone in the Prague 2 metropolitan district. The pavilion designed by architect Josef Schulz was built in the beginning of 1890s. It is an integral, urban, architectural and artistic part of the Gröbe Villa and Gröbovka Park, which represents the Late neo-Romantic work of garden architecture. The building no. 2188 which served as a a shooting range and skittle alley, is a garden triple-wing single floor pavilion built northwards of the villa. It has a light seasonal construction. The original load-bearing walls are half-timbered nogged with facing bricks. The building had been used for its original purpose only shortly. Later, the municipality adapted it to a nursery. This children facility had been recently in operation. Due to the fact that the pavilion was rebuilt to a nursery and used all year round, it was exposed to considerable temperature differences and increased wood moisture, particularly in winter. The reason for this moisture was condensation of vapours on the building envelope which has not adequate thermal resistance. The main aim is to recover the historical pavilion and open it for public, to use it and its vicinity as a place of relaxation and leisure, to establish sanitary facilities for park visitors and to restore the authentic historical building including substantially damaged art-and-craft elements – carved decoration, wall timbering, paintings and to restore them to maximum extent. It is considered to implement already totally lost elements preserved only in drawings – skittle alley, wooden dadoing, and entrance doorways. The recovery scheme of the pavilion is the “restoration of artistic work”. The project plans to maintain and recover original appearance of the historical building and, thus, does not comply intentionally with current standards for development and returns the building to the maximum extent to its original appearance from the year 1888. In response to the transparent expression of the historical building, the complementary building is covered by a fully glazed envelope along its entire parameter. The visible structural system combines wood, steel and glass. In relation to historical half-timbered walls, the building tectonics is emphasized by contours of columns in the facade and steel tie rod bracing. An expressive roof landscape of the Schulz’s pavilion is complemented with bracketed pergolas with wooden fins overhanging the roof of a complementary building and its vicinity. The termination of the west wing is reflected in a roof overlap and creation of covered terrace. The building is connected to the existing historical pavilion by means of glazed “neck” with a ramp.""