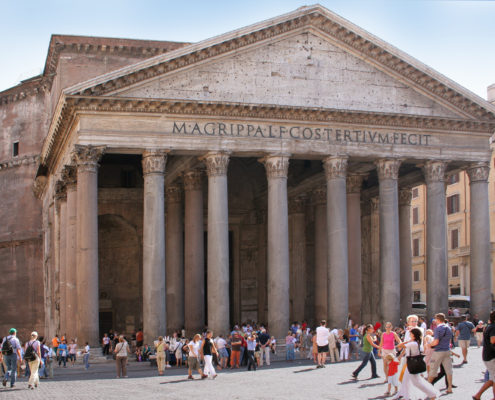 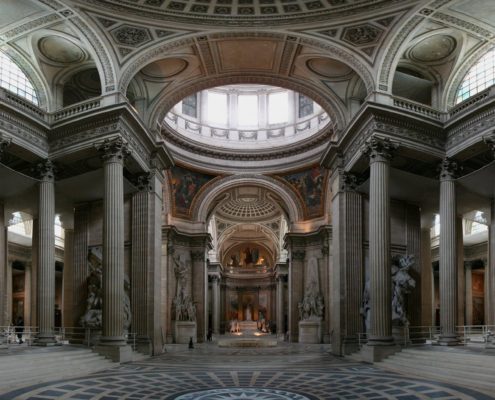 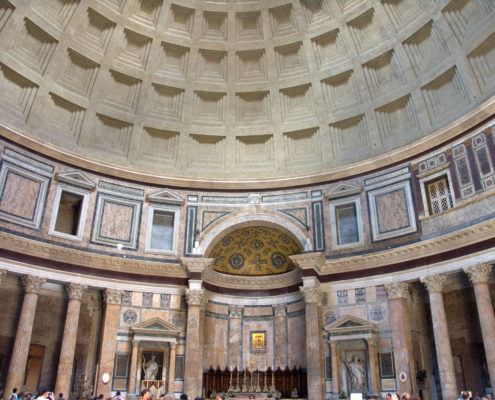 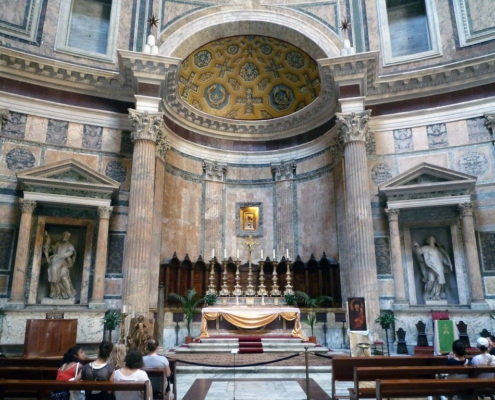 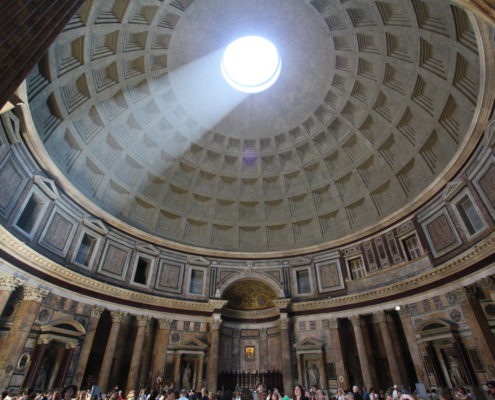 Pantheon, building in Rome that was begun in 27 BC by the statesman Marcus Vipsanius Agrippa, probably as a building of the ordinary classical temple type—rectangular with a gabled roof supported by a colonnade on all sides. It was completely rebuilt by the emperor Hadrian sometime between AD 118 and 128, and some alterations were made in the early 3rd century by the emperors Septimius Severus and Caracalla. It is a circular building of concrete faced with brick, with a great concrete dome rising from the walls and with a front porch of Corinthian columns supporting a gabled roof with triangular pediment. Beneath the porch are huge bronze double doors, 24 feet (7 metres) high, the earliest known large examples of this type.

The Pantheon is remarkable for its size, its construction, and its design. Until modern times, the dome was the largest built, measuring about 142 feet (43 metres) in diameter and rising to a height of 71 feet (22 metres) above its base. There is no external evidence of brick arch support inside the dome, except in the lowest part, and the exact method of construction has never been determined. Two factors, however, are known to have contributed to its success: the excellent quality of the mortar used in the concrete and the careful selection and grading of the aggregate material, which ranges from heavy basalt in the foundations of the building and the lower part of the walls, through brick and tufa (a stone formed from volcanic dust), to the lightest of pumice toward the centre of the vault. In addition, the uppermost third of the drum of the walls, seen from the outside, coincides with the lower part of the dome, seen from the inside, and helps contain the thrust with internal brick arches. The drum itself is strengthened by huge brick arches and piers set above one another inside the walls, which are 20 feet (6 metres) thick.

The porch is conventional in design, but the body of the building, an immense circular space lit solely by the light that floods through the 27-foot (8-metre) “eye,” or oculus, opening at the centre of the dome, was revolutionary; possibly this was the first of several great buildings of antiquity that were designed to favour the interior rather than the exterior. In contrast to the plain appearance of the outside, the interior of the building is lined with coloured marble, and the walls are marked by seven deep recesses, screened by pairs of columns whose modest size gives scale to the immensity of the rotunda. Rectangular coffers, or indentations, were cut in the ceiling, probably under Severus, and decorated with bronze rosettes and molding.

The Pantheon was dedicated in AD 609 as the Church of Santa Maria Rotonda, or Santa Maria ad Martyres, which it remains today. The bronze rosettes and moldings of the ceiling and other bronze embellishments have disappeared over time, and a frieze of stucco decoration was applied to the interior directly beneath the dome in the late Renaissance. Otherwise, the building exists entirely in its original form. The structure has been an enduring source of inspiration to architects since the Renaissance.