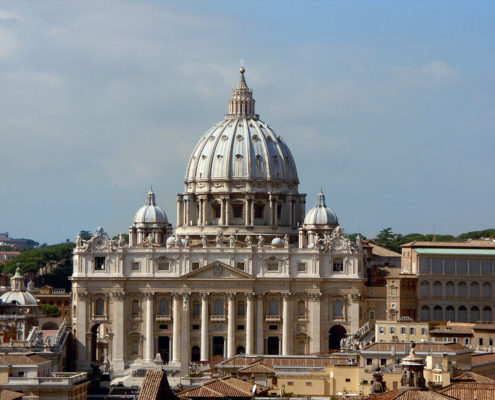 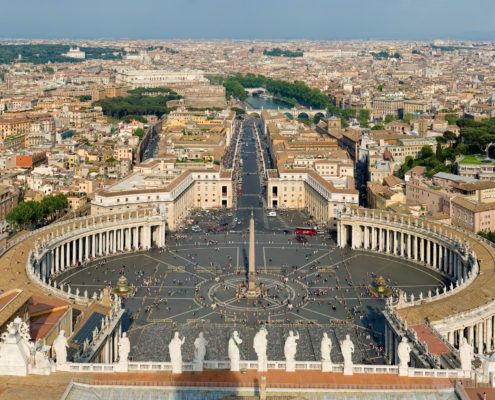 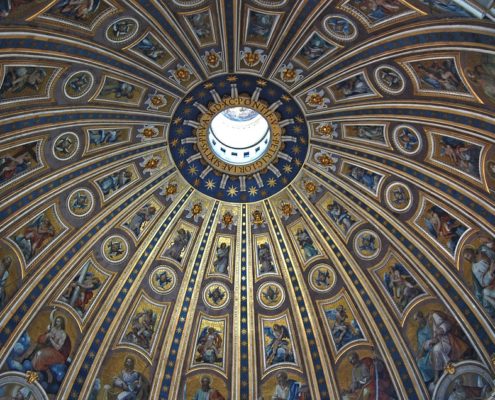 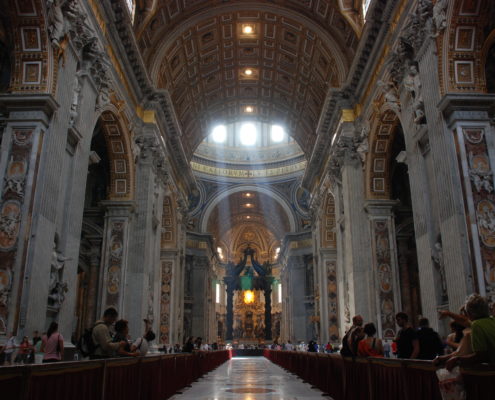 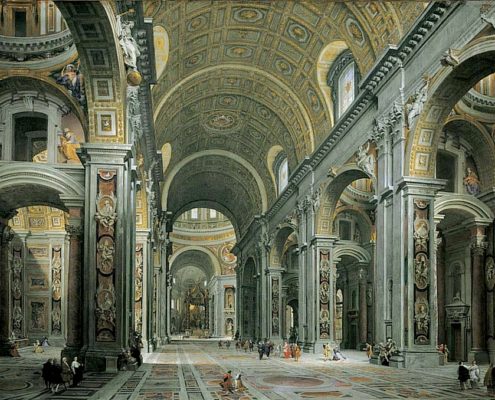 St. Peter’s Basilica, also called New St. Peter’s Basilica, present basilica of St. Peter in Vatican City(an enclave in Rome), begun by Pope Julius II in 1506 and completed in 1615 under Paul V. It is designed as a three-aisled Latin cross with a dome at the crossing, directly above the high altar, which covers the shrine of St. Peter the Apostle. The edifice—the church of the popes—is a major pilgrimage site.

The idea of building the church was conceived by Pope Nicholas V (reigned 1447–55), who was prompted by the state in which he found Old St. Peter’s Basilica—walls leaning far out of the perpendicular and frescoes covered with dust. In 1452 Nicholas ordered Bernardo Rossellino to begin the construction of a new apse west of the old one, but the work stopped with Nicholas’s death. Paul II, however, entrusted the project to Giuliano da Sangallo in 1470.

On April 18, 1506, Julius II laid the first stone for the new basilica. It was to be erected in the form of a Greek cross according to the plan of Donato Bramante. On Bramante’s death (1514) Leo Xcommissioned as his successors Raphael, Fra Giovanni Giocondo, and Giuliano da Sangallo, who modified the original Greek cross plan to a Latin cross with three aisles separated by pillars. The architects after Raphael’s death in 1520 were Antonio da Sangallo the Elder, Baldassarre Peruzzi, and Andrea Sansovino.

After the sack of Rome in 1527, Paul III (1534–49) entrusted the undertaking to Antonio da Sangallo the Younger, who returned to Bramante’s plan and erected a dividing wall between the area for the new basilica and the eastern part of the old one, which was still in use. On Sangallo’s death (1546) Paul III commissioned the aged Michelangelo as chief architect, a post he held under Julius III and Pius IV. At the time of Michelangelo’s death in 1564, the drum for the massive dome was practically complete. He was succeeded by Pirro Ligorio and Giacomo da Vignola. Gregory XIII (1572–85) placed Giacomo della Porta in charge of the work. The dome, modified from Michelangelo’s design, was finally completed at the insistence of Sixtus V (1585–90), and Gregory XIV (1590–91) ordered the erection of the lantern above it. Clement VIII (1592–1605) demolished the apse of Old St. Peter’s and erected the new high altar over the altar of Calixtus II.

Paul V (1605–21) adopted Carlo Maderno’s plan, giving the basilica the form of a Latin cross by extending the nave to the east, thus completing the 615-foot- (187-metre-) long main structure. Maderno also completed the facade of St. Peter’s and added an extra bay on each end to support campaniles. Although Maderno left designs for these campaniles, only one was built, and that was of a different design executed by Gian Lorenzo Bernini in 1637. Under the commission of Alexander VII(1655–67) Bernini designed the elliptical piazza, outlined by colonnades, that serves as the approach to the basilica.