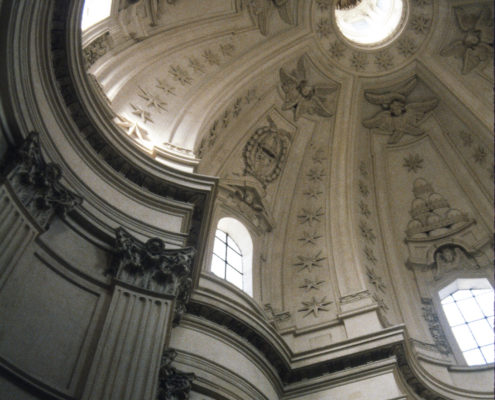 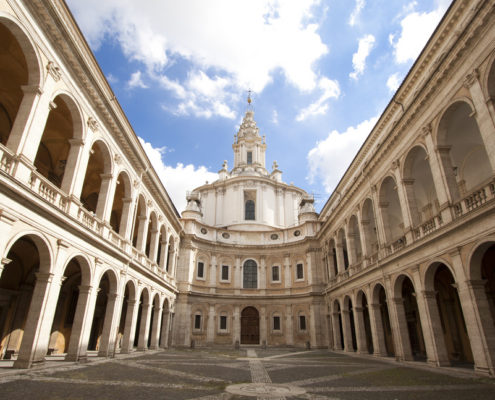 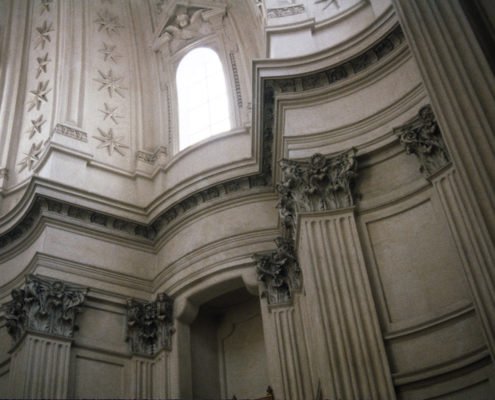 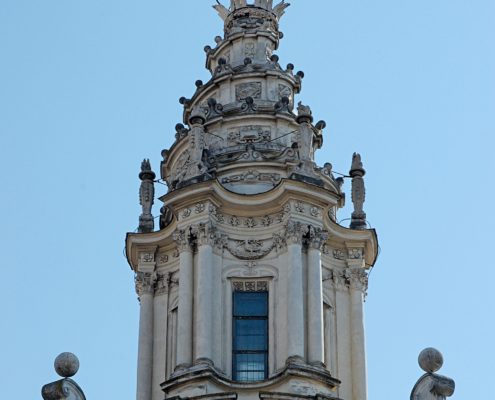 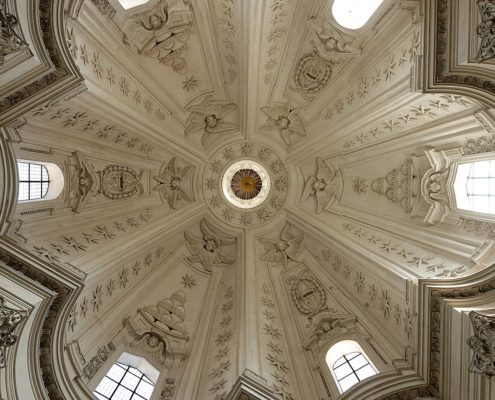 The startling Sant'Ivo sits at the far end of the courtyard of the Palazzo della Sapienza (house of knowledge), which until 1935 was the seat of the University Rome. The palazzo now houses the Italian State Archives containing all official documents from the 9th century to the founding of the Italian Republic in 1870. The University was founded in 1303 by Pope Boniface VII and expanded into a number of buildings near the 8th-century church, San Eustachio, which sits behind the Pantheon.

One of Borromini's hallmarks is his use of convex and concave exterior and interior surfaces that play against each other. When you enter La Sapienza, the breathtaking white Travertine marble façade of St. Ivo rises up before you at the far end of the long courtyard. Across the concave façade, Borromini gracefully continued the lines of the Palazzo's two stories of arched colonnades. Atop the church sits a hexagonal drum that houses the dome, its convex walls supporting a stepped pedestal. Next comes the lantern, also hexagonal, but with concave sides.

To top it off, Borromini crafted the most unique spire of any church in Rome. It resembles a spiral staircase, reminiscent of the friezes on the nearby columns of Trajan and Marcus Aurelius. Borromini topped the spire off with a laurel wreath, a bronze orb, a dove, and a crucifix. Some speculate that Borromini either based the design of the spire on a conch shell, which he kept in his study, or drawings of the Tower of Babel. Others have compared the spire to the stinger of a bee, which is of course the symbol of the Urban VIII's Barberini family.

On entering the church, one can easily see why art historians call it Borromini's chef d'oeuvre. Once again we see Borromini's use of alternating concave and convex surfaces and geometric shapes, here miraculously united to make concrete the beauty of mathematics and its universal forms.

For the small space, the architect superimposed two triangles on top of one another to form an enormous Star of David and create a hexagonal floor plan in the center of the church. The alternating points of the star, however, are rounded off either convex or concave and form niches that slope upward to the dome. The dome itself is segmented into six sections, each one decorated with the Chigi family mountains or stars. At the apex of the dome, the lines converge at a perfect circle that forms the base of the lantern.

Information provided in part by: www.willkarp.com