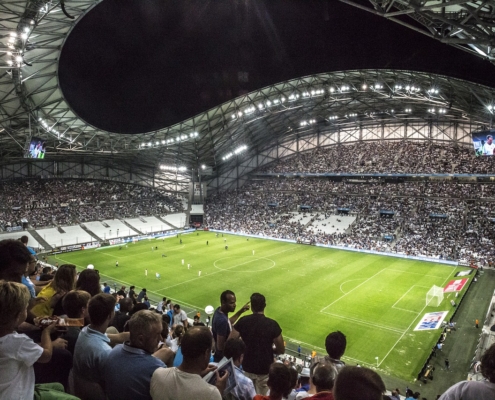 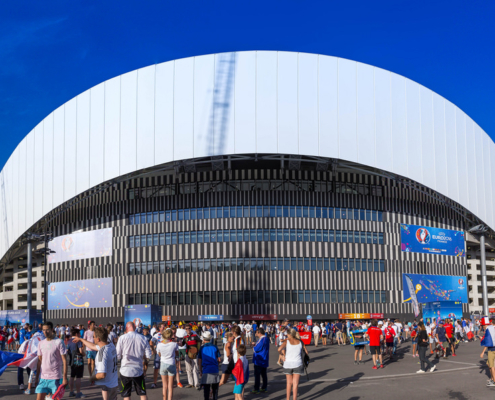 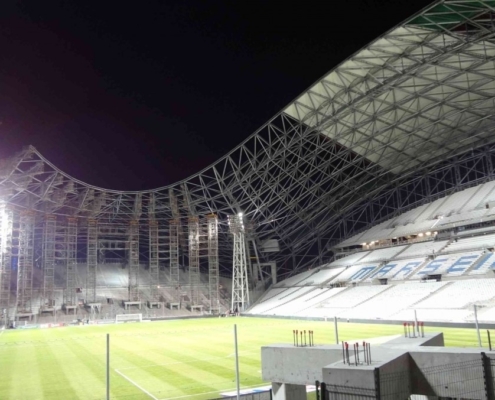 French firm SCAU designed the undulating fibreglass roof of Marseille's football stadium, [they were] asked to refurbish the existing Stade Vélodrome in preparation for the European football championship, extending its stand capacity from 60,000 to 67,000 and developing a new roof to shelter spectators. "It figured at the forefront of the brief in order to protect the stands from bad weather and the Mistral, it has become the new emblem of the Stade Vélodrome, and its raw material," said SCAU. “[The] large, white, translucent undulating roof spreads out to land above the stands and swathe them, like a vast shell come out of the sea." The roof is made from teflon-impregnated fibreglass canvas designed to require minimal maintenance. The material is stretched over a metal framework to give the roof its undulating silhouette and create a scalloped texture across its surface. The translucent material is illuminated from inside at night to turn the building into a beacon for the area. The stadium also features an open-air pitch thanks to a well in the centre of the roof. The stadium was originally designed in the 1930s by French architect Henri Ploquin as an all-round sporting venue with a cycling track, leading to its name Stade Vélodrome – a combination of stadium and velodrome. It opened in 1937 and the next year hosted the 1938 World Cup. It underwent several renovations in the 1970s, 1980s and 1990s – including the removal of its cycling track – but retains its original name.

Information provided in part by: Dezeen